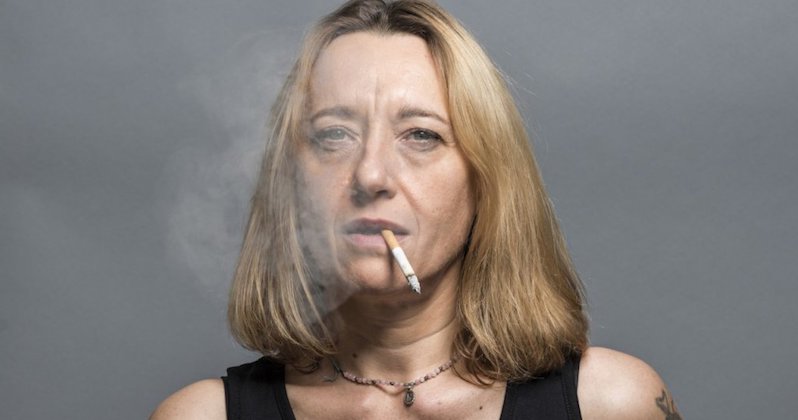 Between now and the announcement of the 2020 Albertine Prize winner in December, we’ll be running a series of Q&As with the five shortlisted nominees.

It feels apt that our first conversation, today of all days, is with Virginie Despentes, the French feminist critic and author of the Vernon Subutex trilogy, which has been widely praised. In 2018, Booker International Prize winner Jennifer Croft spoke to Frank Wynne, nominated alongside Despentes this year, along with some of Despentes’s other translators for Lit Hub. Earlier this year, Wynne’s translation of the second installment was published in English.

Vernon Subutex 1 introduces us to the titular character, a down-on-his-luck record store owner who is pitched into a life of economic precarity and violence, a world both eerily unreal and full of expanded, interpersonal networks enabled by unregulated spaces like the internet.

As Despentes makes clear, the specter of unrest is a defining feature of our moment, in Europe, the US, and elsewhere. It is everywhere, she says, “in film and TV series, in our exchanges on the internet, in the street, in the repression of protests, in the expression of political anger, in the economy, ecologically.”

Your main character, Vernon Subutex, washed-up record store owner sliding into instability, is an antihero. This is one of the first times you focus on a male protagonist. Could you tell us how you created this character?

The idea for the character of Vernon came to me during the wave of evictions following the 2008 financial crisis; I spent a lot of time in Spain and the ease with which we can demolish a nation made an impression on me. People found themselves on the streets from the weight of their debts, without the prospect of going back to work as the country was crushed by unemployment.

Their whole lives they had paid their bills and sorted things out to support their families and at the age of 50 or older they found themselves homeless. In Europe, for someone my age, this was something new. In France, the propagation of misery is a relatively recent societal choice, which has all sorts of consequences. I thought of a record store owner because I was a record dealer in the late 1980s and I knew a lot of people who worked in vinyl.

It’s been said several times about this novel and it’s rather flattering and so that pleases me, but this was not my intention from the beginning. I have many problems in life, but for the moment megalomania isn’t one of them and I don’t see myself sitting down in front of my computer with the idea of creating a portrait of a generation. I instead constructed a story around disappearance.

Reality is unstable, even though our consciousness evolves very slowly. What relationships do we continue to maintain with the “phantom members”—rather they be people, places, concepts, or relationships, that interested me. I am 50 years old and I feel that I am progressively entering into a mental universe in which I am at greater advantage in relationship to that which has disappeared than that which really exists. I have the impression that this is equally the case of our cultures—for example, we continue to reflect as if we lived in the pre-internet world, while the internet has turned everything on its head, and we haven’t managed to enter this new world with our thoughts.

We become strangers in our own realities and this experience interests me. Vernon Subutex is a novel in which there are many characters, and the only thing they have in common is that they don’t get as far as fully entering reality. Whether they are young or old they persist in discussing with the dead.

This is what interested me at the record store—that is to say, in rock and post-punk and hardcore and funk, all these forms of guitar music are an immense crossroads intermingling people who have nothing in common other than a sincere passion. If we think of the clientele at a record store in the 1990s and we follow the paths of one or another, we find ourselves just about everywhere in society. And the openness of rock culture to far-right influences in the past 20 years particularly fascinated me.

I tried to write down exactly what I hear around me, but also what I was exposed to online because, even if social networks work to close us off in clusters of information that confirm what we already want to perceive of reality, the web puts us in contact with discourses that we wouldn’t have had access to 20 years ago. It required reading the far-right press to know what was going on in the mind of an anti-Semite, today it’s enough to have a bit of time to lose and to allow yourself to be lead by Google to be familiar with it.

Violence is central to your text, whether it be in the themes evoked (social violence with Vernon’s descent, domestic violence with Patrice who physically abuses his wife, suicide, drug addiction, alcohol) or in the use of language. Would you say that this violence is the central theme of the book, the thread that joins all the characters?

Violence is a theme that obsesses me. My own violence, my perception of an omnipresent violence—in film and TV series, in our exchanges on the internet, in the street, in the repression of protests, in the expression of political anger, in the economy, ecologically. I see a rise in violence in all domains—you feel that in all the stories that I write. It is very difficult to respond to violence by means other than violence. It is very difficult not to reproduce violence one we have been exposed to it.

I don’t remember a particular piece of literary advice, but I know that Stephen King’s book On Writing: A Memoir of the Craft helped me to understand a great deal about writing.

Who are the contemporary authors that you admire?

Joan Didion, Zadie Smith, David Simon, Ann Rice, Chimamanda Ngozi Adichie, Stephen King, Mariana Enriquez… in fact the list would be quite long; it seems to me that I am pretty good at admiring authors.

Blank page syndrome in the sense of a loss of inspiration does not scare me. I have a feeling that it’s sufficient to leave things as they are and to go take a walk and to interest oneself a bit in what is happening elsewhere and the desire to write a story will easily return.

However, the type of mental block that Joseph Conrad summarizes better than anyone—the state that consists of having a scene in mind that you want to write, knowing the dialogue, the place and the action, knowing everything that you want and spending entire days at your desk without being capable of writing the first words—that, I don’t know how one fights it.

This happens to me all the time and I try to remember how I moved beyond it the other times and I don’t have the least idea. Of my other novels I remember nothing but interminable moments of writer’s block, and no longer the writing phases at all.