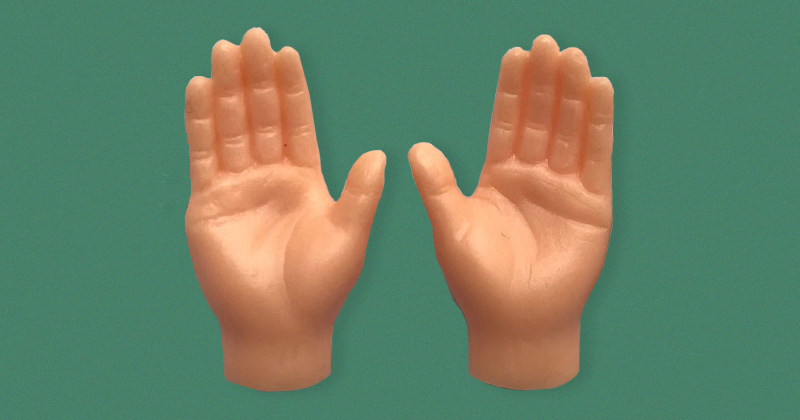 Victorians were obsessed with the rumor that George Eliot had two different-sized hands.

The Victorian writer George Eliot, whose true name was Mary Ann Evans, was the subject of much gossip during her lifetime, as well as after her death. She, the daughter of a land agent who rose to literary prominence in the 1850s and 60s, scandalously maintained a domestic partnership, and cohabitated, with the (married) writer George Henry Lewes for twenty-one years, until his death. This was after she had refused a marriage proposal and had begun several relationships with married men. Lewes died in 1878, and afterwards, in 1880, she married for the first time, to a banker twenty years younger, named John Walter Cross, who had previously called her “Aunt,” given the closeness between their families. She was sixty-one. While on their honeymoon in Venice, he mysteriously jumped out of a window into the Grand Canal, which many have interpreted as reflecting a knee-jerk panic at the realization of what Rebecca Mead slyly terms “a grotesque inequity of desire.” Eliot died eleven months later, of kidney failure. The literary world mourned.

But many years later, circa 1907, according to the great historian Kathryn Hughes in her wonderful book Victorians Undone, rumors began to circulate that she had been rather unevenly-bodied in life, with two very different-sized hands. This was not the first time Eliot’s looks had been the scuttlebutt of London; her face, which had a larger than average nose and less than a full set of teeth, had been enthusiastically excoriated by many of the era’s literary taste-makers, from William Michael Rossetti (Christina’s brother) to the nasty Henry James, who meanly called her “magnificently ugly, deliciously hideous.” But after her death, a descendant eager to show how his side of the family’s ancestors had given inspiration for some of Eliot’s best characters wrote in an unofficial biography that her hands were lopsided, with her right, dominant hand significantly bigger than her left.

This was, apparently, due to Eliot’s roots as a farm girl. Her right hand was evidently larger because she had pounded a large quantity of butter and cheese with it in her early years. The descendant, Reverend William Mottram, had gotten the information while doing research for his biography, using material that Eliot’s first biographer, Mathilde Blind, had gathered. She had completed an interview with Cara Bray, who had known Eliot back on the farm. Bray had said Eliot had been proud of her large right hand when she showed it to her. Blind had included this detail in her final manuscript.

This detail horrified Eliot’s family (well, both the Evans family and the Lewes family), and they insisted that this detail was a falsehood. Dairy work was solidly working-class, and this reassertion of Eliot’s humble roots seemed poised to wobble her status as one of the greatest writers and intellectuals of the age. Additionally (though this is a bit of an anachronistic point, but may also have factored in the family’s anxiety), continuously discussing George Eliot’s body as captivatingly ungainly boils her accomplishments down to physical features, which were not her fault, no one’s business, and which caused her pain throughout her lifetime. Furthermore, “It wasn’t just that the story of George Eliot’s large right hand gave her the clumsy body of a working-class country girl,” Hughes writes, “it hinted that she had the sexual morals of one too.” After all, mashing buttermilk alone wasn’t, in all likelihood, enough to cause her hand to grow so large.

But Hughes, the historian writing more than a century later, solves the mystery for us. Acquiring George Eliot’s right-hand glove, she determines that Eliot’s glove size was a 6.5. In Victorian England, the smallest possible glove size a woman could have was a size 6. Eliot’s hands were downright tiny. Even if, somehow, the right was larger than the left, it could not have been by a discernible amount.