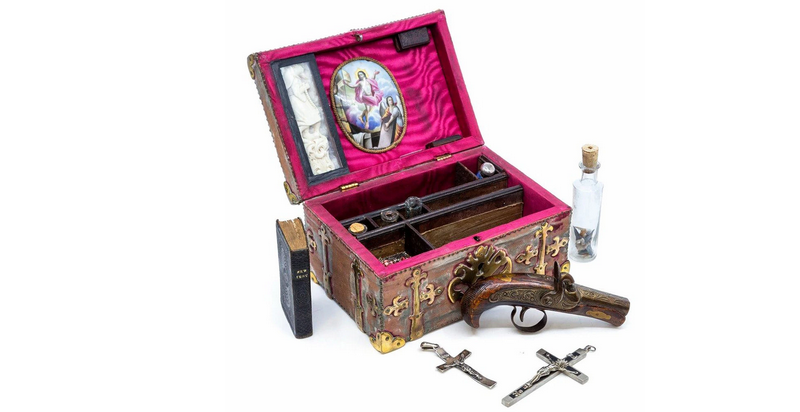 It is a truth universally acknowledged that vampires make for the best entertainment content. They do, they just do, and they always have.

In the latest news about humankind’s obsession with vampires, Aimee Ortiz reports in The New York Times that an auction house in England is accepting bids on a nineteenth-century vampire slaying kit, one which was likely created by a fan of Bram Stoker’s 1897 novel Dracula or another vampire story, rather than as a toolkit with anticipated practical use. The lot, which is expected to go for somewhere between £2,000 to £3,000, is comprised of a pistol, three crucifixes, an enamel painting of the Resurrection of Christ, rosary beads, a bunch of shark’s teeth, an ivory carving of a wolf, several mysterious vials and bottles (once probably full of holy water), two pairs of pliers, a mother-of-pearl pocketknife, and a 19th-century Bible.

The inclusion of some of the objects, like the crucifixes and rosaries, are self-explanatory, while others are completely enigmatic (shark teeth???). According to Ortiz, most historians consulting on the kit believe that its contents (which date to various historical periods) were assembled towards the beginning of the twentieth century, and that they do not reflect an actual belief in the existence of vampires. (If it were a serious kit, some historians have mentioned, there would be silver bullets, stakes, and much larger knives in the case, as well as herbs.)

Jeff Podoshen, a marketing professor at Franklin & Marshall College in Lancaster, Pa., whom the Times mentions is “a leading expert on dark tourism,” mentioned that “while there were some ‘true believers’ in vampires,” during this era, “items like the vampire slaying kit were popular with fans of the author Bram Stoker,” whose novel Dracula described a vampire-slaying kit in detail. (Many years earlier, in 1872, Joseph Sherdian Le Fanu’s sultry female-vampire story “Carmilla,” also mentioned, in passing, one such kit.)

So, in case you were wondering if the Victorians LARPed . . . well, yes, I suppose they did.

Hansons Auctioneers of Derbyshire, England, which is auctioning off the kit, will be accepting bids starting today!