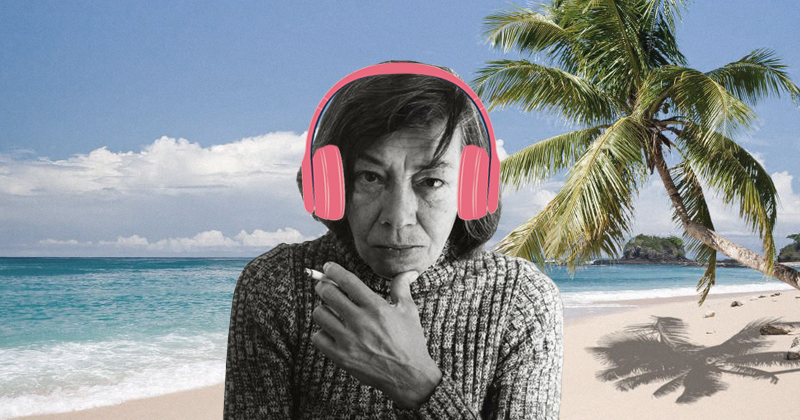 In 1979, Highsmith joined Roy Plomley on Desert Island Discs, the BBC Radio show in which famous people choose exactly what the name implies. Plomley, of course, starts out with a softball: “Miss Highsmith, could you endure prolonged loneliness?” Ah, the most contemporary question there is. “I think I could better than most people, probably,” High smith responds. Fair enough. When Plomley asks her what music means in her life, she says:

Quite a bit. I would not like to think of a day without listening to some kind of music, in fact any kind. The reason is, when I become lost or I get discouraged or something—any kind of music has a beat to it, whether classical or pop, and it’s like another kind of time that I get back into a certain ability to move.

The rest of the interview is punctuated by Highsmith’s favorite songs. “I chose what I happen to like, what I consider inspired or thrilling somehow,” Highsmith explains. You can listen to the whole thing over at BBC Radio 4, but if you just want the playlist, her choices are below.

1. Wolfgang Amadeus Mozart, Piano Concerto No. 23 in A major

“I think [I chose this] because it was one of the first ones when I was oh, twenty years old or so, that I liked, as my favorite Mozart at that time.”

“I think [it] is very dramatic. I had an artist friend, a painter, and she was doing a portrait of me, and she sometimes put it on to play, so I associate it with that, and her own seriousness.”

“This I like because it’s one of the few which is sung in German instead of Latin. And it’s also comical, about a young girl whose father wants her to stop drinking coffee, because it was a new institution. So the song I like, the father says she can’t get married unless she stops drinking coffee, so she says, all right, I’ll stop, I prefer to get married.”

“I like a certain chorus in it, called “In Tears of Grief,” in English. That is number 78, if I recall.”

5. Vivienne Segal & Harold Lang, In Our Little Den of Iniquity (from Pal Joey)

“I think [Pal Joey] is a brilliant piece of popular music.”

“He sounds very troubled. He sounds like present day life, in a sense. And I like his orchestration.”

“I think this is very refreshing, very poetic.”