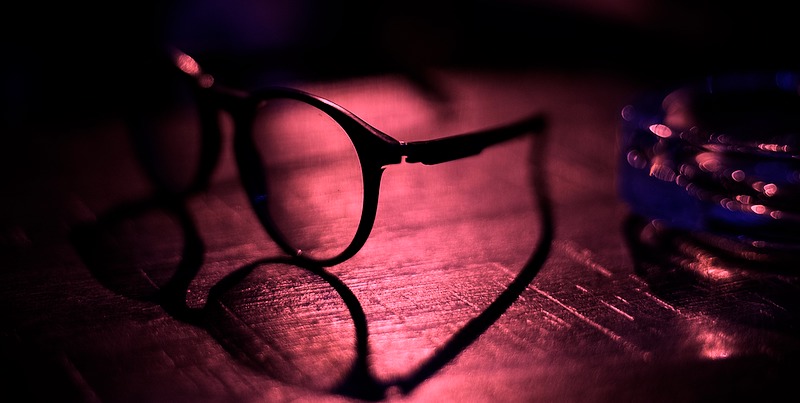 A sinful reading admission: I like characters that are not well-rounded, and protagonists that have an uneasy relationship to being main. It’s a relief to encounter them. Haven’t you ever felt like a not-so well-rounded person, felt unreal, insubstantial in comparison to others? I’m not referring to insecurity or imposter syndrome so much as the fraying, febrile experience of dissociation, of feeling like your past and present do not cohere to real personhood.

Elena Ferrante’s term for it is frantumaglia, a word from her mother’s dialect that inscribes the self as a jumble of fragments; to experience frantumaglia is to be an “unstable landscape,” racked with contradictory sensations that threaten to tear you apart. Ferrante writes that this inherited dissociative state directly relates to the ability to speak as oneself: “…the fear that the capacity to express myself would get stuck—as if the organs of speech had been paralyzed—and everything I’d learned to control, from the first year of life until now, would start fluctuating on its own, dripping or hissing out of a body becoming a thing, a leather sack leaking air and liquids.”

Meeting sufferers of frantumaglia in fiction doesn’t guarantee pleasurable reading. A warm, palpable sense of self does not waft off the page to greet you, like a friend or familiar scent. These characters might seem underdeveloped, cold, aloof, not fully fleshed-out, unable to offer the reader a straightforward account of themselves. They might be described as unreliable, complex, neurotic, frustrating, unlikeable. They are often—but not exclusively—poor, neurodivergent, queer, women, people of color. They have often—but not necessarily—experienced trauma. Some might try to dissociate out of their own plotlines. Their incoherence is not the result of being poorly written, but because they exist in a troubled relation to what it means to feel real—to neatly gather a disarray of thoughts, sensations and experiences under the banner of an ‘I,’ with all the self-assurance that implies.

Why read—or indeed, write—characters like this? There’s good old identification, of course, and I would like to think that it does something to complicate empathy’s over-reliance on articulation. It’s easier to understand someone when they—like a ‘good’ main character—take you through their past and connect the dots to the present. But not everyone can give a full account of themselves.

And sometimes, the attempt to do so can lock the speaker into certain narrative positions, which others come to expect of them; the “I” calcifies around its particulars or experience of harm and precludes the possibility of existing otherwise. Not-so main characters hold a space for not having, or being able, to divulge the worst things that have happened to you in order to merit taking up space. During and after trying to write a narrator like this in my own novel, the following works of fiction, poetry and theory were indispensable to me. They provided a framework for conceiving of a first person that is always uncomfortably squirming out of its pronoun, both more and less than the undisclosed sum of its parts. 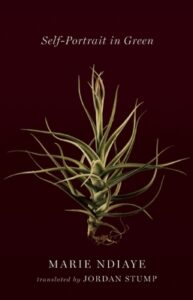 Marie NDiaye, Self Portrait in Green

This novel not only seems to change each time I return to it, but also to shape-shift during the act of reading. An adult woman with young children, the narrator is at once detached from and vividly connected to her surroundings, never more so when encountering one of the “women in green” that haunt her past, present and future. The women in green are a slippery, diffuse category—beautiful, glamorous, dangerous—which the narrator is both afraid of and bewitched by.

At one point her mother morphs into the archetypal woman in green: “untouchable, disappointing, infinitely mutable,” yet the narrator finds these figures more substantial than herself, and it is only her observations of them that give negative definition to her own interiority: “they decorate my thoughts, my invisible life.” Just as the narrator comes to understand that she needs the women in green in order to cohere and find life bearable, she reveals her own spectrality as a means of coping with loss. 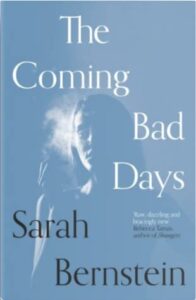 There’s something of a “woman in green” to Clara, a colleague who attracts the attention of The Coming Bad Days’ unnamed female narrator. Where Clara is enigmatic and self-assured, the narrator is indistinct, living on the margins of her own life. Her preoccupation with Clara creates a centripetal effect that confirms her own existence: “I felt that Clara was bringing the things I said into being, that my thoughts were being admitted to the sensible universe.” Like NDiaye, Bernstein brilliantly captures the tension between detachment and encounter, of a warped attachment to the world.

We know little of the narrator’s history except through a drip-feed of unsettling and disjointed anecdotes. At one point she receives an email from her father informing her of her estranged mother’s suicide, quickly followed by an automated message that the sender’s email address does not exist. This kind of thwarted lunge towards intimacy and connection is at the core of The Coming Bad Days. One of the things I value most about this book is its examination of gradations of detachment, as both anterior and subsequent to experiencing acts of violence. 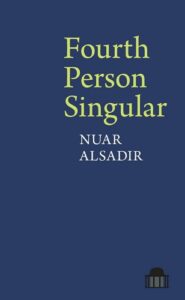 In writing the fragments that make up part of Fourth Person Singular, Nuar Alsadir—also a practicing psychoanalyst—alighted on a method to catch material that typically falls through the net of the conscious mind. She set an alarm for the early hours of the morning and wrote whatever came through the pen in her hand as she emerged from sleep. In this hypnogogic state, the “I” of the waking mind is still murky, blurred by the content of dreams. The result is a constellation of gem-like statements that seem at once elusive and a direct line to accessing some apparently-personal truth, otherwise obscured: “It has to be put away, the feeling—quick! / drop it into the small pocket, lock it up.”

Also including essays that orbit topics of shame and the lyric “I,” Fourth Person Singular revels in contradiction and multiplicity, in parts that don’t add up to a whole. It reminds me that a literary “I” can “resist adopting the fiction of a singular voice, have the intimate quality of a notebook without the intimate content, become the position or mouthpiece through which the world, rather than an individual, speaks.” 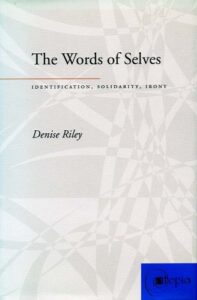 The second chapter of The Words of Selves begins with an authorial confession: “I’ve long been nursing a suspicion that there’s a particular guilt, associated both with writing and with taking on an identification, which is itself partly generated and fed by the workings of language.” This guilt is the “linguistic unease” generated by attempting to speak or write as oneself, which has as much (if not more) to do with language than it does with the person speaking. And why wouldn’t it, when the grammar we rely on for self-reference “seems to demand, indeed to guarantee, an authenticity closely tied to originality.” It’s a productively sticky state of affairs when the first-person pronoun designated to tell of our own uniqueness is also everyone else’s. As Riley succinctly puts it: “Anyone else is also I and although in calling myself I, I certainly mean me, this single person, what I say is still something completely universal.” 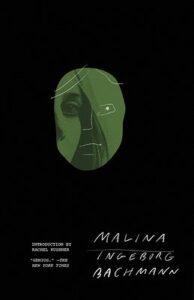 There was a moment in 2020 when everyone on my social media feeds (including me) seemed to be either reading Malina or watching the 1991 film adaptation, scripted by Elfriede Jelinek and starring Isabelle Huppert as the unnamed narrator. I get it: it was lockdown, and Malina largely consists of a woman unravelling in her apartment, making references to a mysterious virus which seems to encompass love, language, fascism, and patriarchy. This virus is akin to what Hélène Cixous called l’amour du loup, and perhaps sits next to Lauren Berlant’s cruel optimism—an attachment, sometimes fatal, to that which harms you. Infected with this virus, the narrator lives with one man—Malina—and is in love with another—Ivan—who lives nearby.

What starts out as an almost straightforward story of romantic obsession soon narratively and linguistically implodes, as the narrator comes to realize that, as Rachel Kushner’s introduction puts it, “she operates in a field of signs, an entire sensory reality, that is male.” Or, according to the still I screenshotted of the film (which, of course, was the one everyone else screenshotted too): “Language is punishment. All things are in it.” 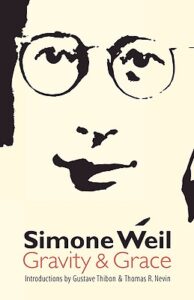 Gravity and Grace is a collection of journal entries by the French Catholic mystic and political activist Simone Weil, compiled after her death. The book is duly heterogenous, exploring topics such as evil, beauty and algebra, and several chapters concerned with the self and its undoing—or what Weil terms ‘decreation.’ Decreation consists of an admission that “We possess nothing in the world […] except the power to say ‘I’…’ and that our ‘I’ is ‘…what we have to give to God—in other words, to destroy.”

For Weil, the “I” is a coagulation of past and future, an arbitrary mask that we must learn to detach from in order to be filled with God. The writing is elliptical in tone, cohering to some internal logic not immediately graspable; yet Gravity and Grace is a book I habitually return to, less for theological instruction than its detachment of existence from ego, complicating the ease with which a self can tell its own story: “I am also other than what I imagine myself to be.” Because I’m a bad reader I also can’t help but read G&G alongside the strange particulars of Weil’s biography; it is endlessly compelling to me that a person who seemed so distinctive an individual should have been so concerned with the metaphysical and political task of self-undoing. 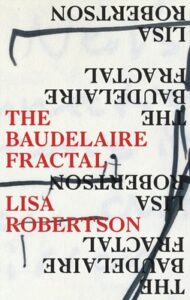 I wanted to conclude this list with a first-person narrator that takes pleasure in being non-identical with itself. Hazel Brown wakes up in a hotel room one morning only to discover that she has authored of the complete works of Charles Baudelaire. The Baudelaire Fractal is a sickeningly pleasurable and insightful jaunt through the self-unmooring and self-making of reading (and its co-morbidity, writing), which “unfolds like a game called ‘I.'” Here the strangeness of slipping in and out of one’s pronoun “is not a dislocation or a dissociation, but a freshening shimmer of sensual clarity.” Hazel abandons herself to this sensuousness, replete with scorn and erotic sadness, and in doing so discovers the flirtation, invention and possibility that inheres in an incoherent ‘I’. 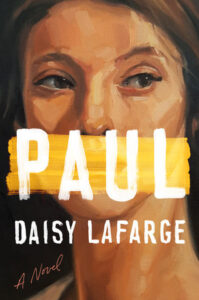 Paul by Daisy Lafarge is available from Riverhead Books, a division of Penguin Random House, LLC.

Daisy Lafarge was born in England and studied at the University of Edinburgh. Her poetry collection Life Without Air was short-listed for the T. S. Eliot Prize. Paul, the winner of a Betty Trask Award, is her debut novel. 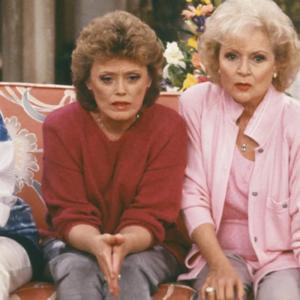 As an old woman myself, I find it easy to feel angry about the casual denigration of older women in the media, by social...
© LitHub
Back to top
Loading Comments...