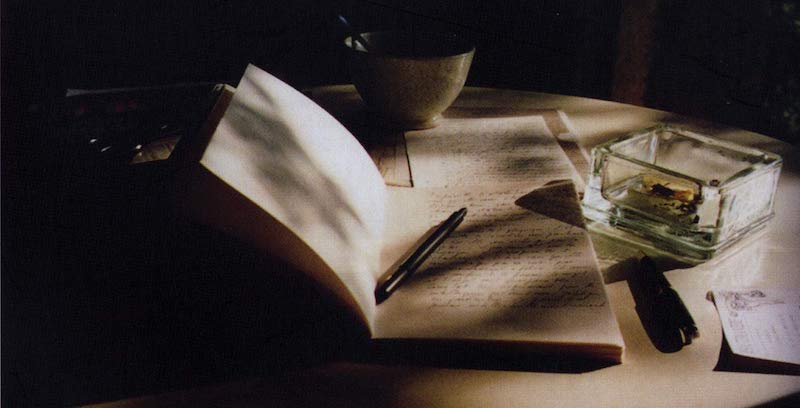 In my cultural consumption I have always had a tendency to empathize with losers. Long before I knew anything of romantic love myself I was identifying with downtrodden suckers who yearn helplessly and are doomed to languish in the shadows. It’s little wonder that my first serious romantic incident was entirely one-sided, and was no less formative and vivid for being so.

The object of my long lonely fixation was 16 to my 13, a gap which then felt as irreconcilable as a separating ocean. He was a sweet boy, gentle and kind even though it must have been mortifying for him to be followed around by an ungainly adolescent disfigured by visible adoration. He—of course—played guitar and his very cold blue eyes appeared always to be wincing in agony at the trials of existing in the world. That was a large part of what I loved him for, that he was in pain and uninterested in hiding it. What I imagined to be his poetic melancholy spoke to my own burgeoning teenage angst, made it seem interesting and meaningful and perhaps even beautiful.

I never imagined that he would return my feelings except in indulgent flights of fancy—once he left a thin soft navy wool cardigan lying around and before he could return for it I held it to my face and inhaled, saving up its scent to better bolster the fantasies. That I knew there could never be a resolution to my love, that it had no material momentum, meant I had all the time in the world to spend with it. I turned it over and examined it with great respect and exquisite sadness.

Unrequited love makes for such rich reading material because of this one-way street the sufferer inhabits. The lack of any external dynamism forces us to be extravagantly creative with our energies. We project whole personalities and tendencies and histories onto the other party. We live alone with the burden of devotion and it changes us. Although ostensibly our attention is directed exclusively in the direction of the beloved, our isolation compels us to draw heavily on inner resources and to excavate our most private selves. There can be a sort of quasi-religious benevolence about our worship—both of Jeffrey Eugenides’s first two novels give their unsatisfied lovers grace and goodness as part of their longing. They may be crushed by their need, but they are not spiritually lessened by it. The pedestals they build are shown to have some sort of beauty despite their lack of function. Then there are those whose disappointment sours into anger and ugliness and ruins the sufferer and those around them, like Miss Havisham in Great Expectations as she grooms Estella to be cold and incapable of receiving love, and Pip to give it to her in abundance.

It was primarily this second sort of darker unrequited love which I was interested in exploring when I went to write my own novel, Acts of Desperation. My narrator becomes hellbent on loving a man named Ciaran, a beautiful and defiantly cold, remote man who plainly shows that he will not return her affection. Her refusal to accept this and her eventual ability to at least nominally wear him down leads them to catastrophic mutual destruction. The feeling of living for another person, that sacrificial feeling, can fool you into thinking that it has inherent benevolence, but unmet obsession can spiral in all sorts of malevolent ways. I wanted to show what is really a kind of violence in the rejected lover—no matter how injured and sad—who insists on forcing their love upon someone who doesn’t want it. 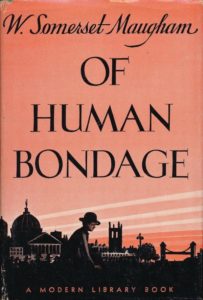 This masterpiece by Somerset Maugham is so painful and vivid on the kind of blind adoration which can’t be curbed by cruelty. The succession of indignities inflicted on hapless Philip Carey left me in tears when I read it as a teenager. We meet recently orphaned Philip when he is nine years old and follow him through difficult school years socially impeded by a clubfoot, to art school in Paris where a fellow artist Fanny falls in love with him and commits suicide when her feelings are not returned, and then to London where he studies medicine having abandoned his artistic ambitions. It is here he meets Mildred, a waitress in a tea room, and falls desperately in love. Her complete indifference and inability to regard him as a real human being make no difference. He continuously forgives her rudeness and outright savagery, giving her money just before she leaves him, taking her in when she has been rendered pathetic by misfortune with other men. Mildred has no apparent attractive redeeming qualities and doesn’t need them, obsession being untethered to logic. Although Philip eventually unshackles himself from Mildred, it isn’t before she has taken more or less anything she can from him, materially and emotionally. 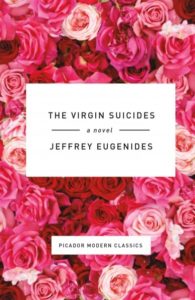 I read The Virgin Suicides when I was far too young, eleven, and it became a sort of holy text for me, stirring both romanticism of unrequited love and discomfort at not myself being the sort of girl who could inspire the slavish devotion which characterizes the book. A collective narration by a Greek chorus of neighborhood boys tells the story of the Lisbon girls, five sisters. After one of them, Cecelia, commits suicide, their parents withdraw the others from public life. The boys had been living in a state of passive worship for the Lisbon sisters for as long as they can remember, and deprivation of them only serves to sharpen it. The thought of those ripe teeming bodies cooped up in an airless home tainted by tragedy haunts them. The terrible culmination is recounted from the perspective of their now adult selves, still arrested in adolescence by awe and grief. The Virgin Suicides is likely the most important book of my life, sneaking in too early and wrenching parts of me which weren’t ready to be awake yet. 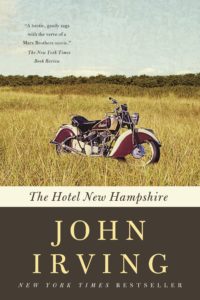 There are some scenes so incongruous that I wonder years later if I dreamed them, most notably the ending of Stephen King’s IT when seven children engage in group sex to defeat a demon. I have sometimes experienced this with The Hotel New Hampshire, a book I treasured dearly as a 15 year old and whose maxim “You’ve got to get obsessed and stay obsessed” inspired me to get a tattoo simply reading “OBSESSED.” Can it really be the case, I ask myself, that there is a scene in this beloved book of my childhood where a brother and sister have an exhaustive amount of sex with each other to expel themselves of their incestuous lust? Indeed it is, but somehow it feels much more plausible and moving than the bare facts account for. Franny loves John too but really it’s John’s lifelong dedication to his wounded sister that they are putting to bed when they do so. Like so much in John Irving’s work, you either buy in or you don’t and all these years later I still do, somehow. 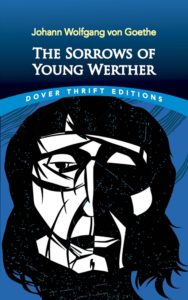 The general reception of Goethe’s debut seems to have shifted entirely as time has passed from audiences in 1774 perceiving Werther as a tragic and noble hero to contemporary readers who are more likely to see an affected bourgeois narcissist. Whatever your reading of the character, The Sorrows of Young Werther is perhaps the most iconic unrequited love story, wildly popular and influential although the longstanding legend that it inspired a notable spate of copycat suicides is apparently just that. Although I generally sympathize with W.H. Auden’s perspective on the character of Werther—he called him a “horrid little monster”—I admit I am not wholly unswayed by his preening but sincere earnestness, his absolute prioritizing of emotion above all else. There is always something moving to me about the ability of the young to take their own feelings entirely seriously. And, too, I find myself aligned with Werther’s prizing of raw feeling over intellectual dissection: “Anyone may know the things I know—my heart is mine alone.” 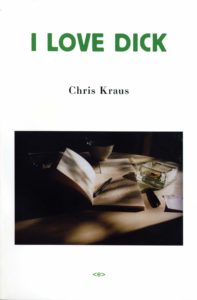 Alongside The Virgin Suicides, this raucous work of autofiction about Kraus’ rebutted desire for an artist and academic named Dick is probably the most directly influential on my own book. Kraus’ gleeful willingness to lay out her abject unruly lust was so much fun and so freeing for me to read when I came to it at 25. I was then just out of a series of chaotic relationships characterized by my own incontinent affection. It’s embarrassing to be the pursuer, the aggressor, the one who loves more, especially as a woman—it makes you desperate or a slut or crazy. I found it incredibly difficult to acknowledge it whenever it had been true of myself, but reading this made the illumination of those scary or ugly inclinations seem not only possible but potentially radical. 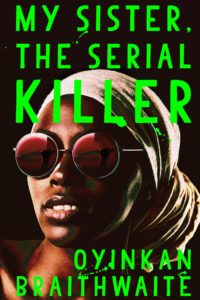 In this pleasingly ghastly, and very funny, sharp shock of a novel, Korede is a nurse, and the long suffering sister to willful, beguiling, beautiful influencer Ayoola who has also recently achieved serial killer status by doing away with the third of her boyfriends. Korede is called upon each time to help do away with the evidence and keeps an anguished eye on her sister’s giveaway glib behavior on social media, advertising her breezy recovery improperly soon after the deaths of her beaus. Their dynamic is disrupted when Ayoola sets her sights on a doctor at Korede’s hospital, Dr Tate Otumu, for whom Korede has been harboring a private passion. Will she finally stand up to Ayoola’s careless propensity for violence or sacrifice her benevolent doctor for familial duty? Her shy, reverent admiration is painful and touching, particularly one scene in which she wistfully watches him charm a crying toddler. And I love Braithwaite’s portrayal of the plain unfairness of unrequited love. Korede and Dr. Otumu have a genuine and long-established bond but it’s Ayoola’s physical beauty which finally makes the impact on him. Ayoola knows this—it’s part of why she can so ruthlessly make quick work of men: “All he wants is a pretty face. That’s all they ever want.” 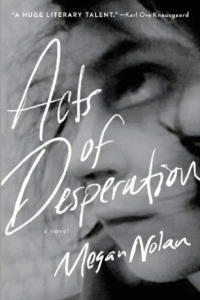 Acts of Desperation by Megan Nolan is available now via Little Brown and Company.

Megan Nolan lives in London and was born in 1990 in Waterford, Ireland. She has a robust and devoted following for her writing which includes essays, fiction and reviews published widely including in the New York Times, the White Review, the Sunday Times, the Village Voice, the Guardian, and in the literary anthology, Winter Papers. Regular columns of her cultural commentary appear in i newspaper, Huck Magazine and the New Statesman. Acts of Desperation is her first novel.

Modern Parents Could Learn a Lot From Hunter-Gatherer Families 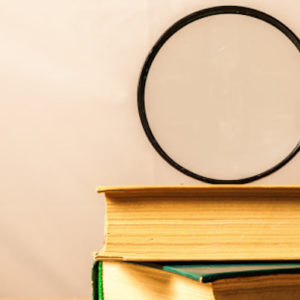 We live in interesting times. Global events out of our control delineate the new limits of our everyday life. Climate...
© LitHub
Back to top