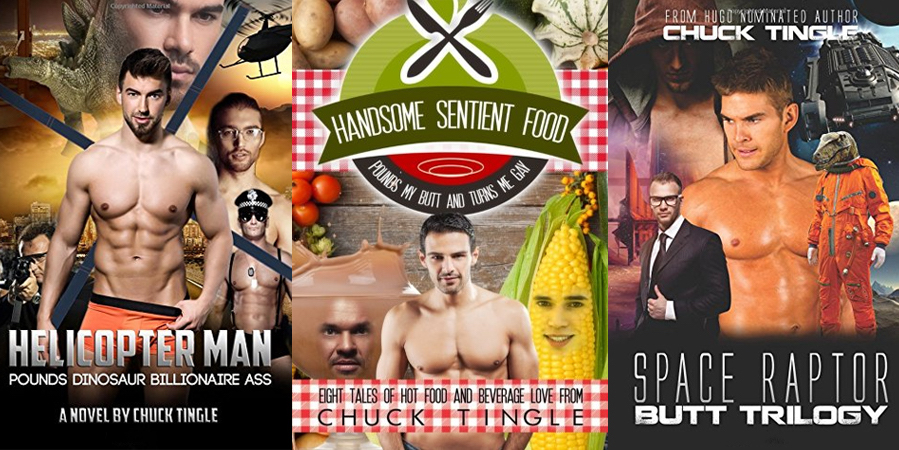 Yes, it’s Tingle Time. One of my all-time favorite literary personalities, the greatest self-published author to ever live, Chuck Tingle, has signed a two-novel deal with Tor’s Nightfire imprint. Per the Publishers Marketplace announcement, the first book, Camp Damascus, is about “a group of queer friends who begin to realize their memories of surviving a hellish gay conversion therapy camp have been stolen from them”; the second is called, Bury Your Gays.

As Tingle premises go, Camp Damascus sounds downright conventional. You may recall that Tingle famously trolled the reactionary, right-wing old-guard of sci-fi back in 2016, when he successfully outmaneuvered the so-called Sad Puppies in their attempt to sabotage the Hugo Awards. Here’s how M. Sophia Newman described Tingle at the time, for Lit Hub:

“Chuck Tingle” is the nom de plume of a Billings, Montana, writer who produces a unique brand of self-published e-books. His stories—he calls them “Tinglers”—are eccentric gay porn packed with bizarre references to dinosaurs, unicorns, and outer space, along with copious uses of the term “buckaroos.” They range from the abstract (Gay T-Rex Law Firm Executive Boner) to the politically up-to-the-minute (Slammed In The Butt By Domald Tromp’s Attempt To Avoid Accusations Of Plagiarism By Removing All Facts Or Concrete Plans From His Republican National Convention Speech) to the exceptionally high-concept (Pounded in the Butt by My Own Butt, which is not to be confused with its sequel and the third in the series).

I, for one, couldn’t be happier that the author of Handsome Sentient Food Pounds My Butt and Turns Me Gay is finally bringing home that bag.