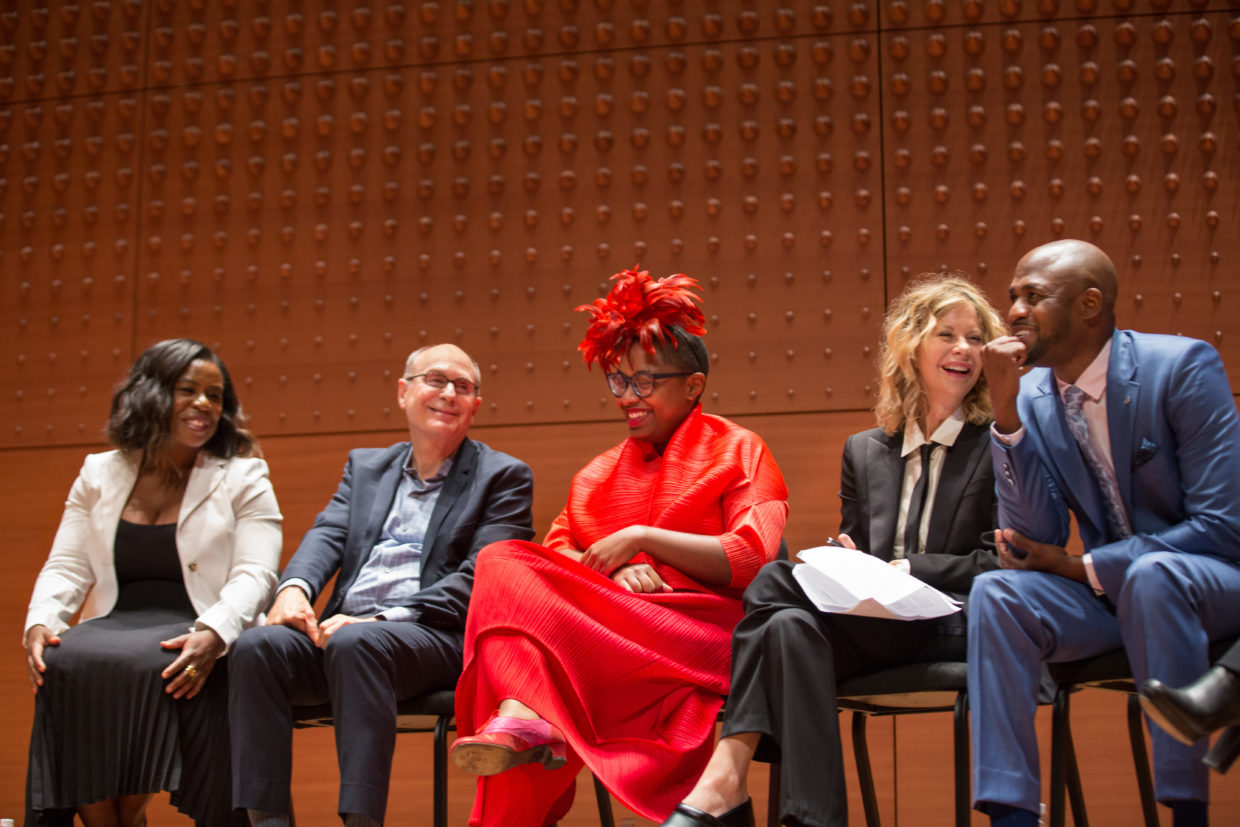 Ukuleles and Lullabies and Plenty of Poets at Lincoln Center

“Tonight, Hamilton is not the only sold-out poetry show.” This triumphant statement, spoken by Elizabeth Alexander, opened the Academy of American Poets’ 15th Annual Poetry and the Creative Mind event at Lincoln Center. The sweeping Alice Tully Hall was full, the lobby had been swarmed for almost an hour before, and tickets had sold out in about three minutes. The state of our world is precarious, and it’s hard not to feel uncertain or desperate; the poems chosen for the night seemed to speak precisely to that.

Joey Reisberg, National Student Poet, took the podium so jubilantly that the audience laughed with glee when he said hello. In a gilded floral blazer that shone all the way to the balcony, he read “Poem [Lana Turner has collapsed!],” which made everyone smile (as most Frank O’Hara does). He mentioned that he thinks everyone has a special family food that carries symbolic weight for them. “For me, that food is schmaltz. It’s a food of immigration, of resistance, of survival,” he explained as an introduction to his own poem about it: “Great-grandma did not let a patch of poultry go to waste.”

Before reading two Walt Whitman poems, Sebastian Junger ruminated on Whitman’s peculiar combination of deeply subversive and incredibly comforting—not unlike Bernie Sanders, he suggested. Amanda Palmer took the podium with two buns atop her head and a ukulele in her hands. She talked about how she got in trouble—“I get in trouble a lot”—for saying that Donald Trump was going to make punk rock great again. She expressed her hope that everyone will be inspired to make more punk rock and make more poetry and encouraged the audience to play an instrument—badly, if we must: “These are trying times!” Madhur Jaffrey came next, reading Grace Schulman and Deborah Landau. James Lapine read “Ode to the Unbroken World, Which is Coming” by Thomas Lux: “It’s the same everywhere: Slovenia, India / Pakistan, Suriname—people like to pray / or they don’t / or they like to fill a blue plastic pool / in the back yard with a hose.”

Maurice Hines bounced on the balls of his feet as he told a story about sitting next to Maya Angelou on the Amtrak while she wrote a poem, trying to capture a tap dance improvisation. “It’s called ‘Ain’t I Bad,’ isn’t that so, Maya?” His reading was exuberant; he stopped in the middle to exclaim, “Ooh, I love that part” and shimmied his arms. It was as much fun to watch as it must have been to read. Uzo Aduba opened with a story about the first poem she loved because she finally felt included in a narrative, and she read “Ego Tripping (there may be a reason why)” by Nikki Giovanni, sighing and holding out her hands, offering us the weight of her experience, letting us be cocooned in it.

Cécile McLorin Salvant came forward in an all-red outfit—not a demure, sultry red, but a crackling, loud, fresh-blood, fire-engine red, from her shoes to her hair. She stepped away from the mic and began singing Bessie Smith’s “You Ought to be Ashamed,” and with the opening notes, I think we all felt tugged to a higher plane. The audience murmured in appreciation—and I’m not sure they realized they were doing it. When Meg Ryan took the stage, she was still applauding, and shaking her head in awe, she said, “Okay, back to earth again.” She read us three poems about love, by Jonathan Wells, William Carlos Williams, and Claude McKay. When she returned to her seat, Meryl stroked her arm from two chairs away, and they clutched hands for a second. Wayne Brady talked about the importance of the NEA and how he grew up on PBS, and he read Terrence Hayes, who he said he “became a fan of backstage.” Hayes’s “Lighthead’s Guide to the Galaxy,” and its lush visuals got a lot of appreciative noise from the audience.

And finally: Meryl Streep, a waterfall of neutrals in drapey black pants and a flowy white top, took the stage. She said that she was thinking about what Uzo said about the first poem she ever loved; hers was the lullaby her mother used to sing to her. “It’s not on the program, but I think I have to sing it.” And she did.

After the song, she read Gary Snyder’s “Mother Earth: Her Whales,” and then, to cheer us up, “Good Bones” by Maggie Smith. “Life is short and I’ve shortened mine in a thousand delicious, ill-advised ways,” a mother begins, before saying she will keep it from her children:

I am trying
to sell them the world. Any decent realtor,
walking you through a real shithole, chirps on
about good bones: This place could be beautiful,
right? You could make this place beautiful.

Would it be too sentimental to say that a large room of poets, singing their childhood memories and pleas for resistance, reading poems that enriched and inspired and devastated them, felt like it had filled in the bones of Lincoln Center and New York and the world for just one evening? When Meryl Streep reads poetry to you, it’s hard to resist romance. 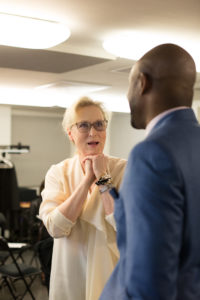 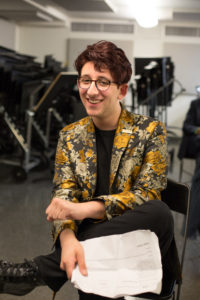 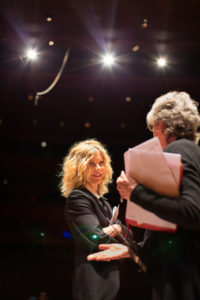 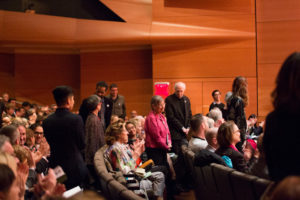 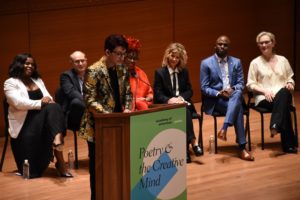 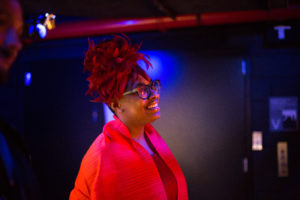 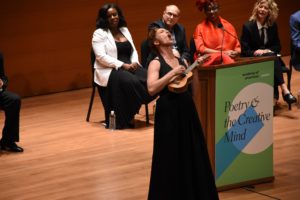 Amanda Palmer really wants us to play our ukuleles 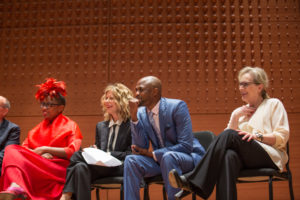 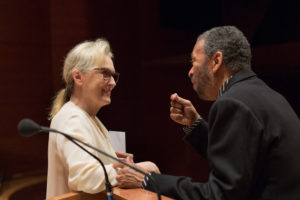 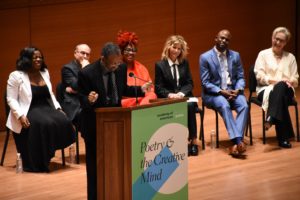 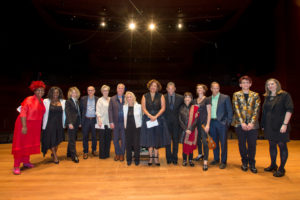 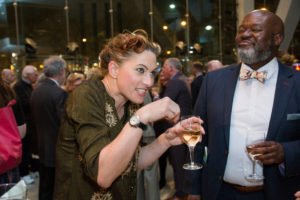 Amanda Palmer at the reception 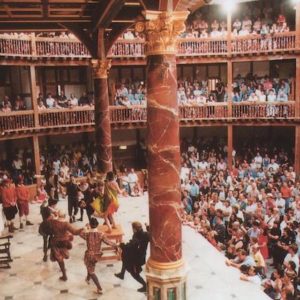 In 1949, a young American actor of some distinction, Sam Wanamaker, arrived in London. He was making a pre-emptive dash and quitting...
© LitHub
Back to top
Loading Comments...