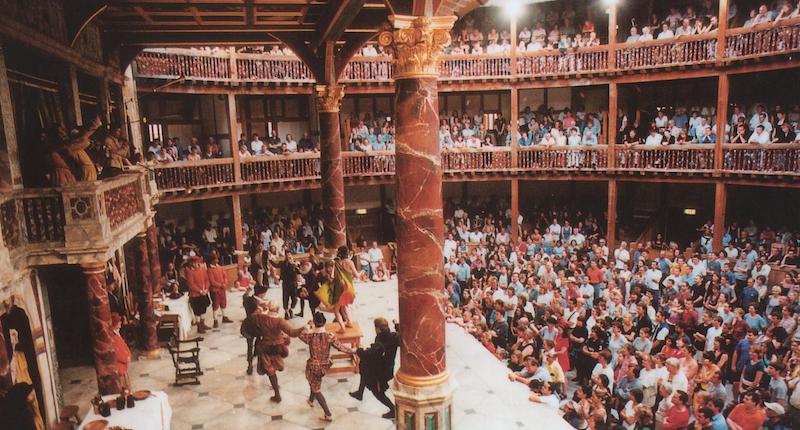 How Sam Wanamaker Carried the Globe on His Shoulders

In 1949, a young American actor of some distinction, Sam Wanamaker, arrived in London. He was making a pre-emptive dash and quitting the United States before the House of Un-American Activities Committee got to him and made his departure less voluntary, and more necessary. A Shakespeare nut from his early years, he had performed in and witnessed much of the Shakespeare Festival theater which appeared across America throughout the 1930s. Open-air performances in parks and public spaces, enhanced by partial attempts to replicate some of the architecture from Elizabethan theaters—a raised stage here, a fragment of frons scenae there, some benched seating elsewhere—these excited meetings of actors, ancient text and democratic audiences, were a small part of the optimism of New Deal America. But he wanted to see the whole thing, and arriving in London, he was eager to see how the best scholars and historians had memorialized this vital part of English history.

The last standing Globe Theater had shut its doors just over 300 years before in the 1640s, as the primacy of the Puritans in the Civil War brought all of that excessively cheerful theater-going to a firm end. It had been the most successful of the rash of theaters which mushroomed up around London from the 1570s on. Though each particular in its own way, they were polygonal wooden structures masquerading as embracing circles, their roofs open to the sky, their sheer walls enclosing a space for around two thousand to sit, and a thousand to stand, around a raised stage, a highly decorated frons scenae before them, and more electricity in their air per yard cubed than any theater space since the ancient Greeks carved chunks out of hills. As wooden structures they were built to perish, but Wanamaker expected some monument to capture the magic of their first existence.

The myth runs that he got straight off the plane, and asked the cabbie to take him to the Globe Theater. “Where?” the cabbie said. “Shakespeare’s Globe theatre!,” Wanamaker replied with a thrill. “Never heard of it.” After some discussion, they settled on Southwark, and Wanamaker found himself wandering around the bomb-sites of post-war Bankside, and the now disused warehouses that had served a once thriving dock-land, searching for any memento of the most successful and productive theater in history. There was nothing, until eventually he found a small nondescript plaque on a pub. In that small moment of defeat, surrounded by empty warehouses, strewn rubble and a whole city like a deflated lung, a determination was born. He found it simply inconceivable that London, and England, had done nothing to commemorate the place where so much of its great drama had been born.

Thus began a struggle which lasted 44 years. One American pitted himself against the massed sturdy inertia of an English establishment mired in its own poisonous desire to see nothing happen. There were the obvious obstacles—a monied class that thought philanthropy was an island in the Aegean where they’d holidayed once; a political class that thought the whole thing fanciful, far too much bother altogether, and a local political scene (led confusingly at times by Wanamaker’s own daughter) seemingly against any sort of progress of any kind. They apotheosized their obtuseness in asking the question, “What has Shakespeare ever done for Southwark?”

But there were other more surprising and more insidious barriers—intellectuals, stuck in a fundamentalist modernism, derided anything that smacked of the past as heritage theater; theater artists were fearful of the effort to recombine populism and what they thought high art; and theater critics and the directorocracy reacted with alarm to putting actor and audience freely and so nakedly into the same space together. All tried to block it in ways both public and private, bold and cowardly. The British desire not to do things, not to make things, can be very wearying. But Wanamaker, an extraordinary blend of charmer, irritant, huckster, dreamer and impresario plowed on. One of his oldest colleagues, Diana Devlin, once said, “Only Sam could have built the Globe, and only Sam would have taken 40 years to build it.”

Through bull-headedness, he managed to push past the crowd of nay-sayers. Through careful cultivation of those in the academic community willing to help, he convened a group that managed to work together to achieve a compelling vision for how the theater should be. Through shrewd property deals in an area that was slowly starting to emerge from its industrial obsolescence, Wanamaker gained a commercial foothold. Through remorseless noise-making he kept the profile of the project high. And through endless fundraising, much of it in the United States, he kept the project pushing forward. Yet he would never see it finished. With the foundations in place, and a few bays built, Wanamaker succumbed to a long illness. He went safe in the knowledge that his trusted friends would finish it, and probably aware with a tragic irony that the last push needed to complete it required his own death. Another great American, Melville, once said, without awareness of the ironies that might later attach, “For small erections may be finished by their first architects; grand ones, true ones, ever leave the copestone to posterity. God keep me from ever completing anything.” I think Wanamaker would appreciate the sentiment, and the irony. He himself has been amply memorialized since, not least by an indoor theater we built to match the outdoor playhouse, and named after him.

Another American, or part American, Mark Rylance, contributed almost as much to the Globe as Wanamaker himself. Its first Artistic Director, he taught the space how to understand itself, and led actors and audiences together in a dance which revealed how these astonishing works could be played with a light truth, and a heavy effect. The contentions of the original business plans for the Globe were that it would be a disaster, and that no one would or could want to stand for three hours to watch a play, or sit on such tough seating. But business plans were trumped by the sheer surprise of the place and its large dreaming. From the moment it opened, it was stuffed with people, an unbroken populism that has continued for over 20 years.

The American connection has continued to thrive through the time when I was Artistic Director and beyond. Broadway has welcomed our shows; films of our productions have played across the States; we have continued to be grateful for the generosity of American benefactors; we have toured regularly across America. Our tour of Hamlet, which played every country in the world over a two-year epic odyssey, alighted at various moments in many towns across the States, and even had a one-off showing at the United Nations in New York. Many Globe strands came together when on Shakespeare’s birthday last year, our world tour of Hamlet returned to the Globe, and we were graced by a visit from President Obama to help in welcoming it home.

The history of the relationship between Shakespeare and America is a long one. From the early battles between Forrest and MacCaulay to define what American theater should be through their interpretation of Shakespeare roles, battles which led to large-scale rioting and loss of life; through the Booth family’s ill-fated obsession with Julius Caesar; through the pioneer actors (and gender-bending actresses) who went out to the rooting-tooting West and soliloquized to the punctuation of hand-guns; through the long story of Shakespeare and film; in this and many other ways, the Americans have adopted the bard of Stratford and made him part of their own story.

We often noticed an excited gleam in the eye ignited by the mention of the Globe in America. The reaction is strong in New York, but gets stronger as you travel west. The very name of the theater seems to invoke an almost mystical authority, which we often found embarrassingly difficult to live up to. Part of it is a presumption of artistic authenticity—allying us to the Bolshoi in ballet or the Berlin Philharmonic in classical music—which we had to blushingly argue away. But more of it comes from an atavistic sense of connection. The mixture of pirates, land-grabbers, utopians, psychopaths, dreamers and people simply looking for a new chance, who sailed to Virginia, and elsewhere on the east coast, to forge their complicated way in America, came from an England that was in thrall to the stories and the language of Shakespeare, and the crossed wires from which he fought his way free. Something of the sensibility that pulsed from that wooden box of stories, the Globe, traveled with them. It helped inform the mentality of those who arrived. Any form of contact, however ersatz or prosaic, is in some way a form of contact with that original pulse. Just as Aeneas’s journey from Troy to Rome is a symbol to express the carriage of one part of a dying civilization’s DNA to help form the creation of another new and dynamic one—so with Shakespeare and America. However obscurely, it forms part of the founding myth.

We were always delighted to be even just an echo of that moment.

Dominic Dromgoole was artistic director of Shakespeare's Globe Theatre in London from 2005 to 2016. He is the author of Hamlet Globe to Globe, Will & Me: How Shakespeare Took Over My Life, and The Full Room: An A-Z of Contemporary Playwriting. He is a regular contributor to the Guardian, New Statesman, and Sunday Times (UK).

Ukuleles and Lullabies and Plenty of Poets at Lincoln Center 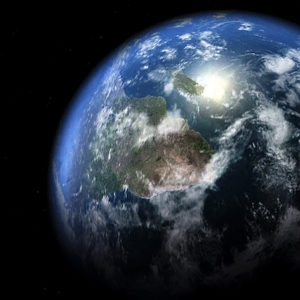 Squid Eggs and Global Warming The following is adapted from Nicole Walker's Egg, now available from Bloomsbury's Object...
© LitHub
Back to top