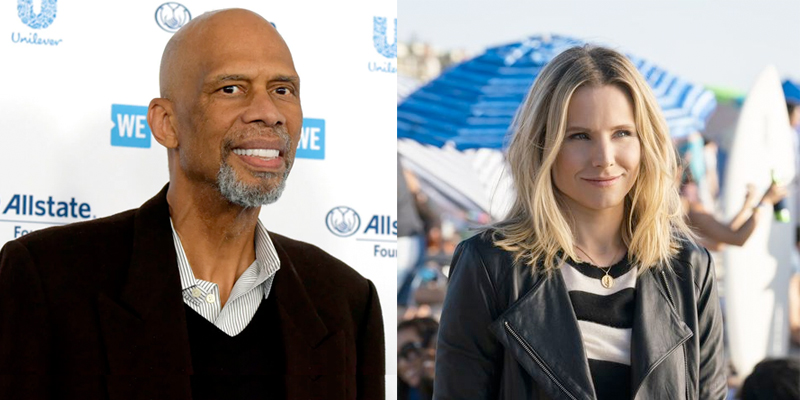 Turns out, Kareem Abdul-Jabbar wrote an episode of Veronica Mars.

Good morning! I have amazing news. It turns out that author, actor, esteemed Sherlockian, NBA-all-time-leading scorer, NAACP Image Award-nominee, Presidential Medal of Freedom-recipient, and all-around Renaissance man Kareem Abdul-Jabbar wrote an episode of Veronica Mars. From the new season! It is going to be a wonderful day, folks.

This fact was recently shared on Twitter by writer and Bitch Media co-founder Andi Zeisler, who tweeted in jubilant stupefaction, “Kareem Abdul-Jabbar was a writer on the Veronica Mars reboot and none of you monsters told me?!? What is Twitter even FOR.” Yes, indeed! We agree with this sentiment wholeheartedly and looked up everything we could find about this wonderful occurrence. (Thank you Andi, for demanding that this receive the attention it deserves!)

Abdul-Jabbar, who has written and co-written seventeen books, including four in his bestselling Mycroft Holmes series, also served as a producer of the rebooted fourth season of Veronica Mars, which premiered in the summer of 2019. He co-wrote one episode, with his frequent collaborator Raymond Obstfeld: episode six (no, it’s not the finale), which is entitled “Entering a World of Pain.” That episode features some snappy lines and crisp tension, including a fun lil’ Mary Poppins reference (“You need a spoonful of sugar to help that medicine go down?” Veronica asks Eli Navarro, in true wry fashion.) Good stuff!

Evidently, this collaboration came about when Abdul-Jabbar wrote an article about some of his favorite YA-novels, and he included the novel Slave Day by Rob Thomas, the showrunner of Veronica Mars. Evidently, in the article, Abdul-Jabbar mentioned being a fan of the original Veronica Mars and Thomas’s new series iZombie. Thomas was delighted (wouldn’t you be?) and asked Abdul-Jabbar if he would write the introduction to a new edition of the novel, and Abdul-Jabbar accepted, jocularly agreeing to do it if he could play a zombie on iZombie, which he did. He had a one-episode guest-spot as an undead local politician named Zed. (This story just gets better and better.)

Thomas and Abdul-Jabbar continued to chat about projects, because Abdul-Jabbar and Obstfeld had begun developing “a noirish series…” about “a black troubleshooter for L.A.’s Dunbar Hotel, once the most elegant and prominent black hotel in America” and were interested in trying to develop it into a series. “Set in 1944,” Abdul-Jabbar added in an essay he wrote for The Hollywood Reporter, “the script features gangsters, spies, civil rights and jazz.” Thomas agreed to look at it, and shortly thereafter offered Abdul-Jabbar and Obstfeld jobs in the writer’s room of Veronica Mars‘s new season. Thomas told TVLine, “At a certain point, I said, ‘Well, you know if you do want to work in television, it would be great for you to get a little bit of experience. You’re both Veronica Mars fans. Do you want to come on the staff and see how a television show works?’ And so they did.”

“To give you some context,” Abdul-Jabbar wrote in his THR essay, “neither Raymond nor I were looking for more work. We have a full schedule of projects, so if we had been offered to write on a series we weren’t passionate about, we would have said no. But the original Veronica Mars is one of my favorites. It expanded the boundaries of both the mystery genre and the high school drama genre by combining them in such a clever, witty and intelligent way that the whole exceeded the sum of its parts.” (Hear, hear!)

Although Abdul-Jabbar has appeared on countless television shows and films, and had written two iterations of the documentary On the Shoulders of Giants, about the forgotten all-Black basketball team, the Harlem Rens, he had not written an episode of television before. Incredibly, given his countless accomplishments, he admitted to being nervous while in the writer’s room: “I’ve had the pressure of playing for NBA championships in front of millions of people, but that paled when watching the pressure he faced every day of the five months I was there,” he said. But the episode that they produced was impressive. “They handed in a terrific script,” Thomas noted.

And there you have it: the story of one of the most delightful collaborations possibly in television history. Until we meet again, Marshmallows.