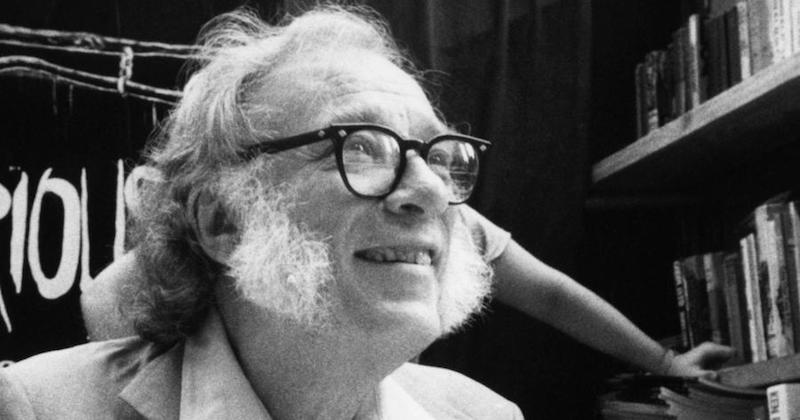 Turns out Isaac Asimov, father of robotics, was also the father of 100 “lecherous limericks.”

What do we talk about when we talk about limericks? When we consider the limerick, we might think of our elementary school poetry unit, or Edward Lear, who popularized the form in the 19th century with A Book of Nonsense, or the ever-popular man from Nantucket. But someone we don’t think of, whose limericking has been erased from the popular imagination, is Isaac Asimov. Yes, much-lauded science fiction author Isaac Asimov, author of the Foundation trilogy, who published Lecherous Limericks, a book of one hundred . . . lecherous limericks.

Asimov’s love for limericks started with the first (sigh) lecherous limerick in the volume, which reads thus:

There was a sweet girl of Decatur
Who went to sea on a freighter.
She was screwed by the master
—an utter disaster—
But the crew all made up for it later.

Yuk yuk. (Or, depending on your tolerance for this kind of thing: yuck.) Wrote Asimov in the limerick’s introduction—yes, each limerick in the collection has its own introduction—“This one marked the beginning. I composed it on the Queen Elizabeth II when returning from a visit to Great Britain in June 1974. When I recited it, everyone laughed. Since that time I have been writing down limericks. I wasn’t going to let myself forget them and lose laughs.” Let this be a reminder: your laughs have consequences.

Though they’re all obscene, some of Asimov’s lecherous limericks are better than others. The collection is pockmarked with duds like this:

There was a young woman named Rhoda
As sweet as a chocolate soda.
It was such a delight
To screw her at night
Then once more at dawn as a coda.

Where’s the joke? Is this a play on some sort of obscure trope that chocolate soda is meant to be drunk both at night and at dawn? (Frantically Googling “OVALTINE SCHEDULE NORMS” yielded no results.) And couldn’t Asimov have edited his limericks to both scan properly and be less “screw”-reliant? Here’s another representative sample from Lecherous Limericks, which is similarly jokeless:

Said an ovum one night to a sperm,
“You’re a very attractive young germ.
Come join me, my sweet,
Let our nuclei meet
And in nine months we’ll both come to term.”

Considering Lecherous Limericks, I have so many questions. Asimov didn’t want to “lose laughs” by forgetting his limericks; was Asimov just whipping out his limericks to delighted audiences as social events? These books aren’t mentioned in overviews of Asimov’s career; did their publication affect his reputation at all, or did all his peers find them funny? And, how (and why) was he able to produce such a staggering volume of obscene limericks? On the back of A Grossery of Limericks, Asimov answered this last question:

It’s difficult to find an answer that doesn’t sound immodest since “Sheer genius!” happens to be the truth.

In a way, his commitment to the bit is impressive, and rare. People just aren’t doing lechery like they used to. Or, rather, they’re still doing it, but with less whimsy.