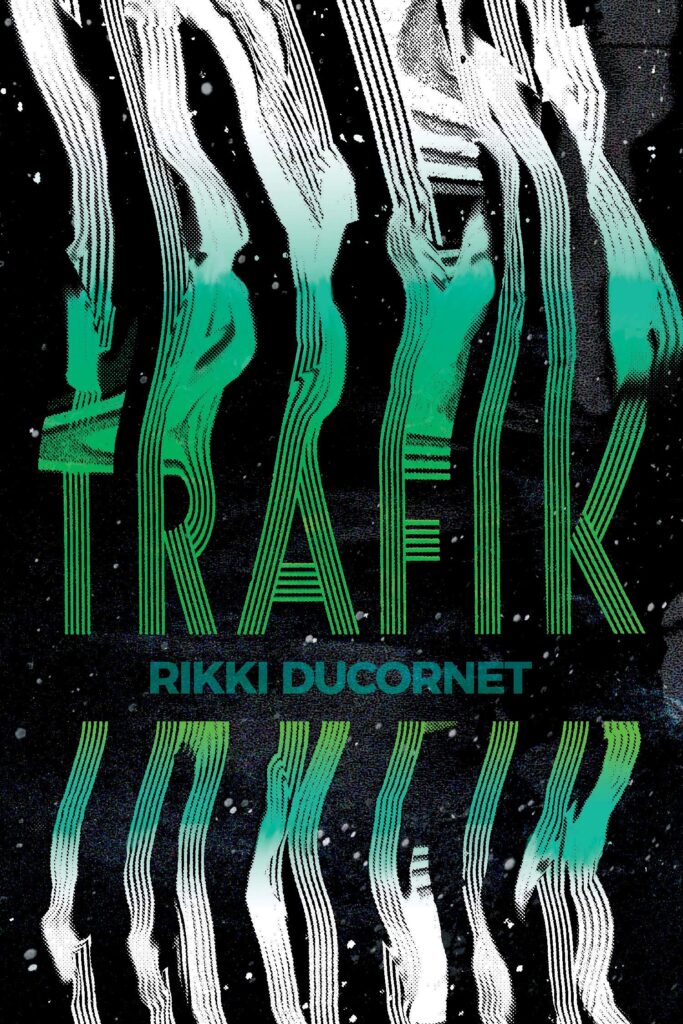 The following is excerpted from Rikki Ducornet's latest novel, Trafik, about a voyage through outer space and inner longing. Ducornet is a transdisciplinary artist, and her work is animated by an interest in nature, Eros, tyranny and the transcendent capacities of the creative imagination. She is a poet, fiction writer, essayist, and artist, and her fiction has been translated into fifteen languages. She has received numerous fellowships and awards, including the Lannan Literary Award for Fiction.

Sometimes Quiver feels so outside of everything, so peculiar, she catches herself scratching and poking her face in the manner of a caged monkey on the verge of insanity. She is doing this now, having left the Lights and making her way back to Home Free and Mic. As soon as he sees her, Mic offers her a slice of warm chocolate cake. Stove has baked it, but the icing is a molecular shuffle of his own inspiration. It has the tonguefeel (his word) of chocolate mousse—something she has never tasted.

Mic, having recently been introduced to the Kyoto App, is dressed like a geisha. Both of his lenticulars are punctuated with a dot. These, he explains, serve as a geisha’s eyebrows. Gratefully, Quiver eats the cake and then slips off to shower and nap. Shower massages her in all the right places, but this is a shallow comfort. Once an avatar from another galaxy had—by no fault of its own—entered the shower at the very moment she had climaxed. Quiver’s muted cries were enough to send it packing. To her dismay, there was no way she could coax it back. Such encounters happened all too rarely, and this avatar was unusually charming. It reminded her of Julio Cortázar, who, before he died, had the face of a lion. Cortázar, who wrote: The red headed night should see us walking with our face to the breeze. Just what, she wonders, is a breeze?

Always at the start of First Cycle and before getting down to things, Quiver runs in the woods with the Lights. This time, as she had specified, there is an owl in each tree. Owls and a brook full of fish—similar to those she had encountered on the walls of tombs when, as a child, she visited the Nile River Valley within the Lights.

This cycle, and for the first time, she glimpses a girl with dazzling red hair who, as she runs past, gazes into her eyes with a crazy and unforeseen intensity. It occurs to Quiver that the girl is associated with the owls, that if she asks for owls each time, she will likely see her again. And she does. The following First Cycle, the girl streaks past directly in the path, her hair ablaze in the interstices of the leaves, her sudden face as vivid as a comet. Quiver thinks that if they were together, the moments would always quicken like this. Later she tells Mic about the owls and the fish, but for now keeps the redhead to herself. Overhead the Plonk Sidereal Atlas sparks with stars. They are approaching the Small Magellanic Cloud.

For Mic, the Lights are all about cities. City streets, the souks brimming with things of hammered copper and brass in stacks. Boxes of tools, ruined ceiling fans, wire, wrenches, screwdrivers, and brass tacks. Manhattan. Its orange and yellow taxis. Their bright bumpers. Elevators. Hollywood. Above all: Hollywood. When Quiver sleeps, he roams the Chateau Marmont. Lounges poolside. Becomes intimate with coffee makers, the showerheads, and majestic freezers. Mic adores the Chateau Marmont. And Al Pacino. His sprawling pad, its many faucets. Pacino’s faucets! His blender, his juicer!

It was in space, alone with Mic, that Quiver came to fully appreciate her vanished lover, who, if vitalized and enhanced, was, as was she, nonetheless categorized as terrestrial. Her lover was the one who stood out among all the others—those who were memorable, who had taken form within a mother’s womb. She thinks of her lover’s immaculate feet, naked as fish, the fish she had seen in the Lights. Back in Home Free with Mic once again, she is longing for her lover and for her own self concurrently, the self she was in her lover’s proximity, her embrace.

Quiver is a transitional prototype. She had gestated in a dynamic carbon envelope that, suspended from a rack, swelled as she swelled, her umbilical cord fused to a vitamin sack. Row after row, the envelopes and the sacks hung in the air. It was said that they were festive—music for the eyes. She hates to think of it.

Transitionals such as Quiver were fraught, an irritable bunch at best. Which is why she travels with Mic. Mic is good in emergencies, as when she flips her fuses (his words). Always on the lookout, and at the end of Second Cycle, he downloads her dreams. Although rooted in simulations and threadbare memories, Quiver’s dreams are authentically hers. Mic keeps a careful record, and in this way knows when she is close to flipping. Mic, too, is volatile. And when he comes apart at the seams (her words), Quiver weighs in. It is in this way that they are considered right for one another.

To be clear, it must be said that both are most capable. Both had been trained for rare mineral reconnaissance and extraction, and to interact graciously in limited environments.

Mic has something of an old-world sensibility—likely due to his passion for terrestrial cinema, popular music, and, most recently, all things Japanese—a sensibility that Quiver finds precious. This Mic had picked up at once, yet what can he do? His Swift Wheel is packed with music and movies! These are what keep Mic motivated and happy. But in her worst moments, Quiver fears he had been hardwired to aggravate her. She fears they had been teamed up so that he could observe and document her descent into madness—always a possibility for even the most muscled prototypes.

Mic is well aware of her sensitivities and at his best understands and respects her ongoing need to turn to the Lights for solace. Her need to run in the woods, on the mountain trails and country roads of vanished places. He, too, is wired to so much that is (or had been) terrestrial. In this way they share a profound (and most likely essential) experience of the original planet.

Mic is short for Michelangelo (and not microphone—although a thumbnail-sized microphone is emblazoned on his minus end). When he stands at attention, his Swift Wheel humming, the display fume suspended before him, he percolates his way into whatever is going on. As when he wanders the souk of Aleppo, circa 1953, a discreet stowaway on a clueless couple’s honeymoon. Or transits to Vienna that same year. (He likes the fifties, the pressure cookers, toasters, Waring Blenders, Studebakers—that sexy front end!) He searches a wealth of material on Studebakers and succumbs to an ongoing and helpless crush, unable to speak of anything else until Quiver threatens him with a vinegar bath—vinegar one of Mic’s vulnerabilities ever since he had come close to perishing on a previous mission during a freak encounter with oscillating plasma clouds gorged with vinegar. They had returned to Elsewhere at once where he was polished within an inch of his life. When it was over, Quiver touched what stood for his shoulder with something like tenderness. His voice breaking, Mic had thanked her for what he called comforting me in a human way. Sometime later he had reached out to her similarly, patting her shoulder with that adaptable hand of his, eight fingers that could in a quik become a claw, a hammer, a rake, a set of tweezers, a bottle opener. The gesture was unforeseen. Quiver had shuddered so violently that Mic, looking into her eyes with those ever-shifting lenticulars of his—now green, now orange, now red—shed what was apparently a tear. Later she saw the tear gleaming on the floor beneath Food Face. Picking it up, she was surprised to see a small marble of cat’s-eye Jasper—the very thing the children of the Home Planet had prized in their games of bum-hole. Mic’s tear was the first and only marble Quiver would ever see. She kept it for a “rainy day”: a thing she knew but virtually, she kept it for “luck.”

The Kyoto App provides musical entertainment. Mic excels at clappers, gongs, flute, and drum; strings. As she nibbles her Newton Bar and sips her gigahertz mixer, he offers up a haunting melody. It conjures everything the Lights have taught her about the terrestrial night, tree frogs, and spring weather. As the music recedes, Mic recites from the Makura no Soshi:

It is night. Expecting a visitor, one is
startled by the sounds of rain striking
the shutters.

Thrust into agitation, Quiver sighs, sobs, shouts out, and—loses it. When she comes to, she is strapped into her hamok and must wheedle and cajole before Micosan agrees to her unbuckling. After, to make peace, he offers her a Francis Crick and a fragrant tea served in a replica raku tea bowl. The tea is soothing, and the Crick her favorite cracker. As she snacks, Mic screens her dream:

She is swimming in the ocean of an unknown planet’s atmosphere. She is a fish, a small orange carp, swimming among other fish—all mirrors of herself. Looking closely, she sees they are each fused in ice or, perhaps, glass. She, too, is immobilized within the glass, possibly immortal, in any case unreachable. Now she is somehow herself, Quiver, running down a garden path toward a charming building in a sea of sound: tree frogs, crickets, birds. Something unprecedented is about to happen.

The screen idle now, Quiver looks away and sees that Mic—in red pants and a red jacket with gold epaulettes—has taken on the colors and demeanor from another time entirely. A red pillbox hat is poised on what serves as his head, and his flashing lenticulars convey pleasure in what is clearly the outcome of a carefully considered determination. He proposes a deal. If she says nothing about this, he will not inform Elsewhere about her recurrent breakdowns.

“For some time now,” he tells her, “Base sees nothing but a scramble of statik.”

“A bellhop! A bell would ring and he, looking divine, would hop to it! Just like a bot!” He executes a series of near somersaults in place, filling Home Free with the sounds of bells of all kinds, sounds she had never before heard: kitchen oven timers, egg timers, alarm clocks, dinner bells, cowbells, church chimes, horse-and-buggy bells, elephant and goat bells, cat bells—until she shouts “LAY OFF MIC!”—only to be outdone by the Plonk Sidereal Atlas, its voice rising above hers, if somewhat incoherently announcing that they are closing in on Quasi. Closeting Quasi! it rumbles: Closeting!

In this way, on they go together, Micosan and Quiver, deeper into the incomprehending night, deftly avoiding a sudden sea of leaking protons and always into the ineffable future.

Shannon McLeod on Letting Go of Saving the Cat 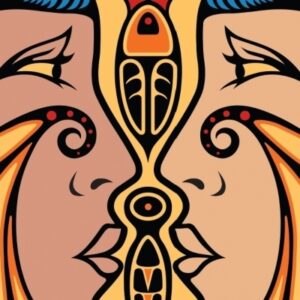 The Firekeeper's Daughter by Angeline Boulley, Read by Isabella Star LaBlanc Every Monday through Friday, AudioFile’s editors recommend the best in audiobook listening. We keep our daily episodes...
© LitHub
Back to top