Mark Lilla Proposes a Way for Democrats to Move Forward

It is a bittersweet truth that there has never been a better opportunity in half a century for American liberals to start winning the country back. Republicans since Donald Trump’s election are in disarray and intellectually bankrupt. Most Americans now recognize that Reagan’s “shining city upon a hill” has turned into rust belt towns with long-shuttered shops, abandoned factories invaded by local grasses, cities where the water is undrinkable and guns are everywhere, and homes across the country where families are scraping by with part-time minimum-wage jobs and no health insurance. It is an America where Democrats, independents, and many Republican voters feel themselves abandoned by their country.

So what has been preventing liberals from seizing this opportunity? A word: We.  Liberals’ hyper-sensitivity about identity has gotten them in the habit of seeing and talking about the country as an agglomeration of groups. They tend to put the word we into quotation marks, as if to say that of course there is no such thing. Yet there is no long-term future for liberalism without this word.

Historically liberals have called on us to ensure equal rights, they want us to feel a sense of solidarity with the unfortunate and help them. We is where everything begins. Barack Obama understood this, which is why he so often said Yes, we can and That’s not who we are. (Though, characteristically, he never got around to saying who exactly we are or who we might become.) But by abandoning the word, identity liberals have landed themselves in a strategic contradiction. When speaking about the groups to which they belong, they want to assert their difference and react testily to any hint that their particular experience or needs are being erased. But when they call for political action to assist their group X, they demand it from people they have defined as not-X and whose experiences cannot, they say, be compared with their own.

But if that is the case, why would these others respond? Why should not-Xers give a damn about Xers, unless they believed they share something with them? Why should we expect them to feel anything at all?

The only way out of this conundrum is to appeal to something that as Americans we all share but which has nothing to do with our identities, without denying the existence and importance of the latter. And there is something, if only liberals would again begin to speak of it: citizenship.

Admittedly, the word citizen has a musty air and conjures up images, for people of a certain age, of schoolteachers tapping blackboards with wooden pointers during civics class. But it has great democratic—and Democratic—potential, especially today. That is because citizenship is a political status, nothing less and nothing more. To say that we are all citizens is not to say that we are all alike in every respect. It is a social fact that many Americans today think of themselves in terms of identity groups, but there is no reason why they cannot simultaneously think of themselves as political citizens like everyone else. Both ideas can be—indeed, are—true. What’s crucial at this juncture in our history is to concentrate on this shared political status, not on our other manifest differences. Citizenship is a crucial weapon in the battle against Reaganite dogma because it brings home the fact that we are part of a legitimate common enterprise that We, the people have freely willed into being. That we are not elementary particles.

Another reason to think and speak in terms of political citizenship is that the status is extendable and its meaning expandable. The American right uses the term citizenship today as tool of exclusion, but liberals have traditionally seen it as a generous tool for inclusion. The modern concept of citizenship originally meant that you were neither a slave nor a subject under the authority of a monarch or a pope. It was a formal designation and was restricted to a small class of people. In the 19th century, in Europe and the United States, the question became who deserved to be citizens, and eventually the formal franchise was extended to those without property, women, former slaves, and so on. In the 20th century the question centered on what was materially necessary to enjoy the benefits of democratic citizenship equally, which provided a way of making the case for the modern welfare state. All liberal arguments to improve that state can still be formulated in terms of citizen enfranchisement.

And the concept of citizenship has one additional advantage. It provides a political language for speaking about a solidarity that transcends identity attachments. Democratic citizenship implies reciprocal rights and duties. We have duties because we have rights; we enjoy rights because we do our duty. Yet the more individualistic our society has become and the more assertive Americans have become about their rights, the more narrowly political discussion and legal discourse have revolved around the self. In the Second World War era the connection between rights and duties didn’t have to be elaborated; the fight against fascism made it obvious. It was still obvious to the young men and women who served in Korea and even to those who volunteered in the early years of the Vietnam War. But the debacle of Vietnam made the notion of duty laughable to those who opposed it, and soon to much of the country.

The political creeds of our time make it virtually impossible to discuss duty. If you don’t need the goddamn government for anything, why should you do anything for your country? It was striking during the Reagan years that for all his talk about America as the last line of defense against tyranny, not once in his presidency did he ask the public to make any sacrifices to defend freedom at home or abroad. He understood the libertarian mood of the country too well. We now find it much easier to expand the deficit and rely on an all-volunteer force, then to give soldiers priority boarding on planes and thank them for their service. But why even do that? They got paid.

Progressives understand the need for solidarity in a way identity liberals do not—which is one reason among many why it may be up to progressives to save contemporary liberalism from itself. But progressives don’t speak of duty either. They remain prisoners of their own fixation on class and their nostalgia for America’s industrial union past. Progressives are completely right to argue that class matters as much now as it did in the first Gilded Age. But class consciousness has far less effect on the human mind—and certainly on the American mind—than those of a Marxist bent like to think. And if a sense of solidarity is based solely on economic resentment, it will be shared only by those who feel disadvantaged, and will disappear as soon as their fortunes improve in an economic upturn. Progressive political rhetoric does nothing to convince the well-off that they have a permanent duty to the worse-off. The Bible used to, but no longer. Though this is still a churchgoing nation, the gospel now being preached, particularly in evangelical circles, has been infected with the same individualism, selfishness, and superficiality that have infected other sectors of American life. Many believers still tithe to their churches but they reject outright the notion that taxes, too, are a kind of democratic tithe that goes to help fellow citizens like themselves. Charity, like tipping, is now left to the customer’s discretion.

In the absence of a motivating charitable faith, the only way one can hope to induce a sense of duty is by establishing some sort of identification between the privileged and the disadvantaged. Citizenship is not an identity in the way we currently use the term, but it provides one possible way of encouraging people to identify with one another. Or at least it provides a way to talk about what they already share. There is good reason why progressives should stop framing their calls for economic justice in terms of class and start appealing instead to our shared citizenship. 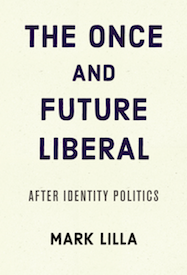 From The Once and Future Liberal, by Mark Lilla. Courtesy Harper, copyright Mark Lilla, 2017.

Mark Lilla is Professor of the Humanities at Columbia University and a prizewinning essayist for the New York Review of Books and other publications worldwide. His books include The Shipwrecked Mind: On Political Reaction; The Stillborn God: Religion, Politics, and the Modern West; and The Reckless Mind: Intellectuals in Politics. He lives in Brooklyn, New York. 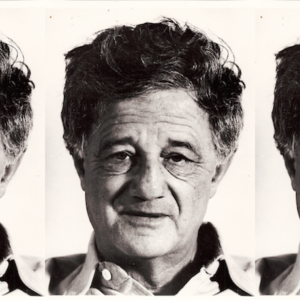 Rebecca Schuman: I made a mistake in my book and men on the internet went nuts. | Literary Hub Mark Bray on why we should...
© LitHub
Back to top
Loading Comments...