To Walk Alone in the Crowd 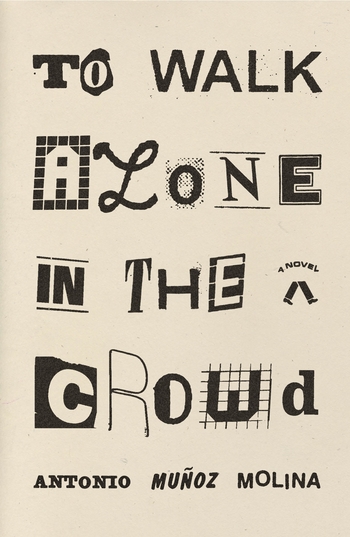 The following is excerpted from To Walk Alone in the Crowd, by Antonio Muñoz Molina, and newly translated from the Spanish by Guillermo Bleichmar. To Walk Alone in the Crowd is a a flâneur-novel tracing the path of a nameless wanderer as he walks the length of Manhattan, and his mind. Molina is the award-winning author of more than a dozen novels, including In the Night of Time, Sepharad, and Like a Fading Shadow. Bleichmar is a translator and professor at St. John's College.

Listen to the sounds of life. I am all ears. I listen with my eyes. I hear what I see on advertisements, headlines, posters, signs. I move through a city of voices and words. Voices that set the air in motion and pass through my inner ear to reach the brain transformed into electrical pulses; words that I hear in passing, perhaps if someone stands beside me talking on their phone, or that I read no matter where I turn, on every surface, every screen. Printed words reach me like spoken sounds, like the notes on a musical score; sometimes it is hard to unscramble words that are spoken simultaneously, or to infer those I can’t quite hear because they’re whisked away or lost in a louder noise. The varied shapes of letters give rise to a ceaseless visual polyphony. I am a tape recorder, switched on and hidden away inside the futuristic phone of a 1960s spy, the iPhone in my pocket. I am the camera that Christopher Isherwood wanted to be in Berlin, a gaze that must not be distracted by even the merest blink. The woods have ears, reads the title of a drawing by Bosch. The fields have eyes. Inside a dark, hollow tree glow the yellow eyes of an owl. A pair of large ears dangle from a burly tree as from an elephant, nearly grazing the ground. One of Carmen Calvo’s sculptures is an old wooden door studded with glass eyes. The doors have eyes. The walls have ears. Electrical outlets can hear what we say, according to Ramón Gómez de la Serna.

Perfection may be closer than you think. I go out as soon as it gets dark. It’s the late dusk of the first night of summer. I hear the rustle of trees and ivy from neighborhood gardens. I hear the voices of people I can’t see, eating outdoors on the other side of fences topped with creeping vine or mock orange, sheltered from the street by thick cypress hedges. The sky is dark blue at the top and light blue on the horizon where the rooftops and chimneys stand in silhouette as on a garish diorama. I don’t want to know anything about the world, I only want to be aware of what reaches my eyes and ears at this very moment, nothing else. The street is so quiet that I can hear my footsteps. The rumble of traffic is far away. In the soft breeze I can hear the rustle of leaves on a fig tree and the slow, swaying sound of the high crown of a sycamore, like the sound of the sea. I hear the whistling of swallows flitting through the air in acrobatic flight. One of them, swooping to catch an insect, touched the surface of a garden pond so pristinely that it didn’t cause the slightest ripple. I hear the clicking of bats finding their way through the air by echolocation. Many more vibrations than my crude human ears can detect are rippling simultaneously through the air at this very moment, a thick web of radio signals spreading everywhere, carrying all the cell phone conversations taking place right now across the city. I want to be all eyes and ears, like Argos in the ancient myth, a human body covered in bulging eyeballs and blinking eyelids, or perhaps in the bare, lidless eyes on Carmen Calvo’s door. I could be a Marvel superhero, the Eye-Man, or a monster in a 1950s science-fiction film. I could be a random stranger or the Invisible Man, preferably the one in the James Whale movie rather than in the novel by H. G. Wells. It is the film, more than the book, that really attains the height of poetry.

I want to be all eyes and ears, like Argos in the ancient myth.

Technology applied to life. I read every word that meets my eyes as I walk by. Fire Department Only. Premises Under Video Surveillance. We Pay Cash for Your Car. There is a kind of beauty, an effortless fruition in the gradual approach of night. The word Libre, lit in bright green on the windshield of a taxi, floats above the darkened street as if clipped and pasted on a black background or a page in a photo album. A glaring, empty bus rushes from the mouth of a tunnel like a ghostly galleon in the high seas. Its entire side is taken up by a large ad for gazpacho. Enjoy the taste of summer now. Words fall into a rhythmic sequence. We buy silver. We buy gold. We buy silver and gold. Donate blood. We buy gold. At every bus stop there is a glowing panel advertising a new film. Gods of Egypt: The Battle for Eternity Begins. Teenage Mutant Ninja Turtles: Out of the Shadows. There are invitations, commands, prohibitions that I never noticed when I walked down this street before. Do not leave plastic containers outside the trash bin. No pedestrian traffic. Enjoy our cocktails. Celebrate your event with us. Long before you walk past the sidewalk tables outside a bar you are met by a murmuring choir of voices, tinkling glasses, the sound of silverware and china. I go through the thicket of voices and smells without stopping. Roast meat, animal fat, fried fumes, shrimp-shells, cigarette smoke. Try our specialties, lamb cutlets, grilled meats. Try our lobster rice. The lavish verbal succulence of the lettering on the signs is not unlike the splendor of a Dutch still life. Croquettes. t-bone steak. Gambas al ajillo. Callos a la madrileña. cheeses. Eggplant and gazpacho. Grilled sea bass. Tuna fritters. Paella. Entrecôte. On a June night, the sidewalks of Madrid have a languorous seaside calm like a beach filled with families on holiday. As I drift along, I realize this is the last night I will live in this neighborhood where I have spent so many years. A man and a woman, white-haired but youthful, press their faces together and smile in the window of a store that sells hearing aids. Old people in advertisements smile with a certain optimism. Young people laugh and laugh, opening their mouths wide and showing their gums and tongues. I never noticed this particular sign before, its invitation or command, the white letters on a blue background, the joy of retirees wearing invisible earbuds: Be All Ears. Hear the genuine sounds of life.

Go as far as you choose. I close my eyes so that the sounds can reach me more clearly. On the Metro I sit down and close my eyes as if I’d fallen asleep. I try to keep them shut all the way from one station to the next. I notice the weight of my eyelids, the faint quivering touch of my eye-lashes. When I finally give up and look around, the faces around me are even stranger. There’s a book in my satchel but I don’t read it. I only read the signs I come across, each in turn, from the moment I hurry down the stairs and push open the swinging door. So many things that I never noticed or that I read without paying conscious attention. Entrance. Shorn of articles and verbs, the phrases become crude robotic indications. Estación Cobertura Móvil. Some subway official believes in bilingualism and in literal translations: Station Coverage Mobile. No smoking anywhere on the subway system. Insert ticket. This is a Public Announcement from the Metro de Madrid. Don’t forget to take your ticket. A group of grinning, multiethnic, multinational youths in an advertisement. Join the largest design network in the world. One of them is Asian. He’s wearing glasses and looks at the camera. Another is Black, with a pierced nose and his arm around the shoulders of a girl who is clearly Spanish. Turn this summer into something unforgettable. Use it or lose it. Exclusive opportunities for those who act quickly. Going down the escalator I close my eyes though not completely. For your own safety, hold the handrail. An emergency intercom addresses me with an almost intimate suggestion: Use me when you need me. The city speaks the language of desire. Instead of instantly turning to my phone while I wait on the platform, or searching for something else to read, I stay on my feet and squint at nothing for a few moments. “Use Me” was the title of a song I used to like many years ago. You are being filmed. Over a thousand cameras are watching over your safety. At each step there’s a new instruction or command. Break only in case of emergency. Don’t be afraid to use me, the song said. Commanding voices join the written injunctions. Next train approaching the station. The lack of an article or even a verb heightens the sense of imminence. This is a public announcement. The ground shakes a little as the train approaches. Do not enter or exit subway cars after the signal sounds. I look at people’s faces and listen to their voices. I am all ears. I move closer to a man who is talking on his phone. Nearly every person in the subway car is absorbed in a cell phone screen. A tall, serious girl is reading a Paulo Coelho book. Her choice in literature is a discredit to her beauty. “I’ll tell you everything,” someone says, right behind me. He leans his head against the glass and lowers his voice, so I can no longer hear him over the automated message that begins to announce the next station. “All right, perfect, okay, all right. See you soon.” 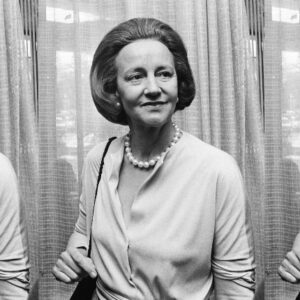 Lit Hub Weekly: July 12 - 16 What Borges’ science fiction got right about the importance of forgetting, according to child psychiatry. | Lit Hub Science ...
© LitHub
Back to top