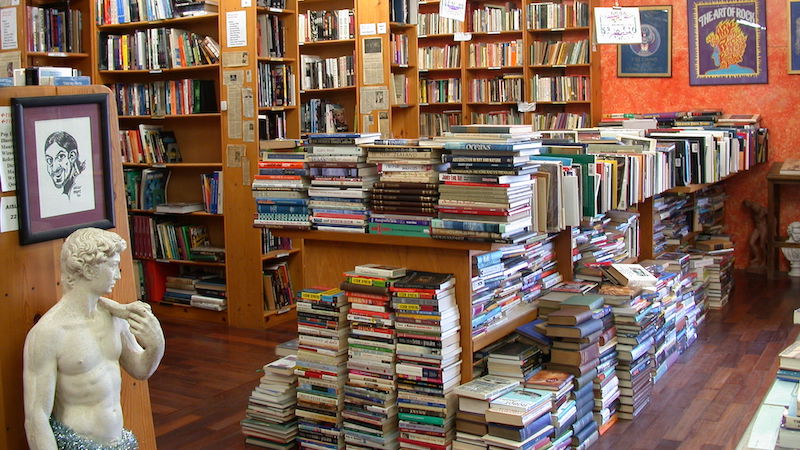 To make matters worse, an iconic L.A. bookstore was targeted by arsonists this weekend.

Late Thursday night, North Hollywood’s Iliad Bookshop, one of the largest used bookstores in the Los Angeles area, was the target of an alleged arson attack. “Around 11:30 pm, someone piled the Iliad Bookshop’s free books up against the store’s main doors and set fire to the stack,” wrote owner Daniel Weinstein on a GoFundMe page created after the fire. “They taped flyers on the store’s walls; the flyers are incoherent but indicate this was a deliberate act of arson.”

We were very lucky: neighbors saw the flames and flagged down a passing firetruck; had the firefighters arrived mere moments later, the entire store would probably have gone up. As it is, we suffered heavy damage to the main entry. The doors (which are metal) are still functional, but will need to be either replaced or fixed. We lost lighting fixtures, signage, and wood framing; we also suffered damage to the mural on the right side of the doors. Smoke filled the interior of the store, but we were able to rescue our two cats Zeus and Apollo and we’re hopeful that the damage to the books and fixtures is minimal.

We have high insurance deductibles so we need to cover the cost of replacing the exterior lights, sign, and trim, and touching up the mural. We expect the funds we’re looking for to be divided between repair costs and a mural artist.

Weinstein, who has owned the store for 17 years, told CBS News that the “rambling” flyers made him suspect the fire may have been motivated by a hate group. “It could have been, I mean I’m Jewish, so maybe the antisemitism movement that’s happening,” Weinstein said. “Maybe I’m a victim of that. Maybe somebody just didn’t like our customer service here.” He told the outlet that he had never had any kind of similar issue prior to Thursday.

There is one bright spot: as of this writing, the store has raised $22,000, far surpassing their $5,000 goal. Because, as several of the donors say in the comments, fuck Nazis!