To Die in Spring 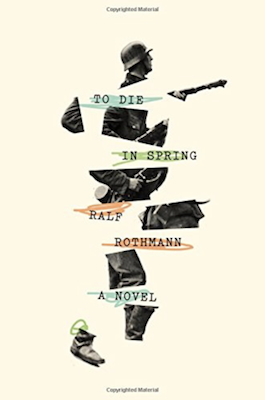 The following is from Ralf Rothmann’s novel, To Die in Spring. Walter Urban’s son is curious about Walter’s experiences during World War II. But, Walter dies, leaving nothing but the barest skeleton of a story in a notebook, leading his son to fill in the gaps himself. Ralf Rothmann has received numerous awards for his fiction and poetry, including the Friedrich Hölderlin Prize in 2013. He lives in Berlin.

Silence, deep concealment, particularly about the dead, is ultimately a vacuum that fills with truth. When I used to ask my father why his hair was so thick, he would tell me it was because of the war. They had rubbed fresh birch sap into their scalps every day, there was nothing better; it might not have helped against lice, but it smelled good. And even though a child could hardly understand the connection between birch sap and war, I didn’t pursue the question; I probably wouldn’t have received a more precise answer anyway, as was usually the case when my father’s soldiering days came up. The answer would come only decades later, when I held photographs of soldiers’ graves in my hand and saw that many, if not most of the crosses behind the front were made of young birch twigs.

My father seldom smiled, and on the rare occasions when he did, it made him look forbidding. The expression on his pale face, dominated by its strong cheekbones and green eyes, had an underlying melancholy and weariness. His backcombed dark-blond hair–– close-shaved at the nape –– was held in shape with Brisk, his slightly cleft chin was always smooth and the elegant sensuality of his lips seems to have unsettled a fair number of women: there were stories. His nose, slightly too short, had a barely perceptible tilt to it which added a hint of youthfulness to his profile, and at relaxed moments his face revealed a roguish warmth and an empathetic intelligence. But he himself was barely aware of his beauty, and if it had ever been pointed out to him that he was handsome, he probably wouldn’t have believed it anyway.

All the neighbours liked him; he was always helpful, the word ‘respectable’ was often used when his name came up, his appreciative mates in the mine called him the Pickaxe Man and hardly anyone ever tried to start a fight with him. He usually wore corduroy trousers, whose velvety shimmer was lost after the very first wash, and jackets from C&A; the colours were always carefully chosen, suggesting a certain refinement in the selection process, a delight in a tasteful combination, and he would never have worn trainers or unpolished shoes, towelling socks or checked shirts. Although his posture had suffered from his hard work as a dairyman and later as a miner, he was that rare thing –– an elegant manual labourer. But he had no friends, and didn’t try to make any either; he lived his whole life in a silence that no one wanted to share with him –– not even his wife, who had coffee with all their neighbours and went dancing without him on Saturday evenings. In spite of his bent back, his continual seriousness lent him an intimidating authority and his melancholy didn’t just consist of the tedium of the daily grind, didn’t stem from back-breaking labour, irritation or unfulfilled dreams. People didn’t clap him on the shoulder and say, ‘Come on, Walter, chin up!’ His was the seriousness of someone who had seen something more potent than the others, who knew more about life than he could say and who sensed that even if he had the language to express what he had seen, there would be no redemption for him.

Haunted by his past, he cycled to the mine in all weath­­ ers and, apart from his many injuries and broken bones from rockfalls, he was never ill, never got so much as a cold. But his almost thirty years as a faceworker below ground, the countless shifts and overtime operating a compressed-air hammer on the coalface (without any kind of ear protection, as was customary at the time), meant that he lost his hearing and could hardly understand anything or anyone –– apart from my mother. Even today it’s a mystery to me whether it was the particular frequency of her voice or the way she moved her lips that enabled him to converse with her quite normally. Everyone else had to shout and gesticulate if they wanted to say anything to him, because he didn’t have a hearing aid; he didn’t like wearing one as they supposedly produced interference and painful feedback. It made communication with him very taxing and made him even more isolated, even within the family.

But I, for one, always had the impression that he wasn’t unhappy in this unquestioning silence, which condensed around him more and more from one year to the next. Worn down by work in the end, prematurely retired and having quickly become an alcoholic –– out of shame, I think –– he asked little more from life than his newspaper and the latest crime novel from the kiosk, and in 1987, just after he had turned sixty, when the doctors informed him of his imminent death, he barely showed any concern. ‘No knife is coming anywhere near my body,’ he’d said even at the start of the illness, and neither his smoking nor drinking diminished in the least. He ordered his favourite meal –– fried potatoes with scrambled eggs and spinach –– a little less often than usual, that was all, and he took to hiding his vodka from my mother in the cellar, under the coal.

When he retired, I gave him a fine notebook with a request that he use it to sketch out his life for me, record any notable episodes from the time before I was born, but it remained almost empty. He only jotted down a few words, perhaps words that were keys to his story, foreign-sounding place names, and when, after his first stroke, I asked him to describe at least those weeks in the spring of 1945 more precisely, he wearily dismissed the request and said in a sonorous voice that seemed to ring out from the hollow of his deafness, ‘What’s the point? Haven’t I already told you? You’re the writer.’ Then he scratched himself under his shirt, stared out of the window and added in an undertone, ‘I hope all this shit will be over soon.’

Our inaudibility to him made us mute among ourselves; my mother and I sat for days by his deathbed without saying a word. The room had been painted lime green to head height and above the bed there hung a print of a painting by Édouard Manet, Country House in Rueil. I’d always liked the painting, not just because of its apparently weightless, almost musical execution and the summer light with which it was softly imbued even though not a scrap of sky can be seen: the ochre-coloured villa, surrounded by trees, shrubs and red flowers, with its pillared portal, also bears a passing resemblance to the manor house of the farm in northern Germany where my father did his milking apprenticeship in the early 1940s. It was there that my parents first met, and in my childhood I spent a few happy holiday weeks in the area. Relatives still lived on the nearby canal.

A manor house of the soul, on which the evening sun now fell. The plastic frame creaked in the last of the warmth, and my mother, who wasn’t leaning back in her chair and whose handbag was hanging in the crook of her arm, as if she were just paying death a quick visit, set a water bottle down in the shade. Immaculate as always, having used far too much hairspray, she wore suede pumps and the midnight-blue pinstripe suit that she had made herself; when she sighed quietly I could smell a faint whiff of alcohol.

In the eighteen years that I spent living with my parents, and later, too, during my rare visits at Christmas or on birthdays, I had hardly seen a gesture of tenderness pass between the two of them, no touch or embrace, not so much as a passing kiss; instead they repeated the usual remonstrances about everyday business or shattered the furniture in a drunken frenzy. But now my mother pressed her forehead against my father’s and stroked the hand of this increasingly confused man, if fleetingly, as though ashamed in front of her son, and he opened his eyes.

Still faintly rimmed by ingrown coal dust, they had been unusually big and clear for days; the sclerae shimmered like mother-of-pearl and in the dark green of his irises one could see the brown pigments. Quivering, he raised a finger and said, ‘Did you hear it?’

Quite apart from his deafness, it was completely silent; not a sound came in through the window, which looked out on the blossoming gardens of the hospital, or from the corridor. Regular visiting hours were over, dinner had been served long ago and the dishes cleared shortly before. The night nurse had already done her rounds and my mother shook her head now, the movement barely noticeable, and murmured, ‘Ah, now he’s back in the war.’

I didn’t ask how she knew. The intimacy that shone through in that knowledge was enough to tell me that it was true, and a little later he actually cried out, ‘There!’ and looked from one of us to the other in helpless anxiety. ‘Again! Don’t you hear it?’ His fingers wandered in circles over his chest, snatched up his nightshirt and smoothed it flat again; he gulped, then sank back onto the pillow, turned his head towards the wall and said with his eyes closed, ‘They’re getting closer! If only I knew a place where we could go . . .’

From To Die in Spring.  Used with permission of Farrar, Straus and Giroux . Copyright © 2017 by Ralf Rothmann.

15 Famous Writers on the Perils of a Formal Education 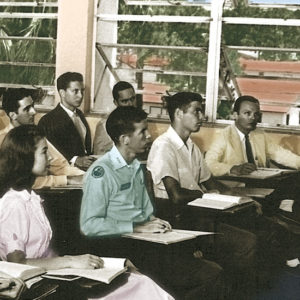 15 Famous Writers on the Perils of a Formal Education Students all over the country are beginning to head back to school, and some, I imagine, aren't too happy about it. If that's...
© LitHub
Back to top