Ryan Chapman hosts Nerd Jeopardy, the online literary game show. Tonight Ryan is joined by Deb Olin Unferth, author of Barn 8, and Adrienne Raphel, author of Thinking Inside the Box. The show—which takes place on Zoom—is being simulcast here via YouTube, so just like normal Jeopardy, you’re just going to have to follow along at home, yelling at the screen.

(Program note: beginning the week of 4/27, Nerd Jeopardy LIVE will be airing on Wednesdays at 8pm.)

100: After a day in court, Atticus Finch takes the edge off with a little Patrón.

200: Raskolnikov may have eased his guilt by listening to “Oblivion” or something from 2020’s Miss Anthropocene.

300: Robert Penn Warren’s Willie Stark might have had a livelier gubernatorial campaign running against Joe Exotic.

[All the Tiger King’s Men]

400: You could soundtrack Colson Whitehead’s latest to these maligned Canadian rockers, but I wouldn’t recommend it.

500: Stephen Dedalus may have had more breakthroughs had he read the famed Swiss psychiatrist’s Red Book.

[A Portrait of the Artist as a Jung Man]

100: You will not find the world’s largest collection of Shakespeare texts in England; it’s in this D.C. library.

200: This play opens on a ship, and is the only Shakespearean work to feature a wizard.

Shakespeare first wrote “the game is afoot” in Henry V; this author popularized it in 1905’s “The Adventure of the Abbey Grange.”

400: In the third act of Anthony and Cleopatra this state is called “the green sickness.”

500: Superstitious actors refer to this as “the Bard’s play” while in a theater.

100: Perseverance pays off: his first book, A Time to Kill, was rejected 28 times before a small press took it on.

200: While known for psychological thrillers, she published her most personal work, The Price of Salt, under the pseudonym Claire Morgan.

300: In her book The Woman in Cabin 10, a travel writer on a cruise ship thinks she hears a murder.

400: His character Robert Langdon is a “symbologist” at Harvard, which *checks notes* is not a real profession.

500: Four years before Valley of the Dolls sold 30m copies, she was an actress with diminishing work, an unemployed husband, and steep medical bills.

C4: WATER, WATER ALL AROUND…

100: His much-praised 2019 debut novel is comprised of a letter by Little Fox to his mother.

Banville, Hemingway, and Murdoch all titled novels with this body of water.

300: Gary Shteyngart’s latest takes its title from this village in Long Island.

400: Bernard, Susan, Rhoda, Neville, Jinny, and Louis each speak for long stretches in this Woolf novel.

500: This Richard Adams adventure takes place in southern England, though not on the coast: it’s set in the leporine warrens of the interior.

C5: AND BOOZY DROPS TO DRINK

100: When next in Vegas, you might adopt his habit of “drinking Singapore slings with mescal on the side & beer chasers.”

200: Despite his struggles with alcoholism William Sydney Porter wrote over 400 stories under this name–many with twist endings.

300: Greek poet Alcaeus was onto something in 600 B.C. when he wrote how this brings out truth.

500: This American writer favored eggnog; his family recipe used both brandy and rum. Most of us would call out, “Nevermore!”

400: She was a secretary at Amnesty International before writing became the best-selling series of all time.

600: In May 2016 she held a Patreon to fund her transition from counseling psychologist to full-time writer. Three months later she won her first Hugo Award.

800: He gave a Long Goodbye to the 9-to-5 after losing his job as an oil executive during the Great Depression.

1000: He wrote 1961’s The Wind from Nowhere in ten days using “all the clichés there are,” in order to fund what he considers his real debut, The Drowned World.

200: John le Carré’s chilly third novel was his breakthrough, considered by many his apex: the UK Crime Writers’ Association awarded it the best of the last half-century.

[The Spy Who Came in from the Cold]

400: His 2013 book for adults The House at the End of the Lane deals in memory and the supernatural in rural Sussex.

600: With themes of omnipresent advertising and assaultive standards of beauty, this Alexandra Kleeman novel is aptly named.

800: Khrushchev personally approved the publication of this Solzhenitsyn novella in 1962. (Whereas The Gulag Archipelago was samizdat until 1989.)

[One Day in the Life of Ivan Denisovich]

1000: The title of this Douglas Adams work comes from a salutation by Earth’s dolphins as they leave the planet.

[So Long and Thanks for All the Fish]

200: Her characters are concerned with art monsters, marriage, and the Weather.

400: While this Jerzy Kosiński work wasn’t as commercially successful as its predecessor The Painted Bird, he could take solace in its National Book Award win.

600: Geoffrey O’Brien called this New York Review of Books co-founder’s Sleepless Nights “a novel without a plot.” It might be better described as a collage.

800: Friends say Clarice Lispector was most nervous about publishing this short work in 1973. It was hailed as an instant masterpiece.

1000: This B.S. Johnson work is comprised of 27 unbound sections of varying length, which can be read in any order.

200: This Toni Morrison novel–her first–is set in her home state of Ohio.

400: This Joan Mitchell painting inspired the title for this 2009 book by Maggie Nelson.

1000: Anne Tyler’s latest debuted this week on the New York Times bestseller list. But it doesn’t have blue in the title, unlike her Booker-shortlisted novel from 2015.

[A Spool of Blue Thread]

CLUE: This longtime New Yorker writer opened The Journalist and the Murderer with the lines, “Every journalist who is not too stupid or full of himself to notice what is going on knows that what he does is morally indefensible.” 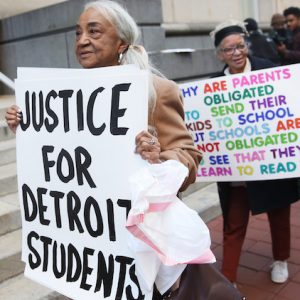 It's a big week for literacy advocates all around the country in light of a federal appeals court ruling that enshrines the constitutional...