Special surprise! Tonight’s winner was serenaded with a champion’s anthem by Westin Glass, member of the band Hurry Up.

Next week’s special guests are Edan Lepucki (Mothers Before) and Jazmina Barrera (On Lighthouses)!

100: Combine Charlotte Perkins Gilman’s “Wallpaper” and “So Much” of this from Percival Everett to produce this “Loving” novelist.
[Yellow, Blue, Green]

200: Depending how much of Esi Edugyan’s “Washington” you blend with Wilkie Collins’s “Woman,” you’ll get “Fifty Shades” of this.
[Black, White, Grey]

100: Alfred Hitchcock bought all the copies of this Robert Bloch novel to preserve the surprise in his film adaptation.
[Psycho]

300: This British writer advised readers to skip “Keep the Aspidistra Flying” and “A Clergyman’s Daughter,” which he only wrote for money.
[George Orwell]

400: CLUE CREW WITH TRACY O’NEILL
She was happy to see her science-fiction novel “Survivor” kept out of print, saying it was “offensive garbage.”
[Octavia Butler]

500: He so detested the reaction to the success of his debut (and its film adaptation) that he spent much of his life dedicated to shark conservation.
[Peter Benchley]

100: Its title may sound like a Hogwarts class, but this Kelly Link collection has become almost canonical since 2005.
[Magic for Beginners]

200: This word for a poetical unit is also Italian for “room.”
[stanza]

300: JFK started a modern tradition by asking this poet to read at the 1961 inauguration.
[Robert Frost]

500: Everyone’s after a spice with this name in Frank Herbert’s “Dune”; it’s another word for mixture.
[melange]

100: This Nicole Dennis-Benn novel might be what you hear if your shuttle’s gone off-course. Or if you’re at a Beatles concert.
[Here Comes the Sun]

200: This celestial marvel is primarily composed of ice particles circling the sixth planet in the solar system. Also, a Sebald novel.
[The Rings of Saturn]

300: DAILY DOUBLE
A baker’s dozen of our only natural satellite will get you this Charles Frazier novel.
[Thirteen Moons]

400: This 1990 Shirley Hazzard work is considered a modern classic, titled for the movement of the second planet from the sun.
[The Transit of Venus]

300: His Oresteia plays are the only extant trilogy from ancient Greek theatre.
[Aeschylus]

400: The title of this final work in J. M. Coetzee’s “Jesus” trilogy shows he isn’t afraid of spoilers.
[The Death of Jesus]

500: He fulfilled many authors’ greatest fear when he died one book into his announced Epic of the Wheat trilogy, which started with “The Octopus.”
[Frank Norris]

Category 1: THE DEATH OF PUBLISHING

200: In 2010 “The Independent” asked if agent Andrew Wylie’s direct negotiations with Amazon over this format spelled the death of publishing.
[ebooks]

400: In the 1980s this retailer began printing editions of public domain classics, which publishers worried meant doom for their backlist.
[Barnes & Noble]

600: In the late 1800s some publishers dismissed the rise of nationally distributed general magazines, arguing this method of reaching readers was fundamentally untenable.
[advertising]

800: CLUE CREW WITH MATT GALLAGHER
In 1939 publishers were terrified of Robert de Graff’s plan to issue 25-cent reprints in this format would destroy the industry.
[paperback]

1000: In the late sixteenth century this British royal centralized printing in London, authorizing the Stationers’ Company to destroy rogue, unlicensed presses.
[Elizabeth I]

Category 2: RHYME TIME
200: The poet behind “Magical Negro” may compose with a neon highlighter. She may not. [Parker Marker]

400: DAILY DOUBLE
This poet’s ode to the Brooklyn Bridge is great, but imagine what he could do with the subject of Denis Johnson’s “Dreams”?
[Crane Train]

800: When the prolific “Census” novelist is caught in a sudden, windy rainstorm and needs to telephone his rescue.
[Ball Squall Call]

1000: When irritating the “Trust Exercise” author is part of your grand scheme.
[Annoy Choi Ploy]

400: This “Comma Queen” once wrote, “Among my fellow punctuation nerds, I have a reputation as someone who has no use for semicolons. I don’t hate semicolons; I hate writing about semicolons.”
[Mary Norris]

600: Her story collection “Krik? Krak!” is named for a Haitian call-and-response used to initiate a good storytelling session.
[Edwidge Danticat]

200: The pastry chef recommends pairing Nico Walker’s debut with something from “The Goldfinch” novelist.
[Cherry, Tartt]

800: Heart set on the “There There” author? Take solace in this Jeanette Winterson book from 1985.
[Orange, Oranges Are Not the Only Fruit]

200: He wrote his first book, “Hear The Wind Sing,” while running a jazz bar called The Peter Cat.
[Haruki Murakami]

400: Dublin’s first cinema was opened by this writer, but floundered after he left to teach in Europe.
[James Joyce]

600: Twelve years after his military service and a memorable experience in Dresden, this novelist managed one the first Saab dealerships in the U.S.
[Kurt Vonnegut]

800: You might assume this former head of state won the Nobel Peace Prize, he in fact won for the Literature category, in 1953.
[Winston Churchill]

1000: Everyone knows Francis Scott Key wrote “The Star-Spangled Banner,” but he wasn’t a full-time poet. He made his living through this profession.
[Lawyer/Attorney]

CLUE: While Benjamin Button is Fitzgerald’s creation, Benjamin Bunny is Potter’s–and cousin to this eponymous character.

How the Black Press Battled Military Discrimination and Won 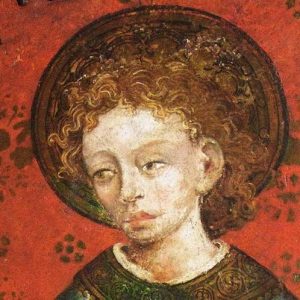 Writ Large is a Lyceum original podcast about the books that changed the world. In each episode, host Zachary Davis interviews...
© LitHub
Back to top