Sign up for next week, May 20, with guests Tracy O’Neill and Matt Gallagher.

100: This protagonist, nominally the good guy, has ripped out throats, thrown guys from helicopters, and killed an estimated 70 people across Lee Child’s books.
[Jack Reacher]

200: Korede’s plans are always being interrupted by her bloodthirsty sibling in Oyinkan Braithwaite’s novel.
[My Sister the Serial Killer]

300:  In this bestselling Canadian’s cozy mysteries you’ll find Chief Inspector Armand Gamache getting to the bottom of things in rural Quebec.
[Louise Penny]

400: Detective C. Auguste Dupin appears in a few of his stories, including “The Purloined Letter.”
[Edgar Allan Poe]

400: If you’re stuck on Alex Garland’s debut, and want a better view of Upton Sinclair’s work—where you’ll be welcomed by Axl Rose—then hop in one of Barry Hannah’s dirigibles.
[The Beach, The Jungle, Airships]

100: She wrote her way out of poverty in part by fictionalizing her three sisters’ lives in Concord, MA
[Louisa May Alcott]

200: This mediocre Robin Williams movie takes its title from a line in Hamlet’s most famous soliloquy
[“What dreams may come?”]

300: A. M. Homes took the Baileys Women’s Prize for this novel, developed from a short story first published in Granta.
[May We Be Forgiven]

400: Francis Mayes’s bestselling memoir about life in central Italy found new audiences as a 2003 film with Diane Lane.
[Under the Tuscan Sun]

500: While best known for her poetry, she also directed the 1996 feature film “Down in the Delta” starring Wesley Snipes.
[Maya Angelou]

100: Melville returned from his sea tales with this work, subtitled “A Story of Wall Street.”
[Bartleby the Scrivener]

200: Amy Hempel says this story from 1983, one of the most anthologized of all time, was the first one she ever wrote.
[“In The Cemetery Where Al Jolson is Buried”]

300: This translator of Proust and Flaubert won a MacArthur grant for her trademark flash fictions, some just a paragraph long.
[Lydia Davis]

400: This Georgia-based writer oversaw a menagerie of peacocks, ducks, and turkeys; many of the animals found their way into her short fiction.
[Flannery O’Connor]

500: Saul Bellow didn’t just write, he also translated: we have him to thank for bringing us this Yiddish writer’s “Gimpel the Fool.”
[I.B. Singer]

Category 5: BARTENDER IS THE NIGHT

100: Hemingway chastised this friend for admitting to an alcoholic decline in Esquire.
[F. Scott Fitzgerald]

200: He confessed to not remembering “Cujo,” he was so blotto during its composition.
[Stephen King]

300: CLUE CREW WITH KRISTEN ARNETT
This fan of the three-martini lunch also threw the Black & White Ball, considered one of the best parties of all time.
[Truman Capote]

200: On deadline for completing “The Hunchback of Notre Dame,” he  locked his clothes in a closet to remove the temptation of leaving the house.
[Victor Hugo]

600: This “Steve Jobs” screenwriter once broke his nose head-butting a mirror “in character.”
[Aaron Sorkin]

800: It’s a mystery how it worked, but she liked plotting her books while eating apples in the bathtub.
[Agatha Christie]

1000: Writer’s block? Try writing while your wife drives you around Paris in a Model T, running errands. It worked for this polymath.
[Gertrude Stein]

200: The New York Times received this colorful nickname due to its high ratio of copy to graphics.
[The Grey Lady]

400: CLUE CREW WITH KATIE WHITTEMORE
Though Mark Twain wrote for the Sacramento Union, it was this newspaper that first employed him upon his move out west in 1864.
[San Francisco Chronicle]

600: The first school of journalism in the U.S. is credited to this university, headquartered in the city of Columbia.
[U. of Missouri]

1000: Hunter S. Thompson’s “Fear and Loathing in Las Vegas” started as an assignment for this magazine.
[Sports Illustrated]

200: Don’t steal from one apostle to fend off debts from another, even if it’s recommended by the author of The New York Trilogy.
[Robbing Peter to Pay Paul Auster]

400: DAILY DOUBLE
Cheer up a recently dumped BFF with an optimistic reference to oceanic plenitude. And a copy of “The Lion, The Witch, and The Wardrobe.”
[There Are Plenty of Fish in the C.S. Lewis]

600: Using a single pebble to conquer more than one avian adversary? Enlist the “Dog Soldiers” author.[Kill Two Birds with One Robert Stone]

800: The author of “Native Speaker” and “On Such a Full Sea” knows if you want people to follow you, show them how it’s done.
[Chang-Rae Lead by Example]

200: This prolific author’s “The Haunted Car” might give you goosebumps, and think twice about getting your driver’s license.
[R. L. Stine]

400: David McCullough admitted that before he wrote a 2016 biography of these siblings he knew only they were bicycle mechanics from Ohio.
[The Wright Brothers]

600: Tom Wolfe admitted this NASA book started with the goal of besting Norman Mailer’s “Of a Fire on the Moon.”
[The Right Stuff]

800: Your first encounter with the power of positive thinking may have come from Wilbert and Christopher Awdry, a father-son pair who invented this railway denizen.
[Thomas the Tank Engine]

1000: In his “Vatican Cellars,” Lafcadio embraces the absurd and rejects conventional morality by pushing a fellow passenger from a moving train.
[André Gide]

400: Fiction writers of third-person narration must choose between a limited perspective or this “all-seeing” alternative.
[Omniscient]

600: You might be called this if you’re prone to writing aesthetically pleasing works (or if you follow Emma Roberts’s book recs).
[Belletrist]

800: Dylan Thomas was fond of this type of poem, comprised of nineteen lines.
[Villanelle]

1000: Medea, Romulus, and Cain are all guilty of committing this crime, making subsequent family reunions quite awkward.
[Fratricide]

Behind the Mic: On Ghost Squad by Claribel A. Ortega, read by Almarie Guerra

Oh my (demi)god: Percy Jackson is going to be a TV show. 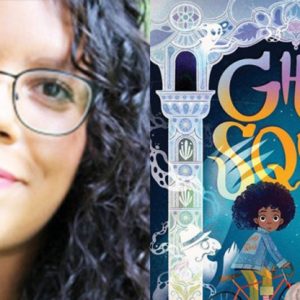 Behind the Mic: On Ghost Squad by Claribel A. Ortega, read by Almarie Guerra