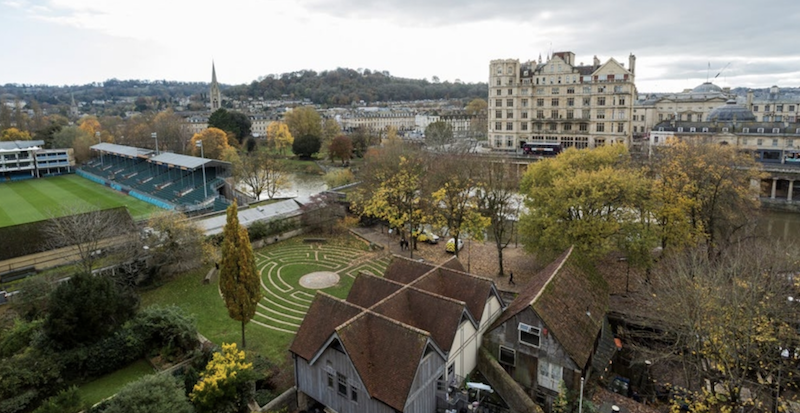 Three houses featured in Jane Austen’s Persuasion are being sold at auction.

Jane Austen lovers (with 4 million pounds handy), rejoice! Three buildings in Bath’s Laura Place, a location described in Jane Austen’s Persuasion, are to be sold in an online auction on December 15. The buildings will be sold together, and the guide price is £4m. Said Peter Mayo of Acuitus Auctions, “These properties are genuinely unique and occupy a prominent position in a beautiful part of Bath. We expect there to be interest, not least because of the location’s associations with Austen.”

What are these associations? Well, Austen described the wealthy Lady Dalrymple living “in style” in Laura Place, which sounds pleasant. But here are a few other mentions of Bath in Persuasion:

There had been three alternatives, London, Bath, or another house in the country. All Anne’s wishes had been for the latter. A small house in their own neighbourhood, where they might still have Lady Russell’s society, still be near Mary, and still have the pleasure of sometimes seeing the lawns and groves of Kellynch, was the object of her ambition. But the usual fate of Anne attended her, in having something very opposite from her inclination fixed on. She disliked Bath, and did not think it agreed with her; and Bath was to be her home.

[Anne] persisted in a very determined, though very silent disinclination for Bath; caught the first dim view of the extensive buildings, smoking in rain, without any wish of seeing them better; felt their progress through the streets to be, however disagreeable, yet too rapid; for who would be glad to see her when she arrived? And looked back, with fond regret, to the bustles of Uppercross and the seclusion of Kellynch.

The worst of Bath was the number of its plain women. [Sir Walter] did not mean to say that there were no pretty women, but the number of the plain was out of all proportion. He had frequently observed, as he walked, that one handsome face would be followed by thirty, or five-and-thirty frights; and once, as he had stood in a shop on Bond Street, he had counted eighty-seven women go by, one after another, without there being a tolerable face among them. It had been a frosty morning, to be sure, a sharp frost, which hardly one woman in a thousand could stand the test of. But still, there certainly were a dreadful multitude of ugly women in Bath; and as for the men! they were infinitely worse. Such scarecrows as the streets were full of!

Plain women, dim buildings, but you get to live “in style”? Sounds like living in Laura Place might be  . . . half agony, half hope.