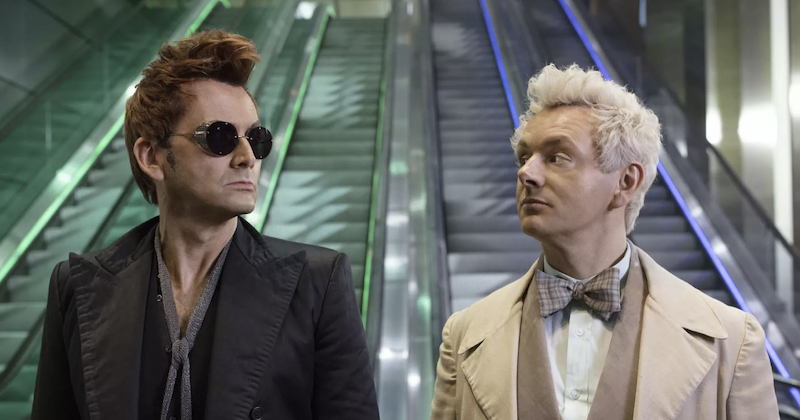 As of this writing, 20,056 people, presumably Christians, have signed a petition asking Netflix to cancel the “blasphemous” television show Good Omens. The petition complains that the show, which is based on Neil Gaiman and Terry Pratchett’s thoroughly beloved novel of the same title, “portrays the agents of Good and Evil as fighters in an arbitrary struggle devoid of meaning and truth. This series presents devils and Satanists as normal and even good, where they merely have a different way of being, and mocks God’s wisdom in the following ways:

• An angel and demon are good friends, and are meant to be earth’s ambassadors for Good and Evil respectively.

• This pair tries to stop the coming of the Antichrist because they are comfortable and like the earth so much.

• God is voiced by a woman.

• The Antichrist, who will oppose the Kingdom of God, is portrayed as a normal kid that has special powers and a mission to destroy the world which he doesn’t really want to do.

• There are groups of Satanic “nuns” that are chosen to raise the Antichrist.

• The four riders of the Apocalypse, God’s means of punishing sinful earth, are portrayed as a group of bikers.

In the end, this is a denial of Good and Evil: morality and natural law do not exist, just humanitarianism and an ultimately useless creed. This is another step to make Satanism appear normal, light and acceptable. We must show our rejection. Please sign our petition, telling Netflix that we will not stand silent as they destroy the barriers of horror we still have for evil.

Which would all be bad enough (from what I’ve heard, God is totally a woman), except that—well, dears, the show is on Amazon Prime, so Netflix really can’t do anything about it, even if they wanted to. “This is so beautiful,” Gaiman tweeted. “Promise me you won’t tell them?”