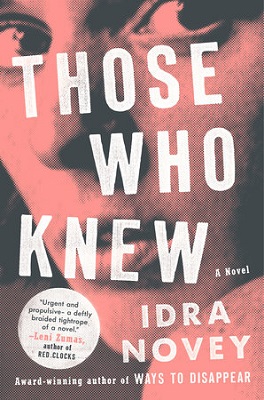 The following is from Idra Novey's novel, Those Who Knew. The novel follows Lena, who suspects that the senator she was previously involved with is taking advantage of a young woman who introduces him at rallies. When the woman turns up dead, Lena revisits her own fraught history with the senator. Idra Novey is the writer of the award-winning novel Ways to Disappear. She also translates authors from Spanish and Portuguese, most recently Clarice Lispector.

Right here, thank you, Lena spoke up from the backseat as they reached the narrow street below Olga’s Sublime. The morning clouds were still low and thick over the port, the rundown homes stacked into the hillside still drained of color. The dense fog off the ocean usually retreated by noon, but it had hung on today, muting even the brightest pinks and yellows of the paint chipping off the doors and window frames of the street below Olga’s. Once the sun emerged, the port city looked less like a soiled and forgotten heap of laundry. The graffiti on the stairwells, the brightly painted doors, even the rusted tin of the roofs came defiantly alive in the sunlight.

Lena had felt more defiantly alive herself once she’d moved here and definitively left her parents’ sealed-off existence. She loved living above the streets she’d marched down as a student, shouting until her throat felt blowtorched. She knew everyone assumed her family,as owners of one of the largest juice factories on the island, had supported the regime—and they weren’t wrong. Her grandfather had hired only workers who professed to support Cato. Throughout her childhood, her grandfather had repeated the same justifications for the roundups that everyone in their world of gated homes had, insisting the numbers of people detained and killed were wildly exaggerated.

Although at night, as a teenager, through the wall her room shared with her father’s study, she’d heard him listening to what the foreign stations were reporting about the island. Her father never brought up what he heard, and Lena never told him how many nights she’d stayed awake, straining to make out what the voices on the radio were saying about all the police shootings that went unmentioned in the island’s newspapers.

Lena had felt more defiantly alive herself once she’d moved here and definitively left her parents’ sealed-off existence. She loved living above the streets she’d marched down as a student, shouting until her throat felt blowtorched.

She’d also never told her parents or brothers about her increasing involvement with either the protests or with Victor. To explain her ever more frequent overnight absences, she’d invented sleepovers to study with girlfriends. One evening as she packed her bag, she’d looked up and found her father in the doorway of her room. She’d thought he was going to confront her, but he’d just remained there with a pained expression, watching her. She’d kissed him and assured him she was meeting up with friends who looked out for her and that she would be fine.

An hour later, at the meeting, Victor had announced to everyone that she’d be in charge of flyers for the next march, and it had felt like a baptism. She drafted each one as if it were destined for a museum. She ran her fingers twice over each fold while Victor paced and strategized in his basement. They began to repeat the ritual several nights a week, Victor thinking out loud, Lena murmuring in agreement as she went on folding and folding, determined to prove she was as committed and relentless as he was. They’d talked endless times about the unfairness of it, how the police wouldn’t dare beat her if they caught her. When Victor told her she needed to be more brazen at the marches, to remember that her family could get her released with no more than a phone call, she had nodded and said of course, had begun throwing more Molotovs than all of the other girls combined.

The day she misplaced the draft of the flyer had been after a night staying up together until four a.m. She’d felt nauseous with exhaustion by the time they got to campus. The draft contained all the information for the next march and she hadn’t intended to take it with her. They all knew agents for the government were crawling like ants through every trash can on campus. She’d checked her books and her bag over and over before she’d gone to Victor’s to see if she’d left the draft of the flyer in his basement.

Moving up the steep stairwell to Olga’s back door, Lena could still recall the splatter of Victor’s spit on her face after she told him she didn’t know where she’d misplaced it. When he pushed her against the wall and grabbed her throat, she’d thought he was just panicking for a second. But then he’d smashed his palm over her nostrils. He’d shouted about her father and grandfather, yelled they were the reason she was so careless and couldn’t be trusted with anything. Each time she’d managed to gasp for air, she’d apologized again, but Victor had just clamped his hand down, harder.

More than ten years later, the thought of those seconds before she’d blacked out in his basement still caused her lungs to stiffen, the memory of her nose crushed under his palm still startling enough to suck all the other contents out of her mind. Reaching the back door of the Sublime, she didn’t know if she was out of breath from the steepness of the steps or from what was replaying in her head.

Finally! Olga called from the front of the store. I have a gift for you.

I need some water first. Lena kissed her friend on the cheek and picked up the plastic bottle Olga refilled each morning at home. Lena had offered once to help her pay for the pipes to be fixed, but Olga had given her a vicious stare and said if she was looking for a corporate sponsor, she’d let her know.

That sweater looks good on you. Olga held out the joint to her. You should order clothes from the afterlife more often.

Lena frowned at this, inhaling as Olga let out a stoned, gravelly laugh, her body as imposing as a king’s in the large stained velvet armchair she kept behind the register. Olga was broad shouldered and big boned, her gray hair chopped short as a man’s. Even high, she had an intimidating air, and Lena didn’t mention the computer monitor sitting on the floor until Olga motioned to it.

I see that, Lena replied. I should have printed the obituary so you could see it’s practically the same sweater. I know Victor pushed her in front of that bus, and he isn’t going to get away with it. With Olga’s tenacious gaze on her, the words felt less convincing in her mouth than they had when she’d declared them on the phone, alone in her living room. She felt the granules of conviction she’d stirred up at her computer already dissolving inside her.

More than ten years later, the thought of those seconds before she’d blacked out in his basement still caused her lungs to stiffen, the memory of her nose crushed under his palm still startling enough to suck all the other contents out of her mind.

When Olga asked if she was over her crazy idea yet of concocting a story for the police, Lena pivoted toward the wall.

You know Victor will use your grandfather to discredit anything you claim, Olga said. I bet he’ll go after your whole family. He’ll get his minions calling for a boycott of every juice coming out of that factory.

Olga motioned for the joint and Lena wordlessly returned it to her. Of course Victor would do that. She had confessed her grandfather’s hiring practices to him as if he were the head priest in the church of reprehensible complicity. Just last week there had been a big story in the news about a right-wing family in the interior that no one had exposed before, a family that had stored arms on their horse farm for the regime. People were tired of rehashing the same familiar cast of villains from the Cato years. They were hungry for other wealthy families who had yet to own up to their share of the blame. Victor could easily make hers the next.

With a quiet huff of defeat, Lena looked down at the white pulse line across her chest, how precisely the zigzag fell at the rise of her breasts, how perfectly her body complied with the design.

Victor and I joked about having a baby and naming her Futura, she told Olga. We were going to take Futura with us when we went to vote.

Olga whistled. Can you imagine if you’d had a Futura with that sociopath?

Lena let her head fall back. Even if she had more evidence than a sweater sent from the afterlife, her accusations would lead to nothing. No one would take her claims seriously. She’d be dismissed on the radio as some bitter ex-girlfriend who’d grown up with maids tying her shoes, a woman raised in one of those sickening families that still wouldn’t use the word regime.

When she’d ranted on the phone with Olga, it had felt possible to postpone the consideration of how easily Victor would make her a pariah. With his cult status on campus, he’d have no problem getting her fired. Her family could lose the factory. They might have to leave the island. Victor wouldn’t just burn up her life, he’d incinerate that of her brothers and their wives, her nephews and little niece who’d just started school. Until Olga said it, it hadn’t occurred to her that the cashier could have been the one who returned the sweater to her bag. It seemed unlikely—but no less so than being haunted.

She squinted up at the water spots extending across the ceiling. She followed the edge of the largest one, its faint yet relentless advance above her head.

From Those Who Knew. Used with permission of Viking. Copyright © 2018 by Idra Novey. 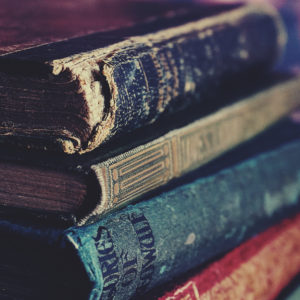 Rare Booksellers Rallied Against An Amazon-Owned Company and Won The typical image of an antiquarian bookstore—sitting quietly next to the banks of Lake Maggiore in northern Italy, in a modest...
© LitHub
Back to top