On today’s episode, Thomas Frank, founding editor of The Baffler and author of The People, No: A Brief History of Anti-Populism, discusses how populism has evolved in America..

Andrew Keen: Your book is essentially a defense of populism. Is that fair, Thomas?

Thomas Frank: Yes, it is. That’s what about half of it is. And then the other half is a counterattack against the people who demonize it.

Andrew Keen: Of course, as so often with your work, it’s a book that begins in Kansas where you began, where you say you often return for your most controversial and provocative ideas. What happened in Kansas at the end of the 19th century that drives your history of populism?

Thomas Frank: Well, they invented the word. We think it came down from the Romans or the Greeks, and we can use it to mean whatever we want, but I was astonished to discover … that the word was actually coined by a bunch of political operatives in Kansas in 1891. What they were trying to describe was almost exactly the opposite of the way we use the word today.

Andrew Keen: It’s an interesting story, and the story is rooted in poor whites and some poor Blacks essentially forming a political coalition against both Democrats and Republicans.

Thomas Frank: Right. The last great third party movement in US history, it was a populist party. It was an effort to build a kind of Labor Party for the United States. The Democrats and the Republicans were regional parties at the time, and they went back to Civil War loyalties and the populists said, no, let’s build a party based on social class. So farmers coming together with workers, uniting working class people from all different backgrounds, although they did not use the phrase working class. They would say producers, from all of these different backgrounds coming together against the other two parties. They had some success for a couple of years, and then as these things always seem to do in America, they petered out or were beaten and that was the end of them.

Thomas Frank is the author of Listen, Liberal, Pity the Billionaire, The Wrecking Crew, and What’s the Matter with Kansas? A former columnist for The Wall Street Journal and Harper’s, Frank is the founding editor of The Baffler and writes regularly for The Guardian. He lives outside Washington, D.C. 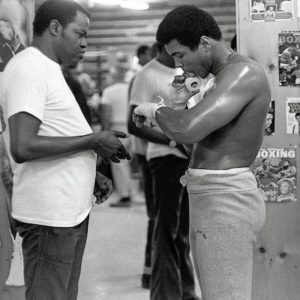 On March 12th, 1963, a 21-year-old heavyweight named Cassius Marcellus Clay sat on a small couch in his hotel room, on the eve of his headlining...
© LitHub
Back to top