Jane Ciabattari on One of the Finalists for Criticism

Namwali Serpell’s provocative collection of speculative essays, Stranger Faces, showcases her originality, clarity, nuanced language, wry wit and cultural range (from Derrida to Keanu Reeves). In this, her second collection, after Seven Modes of Uncertainty (Harvard University Press, 2014), she explores the disabled face (Elephant Man), the digital face and its filmic substitutions (Psycho), the face of the dead, the racially ambiguous face. She traces the lineage of the emoji in typographical art from Adorno, Puck, Ambrose Bierce, and Wittgenstein up to its selection as the Oxford English Dictionary’s Word of the Year in 2015. In the essay “Two-Faced,” she explores the 1845 novel The Bondswoman’s Narrative, which recounts the life of Hannah Craft, an enslaved woman who finally escapes to freedom, a woman who is “almost white” but whose African blood “tinges her person, hair and personality.” Her racial ambiguity, Serpell writes, “poses an ethical dilemma as well as an existential one.” (She also explores the complicated mystery of the author’s identity.)

Serpell’s inventive first novel The Old Drift, which spans nearly two centuries in Zambian history, mixing styles from Gothic to Afrofuturist, won the Arthur C. Clarke award, Anisfield-Wolf Book prize for fiction, the Grand Prix des Associations Littéraires Prize for Belles-Lettres, and the Los Angeles Times’s Award for First Fiction. Her cultural criticism is equally brilliant. In Stranger Faces, her thoroughly explored responses to the familiar surprise us at every turn, seep into the corners of our perception, and make gradual, delicate, enduring shifts in our attitudes. Changes that suddenly highlight all those masked faces we see around us now.

Like a Tidal Wave: Tracing the Inescapable Explosion of
Latin Music 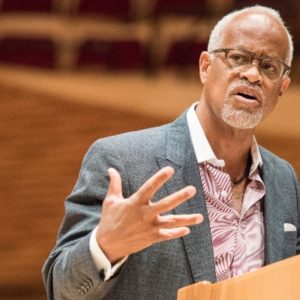