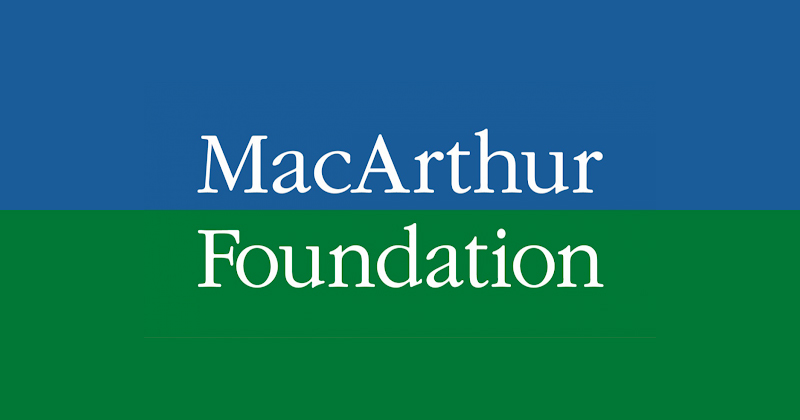 The MacArthur Foundation has announced its annual list of fellowship recipients: 25 individuals working in a variety of disciplines “who show exceptional creativity in their work and the prospect for still more in the future.” Each MacArthur fellow will receive $625,000, which will be dispensed over the course of five years, a no-strings-attached grant that’s meant to support their work in whatever way the fellows choose.

Who was the first person you told when you heard you were getting a MacArthur?

I told my husband. But the day before, I told him that someone at the MacArthur Foundation was trying to reach me because of a translation panel. This really happened. I had to think of a good excuse to get out of the panel. –Don Mee Choi

I told my dog Wendy, who is not exactly a person, but she is also the living being I have been in conversation with the most over the past 18 months. Also, I knew she wouldn’t tell anyone. –Hanif Abdurraqib

I told my wife! She works full time out of our house and it had become a running joke her listening to me do battle with unsolicited spam callers during the day when I’m at home. Basically, me asking to be removed from a call list and fighting through their demand that I listen to their pitch. I used to live in Chicago and have a 773 area code and for whatever reason a lot of the spam calls I receive are also from 773. So, when I saw the number from Chicago, I was preparing for battle. I picked up tersely, ready to plunge into, “take me off your list,” but was caught off guard, confused and then bewildered. All I could do was go upstairs and say, “You’ll never believe what just happened.” –Keeanga-Yamahtta Taylor

On my free days, I start writing in the morning. I can concentrate best in the morning after a brisk walk. Other days, I try to put in 15 mins to an hour of writing or revision after work. When I’m translating, I go for many months without writing, but I’m still thinking about the things I want to work on in the back of my mind. –Don Mee Choi

I write in the early mornings. It is the time day of when I am the most creative and perceptive perhaps because my mind is the clearest and lightest. –Ibram X. Kendi

I always try and get my best writing done in the mid-morning. I used to successfully write early in the morning but over time I have found that I’m thinking more after I have been awake for a while. After I wake up, I read the news for an hour or so while I’m drinking coffee. I spend some time thinking about sports and listening to a livestream of Chicago sports radio. After all of that, I spend some time writing on days that I do not have to teach. Depending on the kind of writing that I am doing, it will probably take me two or three hours to really get into a writing groove. I respect that about my ramp up time and just go with it. When I work on revisions, I find that I can write at any time during the daylight hours. It’s the fun and challenging part of getting the narrative right, finding the right word. –Keeanga-Yamahtta Taylor

“You can’t be afraid.” This is basically what I tell myself all the time. –Don Mee Choi

There is no such thing as writer’s block. There are only writers who aren’t prepared to write. I’ve been there many times. Meaning there have been times when I hadn’t organized my thoughts, planned what and how I was going to write, and/or conducted sufficient research. Now, I engage in a tremendous amount of preparation and research and planning before I write a word. –Ibram X. Kendi

During my first year in graduate school, my adviser told me to write how I wanted to write and not how I assumed I was supposed to be writing as a graduate student. She told me to be myself and it changed my life. –Keeanga-Yamahtta Taylor

I’ve only re-read it a couple of times, but in many ways, Roberto Bolaño’s The Savage Detectives is always with me. It’s bighearted and joyous, a page-turner that is both hilarious and profound. I can’t think of a book that has impacted me more. –Daniel Alarcón

There are lots of books that I read sections of at different times for different reasons. A book that I keep nearby is DuBois and Black Reconstruction. It is such a perfect book that animates so much of my thinking about race and class and American history. A different kind of book that I have returned to for more than twenty-five years is Ted Berrigan’s Sonnets. Maybe because it reminds me of an utterly different period of my life, but I still find his sonnets to be inspiring collages of words, time, color, place and Pepsi. –Keeanga-Yamahtta Taylor

The song “After Hours” by Velvet Underground. –Daniel Alarcón

The best book I’ve read this year is Angela Davis: An Autobiography. Originally published in 1974, a new edition is forthcoming from Haymarket Books in the coming months. It’s a book that I read before but much earlier in my life to remember the details in the way they resonated upon reading again. There are two striking things about the book including the way that we take Davis’s political contributions to our understanding of the world in which we live today. But her writing about prisons and policing in the nineteen sixties and seventies were formative in the development of what we understand to be the politics of prison and police abolition today. There is so much to learn about this historical moment of transition from the height of the civil rights movement and the Black insurgency to the power of the American state in the repression of the Black movement. The other thing that strikes me is how Davis’s story bridges so many different junctures—the Cold War and onset of the civil rights movement, the non-violent movement and the Black liberation struggle, reform, revolt and repression. She is witness and active through each of these conflicts and transitions in ways that are more meaningful than the status of “icon” she is often saddled with. –Keeanga-Yamahtta Taylor

Right now I’m reading Invisible Child: Poverty, Survival & Hope in an American City by Andrea Elliott and it comes out next month. Partway into it and the book is already the most devastating, heartbreaking, and inspiring thing I’ve read in a year. On some surface level, it’s about poverty and NYC, but deeply – in all the most profound ways, it’s about how a kid, a young girl named Dasani, draws people to here, and makes you, as a reader, wonder how much should any kid have to overcome. The book is sprawling and energetic and ambitious in Elliot’s belief that an entire world can matter, if processed through the ideas of a resilient and cunning young black girl. –Reginald Dwayne Betts