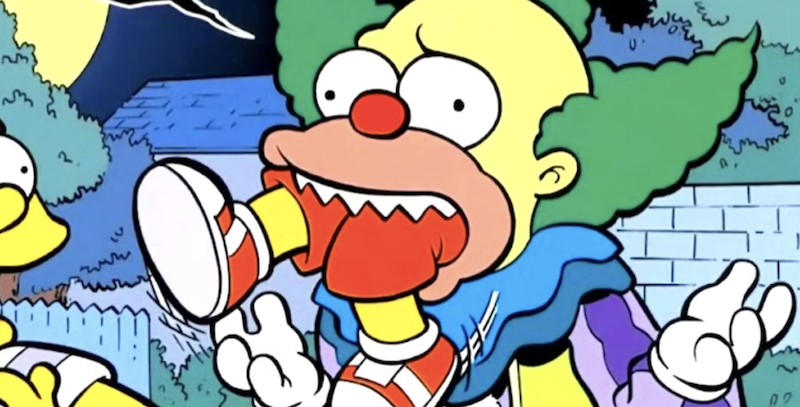 This year, The Simpsons has a Halloween special devoted to Stephen King’s It.

Wow. If my math is correct, there have been 34 seasons of The Simpsons. What the hell, man. One of the most popular recurring specials in the Show That Will Not Die has always been the annual Halloween Special—aka The Treehouse of Horror—and this year we’ll be treated to not one but two episodes of mildly funny, unspooky spookiness.

One of those episodes, apparently, will be a full-on homage to Stephen King’s terrifying 1986 novel, It (you know, the one about the clown-monster in the sewers?). Conveniently, The Simpsons already has a canonical clown character of its own, Krusty. According to executive producer Matt Selman, who was speaking at Comic-Con earlier this year:

We just said, you know, what’s the most popular Simpsons tattoo that we could just do a whole segment about [in reference to a Krusty-as-Pennywise tattoo]. And that of course became a parody of Rock Bottom Remainders star Stephen King’s It. [The episode] is a full-length Treehouse of Horror Presents with Krusty as… we call him Krusto. We can’t call him Pennywise, that’s Warner Brothers, they’re not as cool as Disney.

In the episode Springfield is renamed Kingfield, and one can only assume there will be a Stephen King joke down every dark alleyway… Scary stuff.