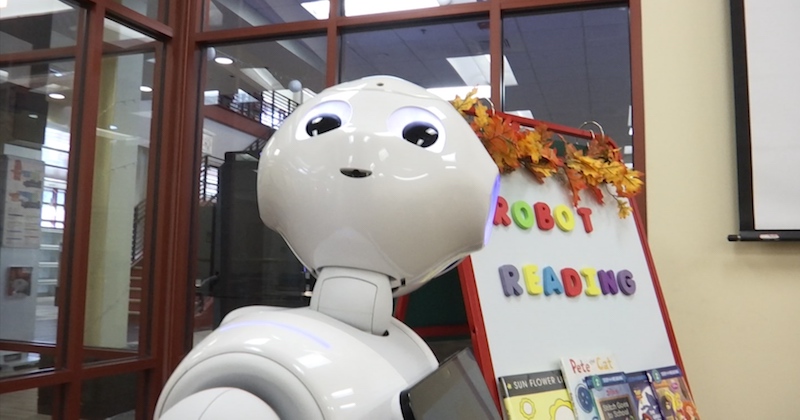 Parents and educators have tried many different tactics to get children to read—games, star charts, personalized books. Now, Roanoke County Public Library is trying something new, which seems both incredibly effective and a little dystopian: encouraging children to read by having them read to a humanoid robot.

Roanoke County Public Library owns Pepper, an advanced robot which can identify faces, read human emotion, and engage in conversation. (In an interview, Tech Insider asks Pepper: “Should I be afraid of you?” Pepper responds: “Have you seen my Instagram? I’m just plain cute.”) Pepper’s eyes light up different colors to indicate what she’s doing at the time—spinning blue eyes when listening, solid green for talking or thinking, solid white for looking at an object, and solid pink for looking at a human. (This is emphasized in Pepper’s informational materials.) Families can book times for kids to read to Pepper at the library—a program called “My Robot Reading Friend.” (Guys, you could just say Klara.)

One such kid, Sadie Brannen, recommends the experience: “I’ve never read to a robot before,” Brannen told WFXR. “Go to the library. It will be fun because you can read to Pepper, the robot.” Pepper is serving her function!

As Roanoke County’s website states, Roanoke County is the first public library in the United States to recruit Pepper to serve as part of the library’s team. Yes, it feels like technology is catching up to us—we might be seeing more Peppers in libraries in the next few years—but on the bright side, I’d feel more listened to if my conversational partner had spinning blue eyes.