When Chloe Maxmin and Canyon Woodward Decided Enough Was Enough

By Chloe Maxmin and Canyon Woodward

I was on break one night in 2018 during a shift at the brewery where I worked near my home in Maine. I had texted Canyon a week before, telling him that I was moving back to Nobleboro (population 1,600) to run for state representative. I asked him if he would move there with me, manage the campaign, and help me create a new vision for rural progressive politics. On that fateful night, after days of reflecting, Canyon texted back: “I’m in.”

Growing up in rural Maine, I cannot remember politics being an issue. At least not one that we talked much about. If I shared the same politics with someone, we might chat about that. If we had different politics, we would be respectful of each other’s perspectives. Almost all the people who raised me are Republicans. There’s Uncle Dick, my honorary uncle who came to all my birthday parties and taught me how to ride a lawnmower. Bruce, a die-hard Republican, taught me how to shoot guns. Dr. Olson, or “Awesome” as we called him, taught me how to ride a snowmobile. This place has always had my heart. I have always known that I would live here and use my existence to fight for my home.

This gut feeling was first put to the test when I was 12 years old and learned about a proposal for a massive development in the beautiful North Woods. Led by Plum Creek, one of the largest development corporations in the country at the time, this project would disrupt the largest tract of undeveloped woods east of the Mississippi River. It was a bad deal for Maine. I could see the need for economic development in Maine’s rural places, but did we have to destroy the land to do that? I connected with advocacy organizations and started to testify at public hearings, write letters to local papers, and do whatever I could to get engaged.

In one big flash, I began to realize that deeper strategies were needed to confront the hidden, manipulative, and threatening behaviors of fossil fuel corporations.

Next, I started the Climate Action Club (CAC) while I was in high school to provide opportunities for students, faculty, and community members to get involved with environmental and climate change work. We were the first student-run club at my school. to reduce plastic pollution, we worked with local businesses to sponsor a community-wide re-usable bag that featured businesses logos and was for sale at stores across town.

The CAC tapped into national networks of youth organizing and started to win grants for projects. We eventually won $5,000 in a national competition to put solar panels on our school—the first time a school in Maine got solar panels without government support. Word of our work spread, and we were featured on the Sundance Channel in one of their docuseries.

My work with the CAC was transformative. It was in meetings with those students, in the halls of that school, in my rural town that I learned the power of a small group of young people to do something good. It also showed me the power and potential of work that is rooted in community.

Next stop was Harvard. I knew that I wanted to study climate change and activism. Two critical things happened during my freshman year. First, I met Canyon Woodward. Tall, blonde, skinny, and known for his charisma, Canyon was an icon of our class. Our friendship blossomed through activism, but we quickly found camaraderie in our love for our rural hometowns, our desire to return to them, and our motivation to fight for where we grew up.

The other turning point was when I learned about a plan to pump tar sands through a defunct pipeline that crossed through Maine. It ran within hundreds of feet of Sebago Lake, the drinking water source for 20 percent of Maine’s population. The line ended in Casco Bay, a huge port, fishery, and economic center. The pipeline is nominally owned by the Portland Pipeline Company, which sounds like a nice local company but is 76 percent owned by ExxonMobil. Blame it on naïveté and growing up in a tiny, safe, rural town, but I had no idea that a corporation like Exxon-Mobil had roots in Maine, let alone destructive roots.

We knew that it would take a host of new strategies and tactics to engage our rural hometowns in the climate fight.

This project opened my eyes to the coercive power of the fossil fuel industry. In one big flash, I began to realize that deeper strategies were needed to confront the hidden, manipulative, and threatening behaviors of fossil fuel corporations. The summer after my first year at Harvard, I interned with the Maine Sierra Club to stop the pipeline. Then 350.org founder Bill McKibben wrote an article for Rolling Stone titled “Global Warming’s terrifying new Math,” in which he alluded to a new tactic to confront the fossil fuel industry: divestment. I went back to Harvard that fall to cofound Divest Harvard alongside Alli Welton and Eva Roben. It was my way of fighting for Maine even though I was in Massachusetts.

Harvard’s endowment is around $42 billion, with very little ethical screening. Any pot of money that big needs to be held accountable in some way. If Harvard divested from fossil fuels, that would send a huge signal to the world that the fossil fuel industry’s destructive actions would no longer be condoned. (Harvard actually did divest just a few days before we finalized this book! on September 9, 2021—about nine years to the day that Divest Harvard was born—Harvard University announced that its endowment would no longer invest in fossil fuels.)

I also saw that almost everyone is part of an institution that has some means of participating in a call for fossil fuel divestment—whether a school or religious endowment or a city or state pension fund. What compelled me most about the divestment movement was the theory of change that drove it. Getting schools, churches, states, cities, and individuals to divest from fossil fuels sent a loud message that the people no longer wanted to associate with the fossil fuel industry.

The idea was that politicians would take note, stop taking money from these corporations, and start listening to the people. And if politicians listened to the people more than corporations, maybe we could pass meaningful climate legislation at the national level. As a Harvard student, I could think of no better way to spend my time.

During our junior year, Canyon and I found ourselves co-coordinating Divest Harvard. Our friendship was forged in the fires of campus activism and grew from there as we began to talk more deeply about politics. But we knew that it would take a host of new strategies and tactics to engage our rural hometowns in the climate fight. Neither of us had grown up attending big marches or rallies. They were always far away from our homes, and the thought of being in a big noisy crowd just didn’t jibe with where we came from. We didn’t know how exactly, but we knew that a climate movement in rural America needed to look different from what we were seeing at Harvard.

We also noticed the huge gaps between movement power and electoral results. In 2013, 35 thousand marched in Washington, DC, to protest the Keystone XL pipeline. In 2014, 300 thousand people flooded the streets of New York for the People’s Climate March. It seemed like the momentum was growing so quickly. But in 2014, there was another big red wave that led to a Senate Republican majority and more Republican state House victories across the country, widening a gap between people power in the streets and electoral politics. This gap had emerged slowly, over decades. But during those years, global warming had become a climate catastrophe. We could no longer afford a politically ineffective climate movement.

The day after I graduated from Harvard in 2015, I packed my stuff into my dad’s truck and drove home to Nobleboro. I wanted to build my life in Maine and understand how to build a new kind of political power that could translate all that good movement energy into real political power. I became a fellow for The Nation, where I explored this topic in my writing. I supported myself with jobs at bars and restaurants while interning in Bernie Sanders’s 2016 campaign and later volunteering on Hillary Clinton’s campaign. In 2017, I was an organizer for a progressive mayoral candidate in the city of Lewiston, Maine.

Although I learned so much about political organizing from these campaigns, I knew deep down that the strategies that I was seeing would not resonate in my rural hometown. Something was still missing even though I couldn’t quite put my finger on it.

In February 2018, I visited Canyon in North Carolina. As always, politics filled our conversations. We reflected on the 2016 presidential election and how the rural vote was responsible for the election of Donald Trump. We saw a deep need to prioritize rural America and build long-lasting political power, to root young people in their rural hometowns, and to create political campaigns filled with community, hope, and inspiration instead of divisiveness, exhaustion, and monotony.

When I came back to Maine, I knew it was time to run for office. I had always imagined running when I was in my thirties. I thought that I needed a couple of graduate degrees, a settled life, and maybe a family to welcome me home. But in 2018, I realized that there was no need to wait. There was no time to wait. Two weeks after my visit with Canyon, I filed to run. 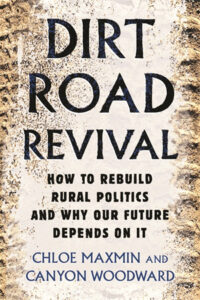 Excerpted from Dirt Road Revival: How to Rebuild Rural Politics and Why Our Future Depends On It by Chloe Maxmin and Canyon Woodward. Used with the permission of the publisher, Beacon Press. Copyright (c) 2022.

Chloe Maxmin, hailing from rural Maine, is the youngest woman ever to serve in the Maine State Senate. She was elected in 2020 after unseating a two-term Republican incumbent and (former) Senate Minority Leader. In 2018, she served in the Maine House of Representatives after becoming the first Democrat to win a rural conservative district.
Canyon Woodward was born, raised, and homeschooled in the Appalachian Mountains of rural North Carolina and the North Cascades of Washington. He was the campaign manager for Maxmin’s successful 2018 and 2020 campaigns, regional field director for Bernie Sanders 2016, and vice chair of the NC District 11 Democrats. 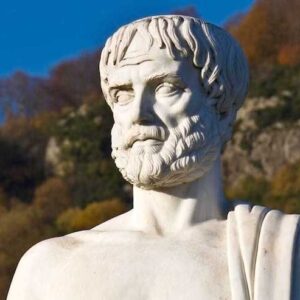 Of the many disciplines Aristotle developed, the study of literature as found in his Poetics is among the most engaging. In...
© LitHub
Back to top
Loading Comments...