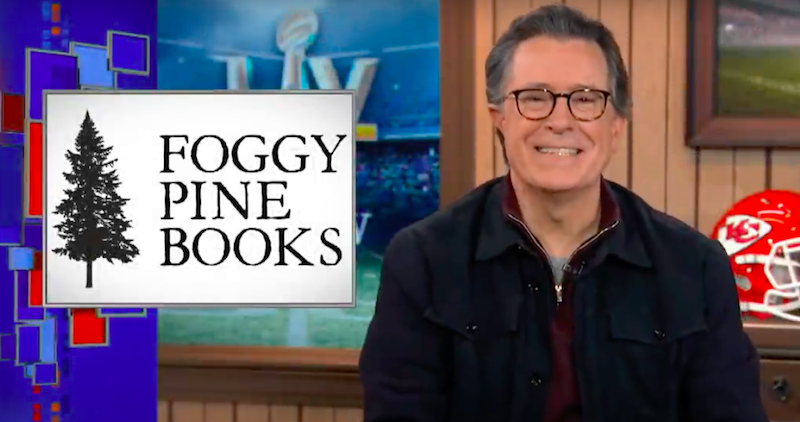 One commercial, however, did bring a smile to this jaded old cynic’s face. On last night’s special post-game installment of CBS’ The Late Show, host Stephen Colbert reminded his audience that the businesses which truly need your help right now are decidedly not the ones that can afford the cost of a Super Bowl ad. That in mind, Colbert and his team selected a struggling small business from a quiet corner of this vast land and, with a little help from Tom Hanks (America’s Dad) and Sam Elliot (America’s Granddad), produced a delightful Prime Time commercial that included skydiving, edible books, a WWII literature testimonial from Hanks, and, of course, a mellifluous voiceover from Mr. Elliott.

The business in question? None other than Foggy Pine Books, a tiny independent bookstore in Boone, North Carolina.

Foggy Pine, like so many of its fellow indies, has been hit hard by the COVID shutdown. Its owner (the incredibly-named Mary Ruthless) set up a Go Fund Me page over the summer in an effort to stay afloat through the pandemic, but estimated that they would need to sell 1,350 books this month in order to survive.

We don’t yet know the degree to which Colbert’s commercial has boosted Foggy Pine’s sales, but judging this tweet sent late last night, they seem pretty damn happy about the whole thing.

We are so excited & honored to be featured on The Late Show with Stephen Colbert! Welcome everyone!! https://t.co/C27yHk8uB7

Here’s hoping Mary and Foggy Pine make it through this difficult stretch, and that the lone independent bookstore commercial of Super Bowl LV encourages everybody to show their local indies some love this week.