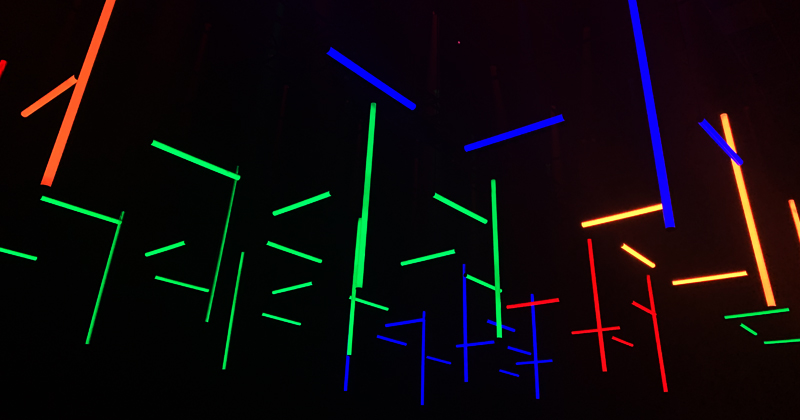 This new production of Blindness is unlike any literary adaptation you’ve ever seen.

In the opening pages of José Saramago’s 1995 novel Blindness, a man is driving home when he suddenly goes blind. The blindness has no apparent cause, physical or otherwise—but it quickly reveals itself to be contagious: soon everyone who was in the doctor’s office the man visits is blind, and then it spreads—through the city, through the country, possibly through the world—becoming a pandemic of blindness from which only one woman, the doctor’s wife, is miraculously immune.

Despite the inherent drama of the story, Blindness seems like a hard one to adapt—not only does it get very, very dark (no pun intended), but the novel is written in a fluid, almost hypnotic style that is untranslatable on screen, but feels inseparable, at least to this reader, from the events it describes. (The 2008 film adaptation starring Julianne Moore received mixed reviews from critics and inspired protests from the blind community.) In his prose, Saramago transmits the creeping—and then rushing—dread and drop of destabilization, of being suddenly cut off from a sense on which you relied so heavily, and then he follows that dread to its logical conclusion. That’s a tall order for an adaptation.

Personally, I think the less you know about this show going in, the better. So if you want my advice: stop reading here, and buy a ticket.

But for the rest of you:

There are no actors. There is no stage. The audience sits in wooden chairs in pods of two, sometimes facing in opposite directions. The entire performance takes place as a recording, piped through noise-cancelling headphones, which is augmented—often very effectively—with creative lighting, and more often, creative blackness. Pitch-blackness, mind you. The narrative, which was written by Tony Award winner Simon Stephens and is narrated by Juliet Stevenson, is necessarily quite abridged from the original novel, but the most important moments are there, and Stevenson does not hold back.

The real triumph, though, is the actual experience of aural immersion: when the room is completely dark, as it often is in this production, Stevenson’s narration feels as though it’s coming from over your shoulder, right in front of your face, right behind you. I found myself not only flinching, as the narrator seemed to move around me, or run to the other side of the room screaming, but actually feeling the presence of a person in the darkness. I was sure I could see her outline, or some aberration in the darkness, moving in front of me. But no, of course there was no one. If that’s not stage magic, I don’t know what is.

This is a refraction, in a way, of the novel—something that only an adaptation of this kind could create. The novel centers on the one sighted person, the doctor’s wife—the reader sees what she sees. But in this adaptation, though the doctor’s wife narrates, the reader (or viewer) is thrown in with the blind. We become the subjects of the story.

But of course it’s not dark the whole time. I was surprised and impressed by how much could be communicated through just light and voice. There is a moment early in the book, and in the adaptation, when a new inmate appears in the ward in which the doctor’s wife and the doctor are being held, bringing with him a small radio. Everyone on the ward has been trapped, cut off from the world, for an indeterminate period of time—in the dark in every sense. At this point, the lights in the theater have been off for the longest period yet. But when the radio goes on, so do the lights—dimly, sweetly. It is a perfect visual relief to mirror the relief of the narrator. It felt like a light going on in the soul.

I should say that the experience was not always entirely pleasant. The chairs were uncomfortable, even for the short runtime of 70 minutes. The lights were sometimes extremely close and bright. It got loud in those headphones. But I I don’t think it could have been otherwise. I might not even change these physical discomforts. It’s a difficult book, and it’s a difficult production; at the end of both, you have the feeling of having been through something.

The production took on a special resonance for me when I saw it in the middle of May—it was one of the earliest off-Broadway shows to begin performances in New York City this year, as the Covid-19 pandemic began to wane, and it was the first time I had attended any kind of in-person event since the pandemic began. (The experience felt very safe and socially-distanced: temperatures were taken on the way in, seats were in spaced-out pods of two, masks were kept on at all times.) I felt keenly aware of the parallels between our world and Saramago’s text—and not just because of the terrifying spread of Covid-19. “This blindness isn’t a real blindness, it’s a blindness of rationality,” Saramago explained. That pandemic has been going strong for a while now.

While the book ends with the first blind man, and then the rest of the group, and ostensibly the city, gaining their eyesight back as suddenly and mysteriously as they had lost it, the end of the play lingers on an earlier moment, in which the women in the group achieve a sort of communal transcendence on the balcony in the rain. It was a nice choice. The doors of the theater opened, drawing all of our attention out into the still-healing street. Then the narration stopped, and an usher revealed the bright red EXIT sign. No one spoke as we all followed our new eyes out the door.