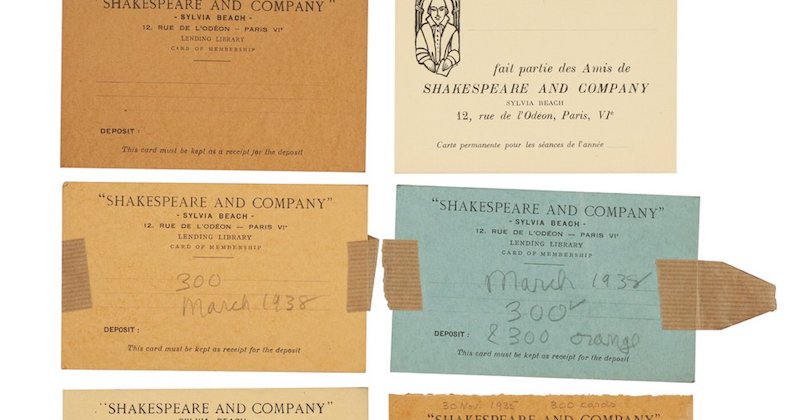 When Sylvia Beach, the New Jersey native who published Ulysses and opened Paris’ Shakespeare and Co. (“the most famous bookstore in the world”), died in 1962, Princeton University purchased and catalogued her papers.

This trove of materials reveals, among other things, the reading preferences of some of the 20th century’s most famous writers, including Ezra Pound, Gertrude Stein, Simone de Beauvoir, and many, many others (the store had thousands of patrons, and Beach kept the lending cards for about 650 of them). The recent digitization of Beach’s papers has made this information easily accessible for the first time.

The Shakespeare and Company Project, a six-year-long collaborative effort between Princeton University librarians, digital humanists, and students, has a rolling release beginning this year.

It’s insanely cool. You’ll be able to learn not only which books and magazines scores of authors checked out or purchased, and when they did it, but also where they lived in Paris, how the reading material circulated over time, the notes booksellers recorded, and more. The database will be updated as the project leads learn more.

Poke around the membership list and you’ll find big names, sure. You’ll also come across less famous but no less interesting figures, too, from a respected French physicist to the woman who started the musicology program at the University of Southern California.

Here are what some people were reading (keep in mind that the entries here are selective and by no means comprehensive).

Names you may recognize…

Aimé Césaire (1913-2008), Afro-Caribbean author and founder of the Négritude movement

Though the exact year isn’t known, the two books Aragon is recorded as having borrowed are Joyce’s Exiles and Portrait of an Artist as a Young Man.