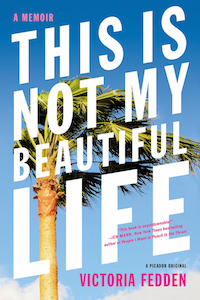 The following is from Victoria Fedden's memoir, This is Not My Beautiful Life. Victoria Fedden received her MFA in Creative Writing from Florida Atlantic University. Her blog "Wide Lawns and Narrow Minds" was voted 2011's best Humor Blog by the South Florida Sun Sentinel, and her personal essays have been anthologized in I Still Just Want to Pee Alone, Scary Mommy's Guide to Surviving the Holidays, Chicken Soup for the Soul, and My Other Ex.

It was almost six-thirty that night by the time we left for Costco, and by then, Ben had finally come home. After what had to have been the longest, strangest day of my life (I mean, seriously, who gets raided and Reiki on the same day?), I still hadn’t eaten. I had little appetite, but figured that if it came down to it, I could make a meal out of Costco’s plentiful free samples.

Mom sat in the passenger seat, chewing Nicorette gum while she tugged at the end of her nose and pushed it down over her upper lip. It was a nervous habit she’d developed early on in her marriage in an unsuccessful attempt to train her nose to look more Jewish. Joel drove with his left hand and manipulated his iPhone with his right as she hounded him about various bank accounts. Ben and I sat in the backseat.

“Is this one still open?” she asked, holding up a green debit card.

“One second, Cecily! I’m on the phone with Bank of America right now.”

“How about the DL Wall Street Spectacular? Did they get that account yet? What about my Marvelous Marketing account? How about Penny Stock Power, Inc.?” she pushed.

The Feds had seized and frozen all her business accounts, and she had no access to funds, but they hadn’t gotten to one of her personal accounts, which still had five thousand dollars in it. Mom and Joel knew they’d seize that one by morning, so we needed to get to Costco before they closed.

“I’m not letting those motherfuckers take my money!” Mom declared. “So we’re going to spend every last cent just to stick it straight up their asses.”

I looked over at Ben. The gleam from the dashboard lights reflected off my husband’s glasses, and his face was illuminated by the glow of the iPhone he never put down. Ben was a frantic googler, always looking things up to make sense of the world, and what a crazy one he’d married into. He knew nothing about shady businesses or criminal dealings. My husband was the son of a firefighter and a paralegal, and had grown up in Laguna Beach. His childhood was spent surfing, and when he went to college in Colorado, he traded his surfboard for a snowboard. After that, he moved to San Francisco, chopped off his dreads, and got a respectable job in commercial banking— then met me, moved to South Florida, and ended up in the back of an Escalade typing “wire fraud” into his search engine. He always said he knew what he was getting into when he married me, but I’d never really believed him. How can anyone be prepared for in-laws who boasted John Gotti’s nephew and the hooker who claimed to have screwed Mohammed Atta the week before 9/11 as their best friends?

Costco and I, on the other hand, were not friends, and that I’d actually agreed to go at all was proof of the seriousness of the situation. I dislike anything enormous and mass-produced, and if I had my way, I would shop only in artfully decorated boutiques (with, of course, the exception of Anthropologie and Whole Foods). Costco’s high ceilings and exposed steel beams freaked me out, not to mention the twenty-foot-high stacks of supersize boxes of Special K. I’m sorry, but cereal should not be that big, and let’s not even get into the number of people who shop there. They need some serious crowd control, because something about five-pound blocks of horse radish cheddar and megaliths of Triscuits makes people lose their ever-loving minds.

Ben loved Costco, as did my parents, though for entirely different reasons. Ben admired the company’s philosophy. He liked not having to buy toilet paper for six months, even if it meant storing fifty-six rolls of it in our entry way because they wouldn’t fit in the linen closet. Costco appealed to Ben’s practical, frugal side, and Ben’s practical side appealed to me because it was safe and sensible, but my parents liked Costco for the very reasons I did not: because it was big and over-the-top, and the apple pies there were about fifteen times the size of apple pies anywhere else. A single pie could feed an entire city block, and often it seemed like my parents were feeding an entire city block. They partied hard and frequently. Their parties were pretty notorious. For Joel’s fifty-seventh birthday, they’d had pony rides, fireworks, and belly dancers, and when you’re regularly hosting fetes like that, Costco is the only place to get the amount of plates, food, and liquor you need. And I guess it was also the best place to go when you needed to blow five grand before midnight.

Once in the store, Ben found a table in the food court where he could mess with his phone and detach from the situation. Joel hit the electronics section, but my mom and I went straight for the food, where she quickly piled the cart high with raw meat and rotisserie chickens.

“Those chickens last only a few days, Mom. Do you think we really need five?” I ventured, but she ignored me.

At first I hesitated, unsure of what I should do, but there is an unmistakable appeal to heedlessly throwing items into a shopping cart—a sense of abandon and, in this case, revenge. Mom and Joel were sticking it to the Feds, pretending to get the last laugh. I soon found myself double-fisting beef tenderloins as wide as my thighs and helping Mom hoist them in on top of the chicken breasts, even though none of the items would end up in my refrigerator. I was just looking forward to enjoying them at my parents’ house all winter. From the beef and poultry, Mom moved on to the real big-ticket items: king crab legs, lobster tails, and jumbo shrimp. Hell, I thought. We should take advantage of the situation and bring home the good shit.

We’d filled five carts to the point of overflowing and had become the bane of the tired Costco staff, who had to wait for us to finish our shopping spree before they could close up and go home. Costco closed at eight, and we didn’t make it to the checkout until after eight thirty, and it took them nearly forty-five minutes to scan our items and box them up. Getting everything into the Escalade turned into an advanced game of Jenga. I ended up sitting on a case of canned beans, cradling a flat of eggs and a four-pack of ciabatta bread, barely able to see my poor husband. He was practically buried under several tubs of hummus and smoked fish dip.

The Escalade stopped at a red light just off our exit, and Mom spotted three homeless men panhandling between the idling cars, each holding a handwritten cardboard sign. One said he was honest and just wanted a beer, another said his wife had a better lawyer than he did, and the last simply identified himself as a stranded veteran.

“I want to give these men a chicken,” Mom told us.

Joel turned the car onto the shoulder and put it into park while Mom hopped out and motioned for the panhandlers to come over. She handed the guy whose wife had the better lawyer a rotisserie chicken and made me undo the four-pack of ciabatta and hand him a loaf. Then she opened the hatchback and began to dig for bananas, pausing to produce a jar of peanut butter, a bag of potato chips, and a single tomato. By the time we pulled out, the three men were making chicken sandwiches on the median. Except for the drone of Fox News on the satellite radio, the car was quiet until we parked in my parents’ driveway.

From THIS IS NOT MY BEAUTIFUL LIFE. Used with permission of Picador. Copyright © 2016 by Victoria Fedden.

The True, Tragic Tale of the Angola Three 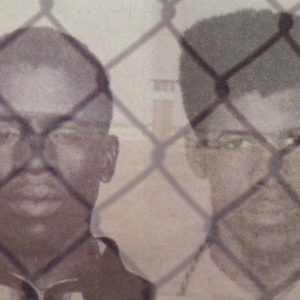 The True, Tragic Tale of the Angola Three The following is from Panthers in the Hole, by Bruno and David Cénou, a graphic history of the lives of Albert Woodfox,...
© LitHub
Back to top