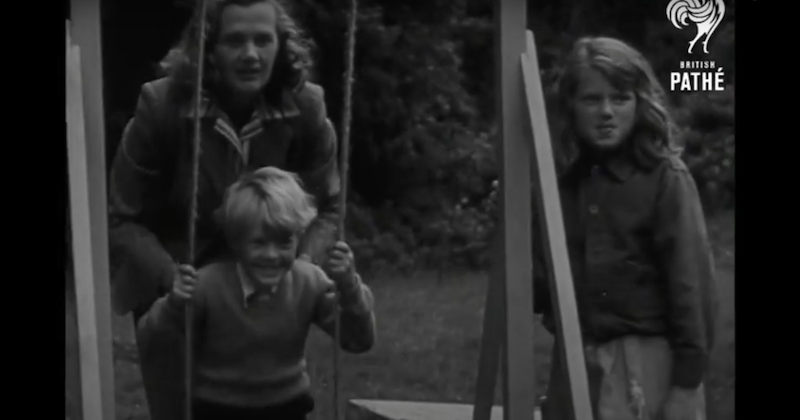 This bucolic 1946 newsreel about Daphne Du Maurier could also be the beginning of a horror film.

Have you ever wanted the inside scoop on midcentury Gothicist par excellence Daphne Du Maurier’s personal life?  Did she really carry on illicit affairs with Gertrude Lawrence and Ellen Doubleday? What really prompted her retreat from public life? Was she really a spy for an underground Cornish separatist movement? What really went on between Mrs. Danvers and the first Mrs. de Winter?

None of these questions are answered in this delightfully sanitized 1946 British Pathé newsreel, which takes the viewer on a not-at-all-staged ride-along with Du Maurier and her “charming children” as they go about their day in the bucolic environs of the English West Country.

As any author-parent will tell you, the best place to get writing done is in the middle of a field, within shouting distance of your children’s deathtrap swing set.

Though not explicitly stated by our guide, we can reliably assume (based on both the telling musical cues and the kids’ abrupt disappearance from screen at the 1:07 mark) that Du Maurier locked young Christian and Flavia inside that playhouse until at least a first draft of My Cousin Rachel was completed to her satisfaction.