Thinking of Black Families, Together and Apart, on Juneteenth

I was in the car with my mother earlier this week when the CFO at her company called. She groaned and put him on speaker. Before I got out to walk into a store, the executive said, “Cindy, I wanted to ask you about that Juneteenth email…” My mother and I are African-American. You can see why I was tempted to stay and eavesdrop. The day had already brought news that Quaker Oats was awkwardly retiring its Aunt Jemima brand.

The executive, a white man, was calling to see how she felt about their company’s decision to offer employees paid leave on June 19. Was the language of the email they sent all right? My mother kindly said that she appreciated his concern, though she wasn’t the right person to offer a historically informed close-reading of an internal memo.

I have never known my mom’s side of the family to celebrate Juneteenth. I somehow didn’t learn what it was until I was in my early twenties, a few years ago. It marks the day in 1865 when Union soldiers told enslaved people in Galveston, Texas that they were free. Were they actually? Congress had passed the 13th Amendment earlier that year but it wouldn’t be ratified until December. Lincoln’s executive order declaring freedom for slaves had been issued two years earlier, to no tangible effect in Galveston.

We know that the signing of laws, the toppling of statues, and the designation of commemorative work holidays can be meaningful actions when performed by the right social actors, well-intentioned ones with power. Still, the circumstances of my upbringing placed a barrier between the holiday and I. I don’t exactly care about June 19, but I do care about those Black folk who love the day for the same reason I once loved the start of summer.

This is what I think of: childhood trips to the small Tennessee town my dad’s side is from—founded by freedpersons after the Civil War—where we had family reunions around this time of year. My dad’s family are the more festive ones (though I didn’t hear the word “Juneteenth” from them either). I picnicked with my grandparents, first and second cousins, great-aunts and uncles, and the aunts and uncles who weren’t blood, but close enough. There was music, food, dancing, shout-outs of family achievements, sunlight, poetry, and small kids spilling out the maw of a one-room church.

Many of my older relatives have died since I was last in that hamlet, almost ten years ago. These days I speak to my grandmother over the phone. She is a widow who lives with family in Ohio. She feels closer to me when I’m in Michigan than when I’m in New York, and when I told her I’ll be going back soon, she said, “Oh, well, I’ll miss you.” I’ll miss her, too, and the thought of being 200 miles away from her instead of 600. I miss the sociability of family and the freedom to move and live without fear.

When you think of Juneteenth, if you do, you might direct your thoughts to the family, Black families, and ask what are the things that have stood in the way of their being together? And what keeps our families together now, within and far outside of politics? I’m apparently bad at receiving and delivering news on time, but when I remembered what had recently brought some light into my life, I called my grandmother and told her: a new family member had just been born, a boy.

A Virtual Evening With Lorene Cary on Ladysitting 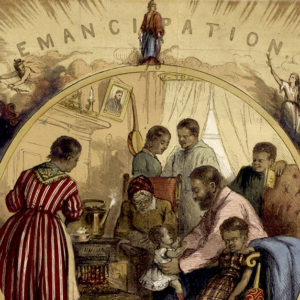 Juneteenth commemorates the June 19, 1865 arrival of Union troops in Galveston, Texas—over two years after the Emancipation...
© LitHub
Back to top