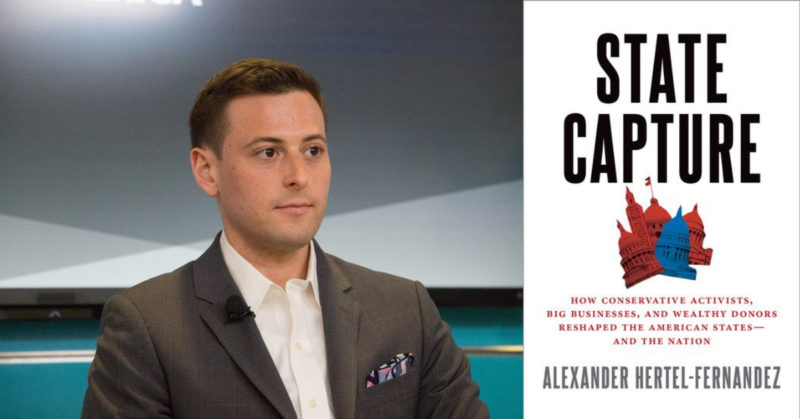 Back on New Books in Politics for the second time in two years is Alex Hertel-Fernandez. You might recall his last book Politics at Work which examined the way employers are increasingly recruiting their workers into politics to change elections and public policy. Alex is back with his latest, State Capture: How Conservative Activists, Big Businesses, and Wealthy Donors Reshaped the American State—and the Nation (Oxford University Press, 2019). He is assistant professor in Columbia University’s School of International and Public Affairs.

In State Capture, Hertel-Fernandez focuses on the development and political power of  three inter-locking interest groups: the Koch Brothers-run Americans for Prosperity (AFP), the American Legislative Exchange Council (ALEC), and the State Policy Network (SPN). Drawing from an array of sources of data, Hertel-Fernandez shows how, since the 1970s, conservative policy entrepreneurs, large financial contributors, and major corporations built a right-wing “troika” of overlapping and influential lobbying group.

Alex Hertel-Fernandez: The troika focuses on cross-state conservative networks: alliances between private-sector business, conservative activists, wealthy donors, and elected officials trying to reshape policy and politics in each state and across multiple states at the same time.
These include groups like the American Legislative Exchange Council (ALEC), which has been operating since the 1970s to create model bills and encourage elected officials to introduce those bills. It also includes the State Policy Network, which is a network of right-leaning think-tanks, conservative pro-business think-tanks that put out research and media commentary in support of many of the same ideas that ALEC promotes. Most recently, the troika can now count on Americans for Prosperity, a federated advocacy group at the center of the political network run by Charles and David Koch. It includes grassroots activists as well as a hefty campaign war-chest that Americans for Prosperity uses to promote many of the same policies that ALEC and the State Policy Network are pushing.

Heath Brown: You look at a range of policy issues that these groups focus on, individually but also in some coordinated fashion. I wonder how that agenda breaks down by policy area. Are these groups primarily focused on the things we might assume, like guns or photo ID laws, or are there other issues that dominate their agendas?

AHF: That balance of interest has changed over time within the troika. There are some groups, like ALEC, that have been historically more focused on social issues like guns, gay rights: the Equal Rights Amendments, for example. Whereas other members of the troika, especially Americans for Prosperity, tend to focus with more laser-like focus on economic regulatory issues. The common agenda that all three members of the troika push on, however, is cuts to government regulation and spending, particularly weakening labor unions, especially in the public sector.

AHF: ALEC’s use of model bills might be worrisome from the perspective of democratic representation in that some lawmakers are simply cutting and pasting legislation, without their constituents’ knowing, from an outside interest group. But it makes it relatively easier to detect the influence of ALEC in state legislatures, as compared to other interest groups, and that’s good for me as a researcher.

I partnered with a graduate school colleague of mine who’s an expert political methodologist, and together we developed methods of text reuse detection, trying to figure out automated methods of detecting instances where lawmakers copied and pasted text from ALEC model bills . . . Facing down tight deadlines and without a lot of help or expertise, it turns out state lawmakers act a lot like undergraduates, racing to turn in written assignments at the end of the semester and turning to plagiarism to get the job done.

HB: Were you surprised by the magnitude of this level of plagiarism? Is it what you expected? Was it more? Was it less? How do you quantify or qualify the size of this phenomenon? Does it happen a lot, or is it more rare?

AHF: At its peak, hundreds, even thousands, of bills came from ALEC model bills, according to the text reuse detection we’d employed. That number initially took me by surprise, but it made more sense the more I interviewed state lawmakers and talked with them about the constraints they faced. In many states, lawmakers don’t have much in the way of full-time professional staff who can help them do research and put together legislation.

Many state lawmakers aren’t paid enough for this to be their only job, so they have other full-time jobs in order to maintain enough income. In many states, legislative sessions are quite short, and in some states they don’t even meet every year. Faced with those constraints, if lawmakers can get bill ideas and research assistance from an outside interest group, that can be a really powerful way of influencing the sort of policies they put forward, and that’s exactly what I find in the analysis for the book. It tended to be states that had fewer staffers, that paid lawmakers less, and that had shorter sessions, that were more likely to plagiarize from ALEC model bill ideas. And within legislatures, it tended to be lawmakers that were more juniors and had fewer staffers that relied more heavily on ALEC model bills.

AHF: Americans for Prosperity (AFP) is the elephant of the troika. It was formed in 2004 out of the remains of an older organization that Charles and David Koch had founded. By now, it encompasses something that looks almost like a political party; in fact, the Washington Post described it as “America’s third biggest political party that you’ve never heard of.” I think that’s an accurate characterization, because like a political party, it’s federated—it has a national office, regional offices, state offices, local offices—and like a political party, it has grassroots supporters. It has, at last count, some 3 million grassroots supporters that stand ready to canvas, to get voters out on election day, to call legislators to push for legislation, and to participate in rallies and protests.

But unlike a political party, there’s no measure of democratic representation; it’s all run from the top at national headquarters. And that national headquarters has a deep campaign war-chest of several hundred millions of dollars that it uses to strategically deploy resources across the states, to run ads, to make campaign contributions, and to put pressure on state governments and members of congress.

As I show in the book, in many state battles over things like MedicAid expansion, environmental regulation, or cutbacks to union rights, AFP is providing the grassroots outside heft that buttresses ALEC’s efforts inside of state legislatures.

Transforming a Tiny Mexican Town into an Iconic Hollywood Backdrop

The New Center for Fiction Is Opening in Brooklyn 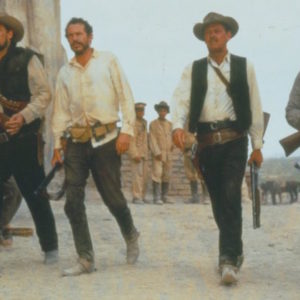 Transforming a Tiny Mexican Town into an Iconic Hollywood Backdrop

Whatever criticisms could be leveled at Sam Peckinpah, no one could question his dedication to a film project once it was under...
© LitHub
Back to top