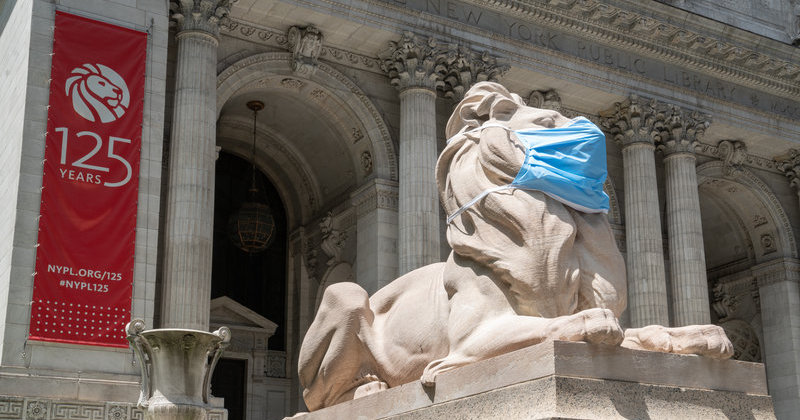 These are the books New Yorkers checked out from the library most this year.

This week, New York City’s public library systems released their annual top 10 checkouts lists. These lists are always an intriguing window into the literary tastes of Gotham’s denizens, but this year’s are of particular interest. Why? Well, I for one am curious to know just how New Yorkers chose to distract themselves while crammed into their tiny apartments for weeks and months on end. Selecting the right title could have been (and may still be) the difference between quietly staving off cabin fever in a comfy armchair, and chasing your psychic son through a hedge maze with an axe.

1. How to be an Antiracist by Ibram X. Kendi
2. White Fragility: Why It’s So Hard for White People to Talk About Racism by Robin DiAngelo
3. Normal People by Sally Rooney
4. Becoming by Michelle Obama
5. Where the Crawdads Sing by Delia Owens
6. Educated by Tara Westover
7. The Silent Patient by Alex Michaelides
8. The Nickel Boys by Colson Whitehead
9. The Testaments by Margaret Atwood
10. Between the World and Me by Ta-Nehisi Coates

1. The Vanishing Half by Brit Bennett
2. White Fragility: Why It’s So Hard for White People to Talk About Racism by Robin DiAngelo
3. The Glass Hotel by Emily St. John Mandel
4. Where the Crawdads Sing by Delia Owens
5. The Dutch House by Ann Patchett
6. The Nickel Boys by Colson Whitehead
7. Educated by Tara Westover
8. Becoming by Michelle Obama
9. Normal People by Sally Rooney
10. Maybe You Should Talk to Someone: A Therapist, HER Therapist, and Our Lives Revealed by Lori Gottlieb

1. The Guardians by John Grisham
2. Moral Compass by Danielle Steel
3. Becoming by Michelle Obama
4. Lost by James Patterson
5. Where the Crawdads Sing by Delia Owens
6. A Minute to Midnight by David Baldacci
7. Educated by Tara Westover
8. Criss Cross by James Patterson
9. Little Fires Everywhere by Celeste Ng
10. The Silent Patient by Alex Michaelides

Michelle Obama’s Becoming, Tara Westover’s Educated, and Delia Owens’ Where the Crawdads Sing are the only books to appear on the lists of all three library systems.

For some reason, Queens Public Library’s list is the only one of the three dominated by commercial fiction.

James Patterson is the only author to have two books appear on the same list.

Ta-Nehisi Coates’ 2015 nonfiction work, Between the World and Me, is the oldest title across the three lists.