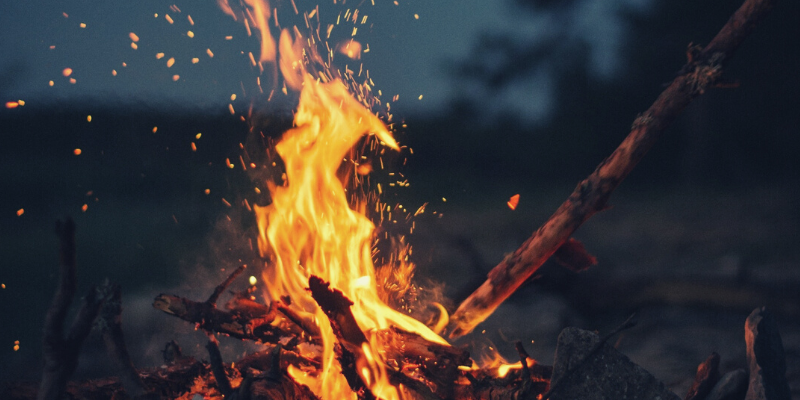 These are the best short stories to read around a campfire.

Little-known fact: today, August 10, is National S’mores Day! Oh, how I miss sitting around the campfire. There is no better place for sharing a well-told story. If you’re out in the woods (and still somehow reading this?), please enjoy a s’more (or, like, seven) on my behalf and take turns passing around these tiny tales of terror. If you’re similarly small-apartment-bound, join me and the Jet-Puffed in hunkering down with these stories, bent over the stove, trying not to burn the place down.

A note: I am a big baby when it comes to horror, so a lot of these recommendations skew atmospherically eerie. But I assure you they are haunting in their own right and that their cadence is perfect for being read around a campfire.

Another note: where I could, I have included links to online versions of the stories. Alas, I was unable to find a few of them, but I promise, dear reader, you will not be disappointed with these collections.

Obviously, we were going to start the list here. There’s a reason Edgar Allen Poe is master of the macabre. You’ll feel this one in the floorboards…

When I was in elementary school, we were all very afraid of a story we stumbled upon by accident in a basket of books we were (for some reason) allowed to read. The book was called In a Dark, Dark Room, and the story in question is “The Green Ribbon,” which tells of a young woman who was never seen without a (yes) green ribbon tied around her neck. Do you want to guess why?

In case you didn’t get enough of “The Green Ribbon” vibes, I would highly recommend Carmen Maria Machado’s story, the first in her debut collection, Her Body and Other Parties. I mean, pretty much every single story in this collection would be great told around a campfire, but the first story is my favorite. It even begins with a detailed description of how it is to be read aloud, how to do the voices and make the sounds and such. It is horrifying for the way it depicts violences enacted on women’s bodies.

I cannot recommend Kelly Link’s Magic for Beginners enough because it will throw you headlong into a world in which everything is charmed with a certain mysticism. Now, Kelly Link has written stories of vampires and zombies and such, but this is not one of those stories. “Stone Animals” is about a family who moves into a new house, and the way it spins itself into the surreal will surely fill the rooms of your house with unrest.

All of the stories in Aimee Bender’s Willful Creatures are delightfully askew. She presents a world knocked off its axis in some small way. “Fruit and Words” in particular, though, tells the story of a woman who stops at a fruit stand on a road trip home from a failed elopement. Inside the fruit stand, there’s a woman selling words, made of the material that is being named. (For instance, NUT is made of various crushed nuts.) It’s not so much scary as it is deeply atmospheric. You’re led further into the shop, where the words go from solids to liquids. You might or might not encounter one that says BLOOD.

Brian Evenson, “Song for the Unraveling of the World”

In Brian Evenson’s short story collection, Song for the Unraveling of the World, there is a story that rattled my boyfriend so much when he read it that he called me immediately and read it to me, so that I may join in his terror. This one follows a deranged man desperate to find his missing daughter.

Part of an aptly named collection called Tiny Nightmares, this story is about a window who wants, more than anything, to be haunted by his dead wife.

From the uncanny mind that brought us The Third Hotel (would recommend reading that one around a really, really big fire that will burn the length of a novel), we have I Hold a Wolf by the Ears, which begins with this story, the first lines of which are: “I want to tell you about the night I got hit by a train and died. The thing is—it never happened.”

You can’t go wrong with Shirley Jackson’s iconic, bone-chilling tale about a fictional town with a terrible tradition. Every year, a winner of the eponymous lottery is selected, the consequences of which are revealed in the final lines.