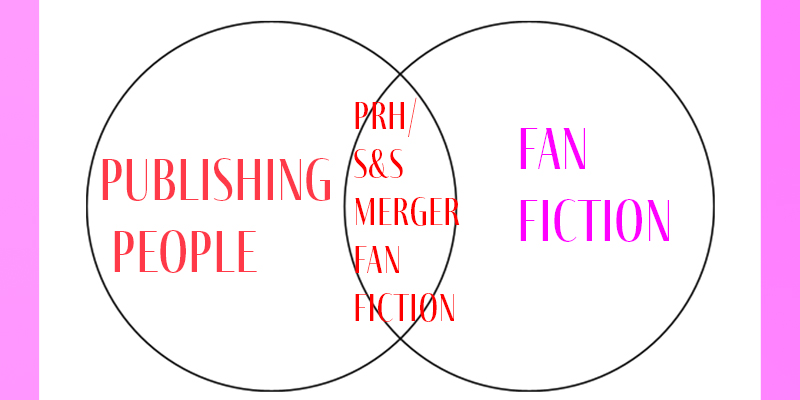 How to explain fan fiction to literary people? Well, first off, acknowledge that those among us who’ve dipped our toes into the charming world of Archive of Our Own have then quickly found ourselves fully immersed and all the better for it. Yes, there are typos, and often stories by 15-year-olds (or 35-year-olds) imagining their favorite fictional universe working in a coffee shop together—it’s called coffee-shopping, a subset of AU, or Alternate Universe fiction, in which you imagine your favorite fandom in a “what if?” scenario that surprisingly often involves coffeeshops—but honestly, those stories are wholesome, and great, and often a path for those who consume and write them to understand their own sexuality (because a lot of them are, I freely admit, porn).

They are also a fascinating reduction of the basic storylines we emotionally seek. My personal favorite, not surprising given my work on CrimeReads, is the hurt/comfort narrative. Simply put, one character is traumatized, and another character helps them heal. They are usually a queer representation of a popular fandom (as is much of the fanfic world), and they are, I’ve found personally, a helpful way to explore and heal from the aftereffects of trauma. Also, sometimes they are indeed quite good porn. I’m not the only one who’s equated reading fanfic to processing trauma, and the genre has seen a huge boost during the pandemic.

So what did I do when I learned of this from the not-so-secret publishing Instagram parody account, you might ask? I went to Archive of Our Own and searched “publishing” as a tag, and dear reader, I found some absolute bangers (both because they are hilarious and also because they have quite a lot of sex in them). But not just sex with humans. There is also sex with giant anthropomorphic penguins, sex with sentient spreadsheets, and the metaphorical fucking of all authors, assistants, interns, and booksellers by out-of-touch CEOs who probably bathe in gold like Duck McScrooge.

“Not yet,” smirked Penguin Random House. “First I’ll fuck the smaller publishers.” He loosened his tie. “Then I’m going to fuck the authors.” He unbuttoned his shirt. “Then the consumer.” He rolled up his sleeves. “THEN I’ll fuck you.”

And of course many of these stories were informed by the ongoing twitter thread from John Maher that’s kept all of us up to date on the merger trial and its stranger-than-fiction moments.

Now, without further ado, the stories.

Author’s description: “Simon Schuster has it all – money, looks, a publishing house that pays him in the six figures, and a net worth in the millions. But something’s missing. There’s a hollowness inside that nothing can ever fill… until a man-sized penguin with a strap-on made of solid gold enters his office and makes an offer he can’t refuse.

A hot and heavy negotiation session later, Simon agrees to a merger of the most salacious kind. His hollowness will finally be filled… again and again and again.”

“Sounds like a great business model,” Simon agreed. “I am constantly trying to think of new ways to reduce author advances. It’s a shame they have to be involved in the publishing process at all.”

“Ungrateful, difficult wretches,” the Penguin said. “Can you believe I offered a debut author two dollars and a bucket of my own piss for the book about their trauma they spent ten years writing, and their agent had the gall to ask for more?”

“If you bend over and take my corporate interest, I’ll fuck you with my golden cock,” the Penguin promised. “And then, together, we’ll fuck every author, editor, and publishing house on the planet. We’ll fuck the entire industry!”

“Good,” Arkusmay said. “I don’t either.” That was the safest way to be a CEO – know nothing, do nothing, and lie through his teeth to anyone who questioned his motives or knowledge of his own business.

“Remember,” he told his employees, already fantasizing about how many of them he would fire after the merger, “Everything is arbitrary in publishing. Success is arbitrary. Bestsellers are arbitrary. So that is why we are… the Arbitrary Abode!”

Of Profit and Loss
Anonymous

Author’s Description: The Profit & Loss sheet is proud of its neat columns and conditional formatting. An editor worked hard helping it become its best self so they could launch an author’s career, and the P&L sheet feels, for the first time since it began life as a few hastily scribbled words on a napkin, like it is both useful and pretty. Nay, beautiful!

Until it overhears something it shouldn’t have…

It wasn’t enough to be pretty, though. One must also be useful, like a Jane Austen heroine plonking away at the pianoforte to impress a future suitor. Like many a young miss had in past times, the P&L sheet took great pride in its talents: the ability to be quiet yet colorful, simple yet full of promise.

There is a horror in perceived insignificance, but with it comes something else, if you know how to look for it. A quiet comfort, whispering that maybe, just maybe, you aren’t the only one. Maybe other people feel just as bad, just as small, as you. And when a few very small, sad, whispering people find each other, they grow bigger, and angrier, and louder, and eventually they become a force so powerful, the world has to acknowledge them.

Author Description: For preventing the poor publishing interns in NYC from being a burden on their employer and for making them beneficial to the public

It is a melancholy object to those who walk through this great city or travel to writing conventions, when they see the streets, the studio apartments, and the subways crowded with poor publishing employees, followed by three, four, or six interns, all in secondhand clothing and begging their employers for a raise. These publishing employees, instead of embracing being able to work for their honest livelihood, are forced to employ all their time in begging sustenance for themselves and their starving interns who, as they grow jaded and bitter, either turn to Only Fans for want of income or leave their dear publishing houses to work a so-called ‘sustainable’ job.

Author Description: One morning, a very handsome and successful superhero named Nicholas D. Hill, PhD, woke up with the disturbing certainty that someone, somewhere, desperately needed an expert in antitrust issues to save them from the cruel ravages of capitalism.

Using his super hearing, he listened in. Someone named Krap was on the stand in a major publishing antitrust trial about a merger, and he was saying some real weird shit. Like how marketing spend doesn’t correlate with advance size, and how publishers have no control over what becomes a bestseller.

But as true superheroes know, you can’t peg your way to success, no matter how golden your strap-on or how strategically you thrust it. Not in New York City, where the streets are patrolled by angry nerds with too many expensive degrees and a burgeoning interest in the guillotine.