There’s No Such Thing As Historical Fiction

It might sound odd to say it, but there is no such thing as historical fiction. And yet if you write a literary novel set in the past, let’s say before the 1950s—though in truth, it might well be much later than that—it is a label impossible to escape. The agents, book scouts and publishers with a wistful sigh shunt you into the historical trap. The author, as the novel is brought to book, might be surprised to discover the term appearing in the jacket text forewarning the unwary reader. Watch then as the book is published and reviewers rush to box the novel as historical fiction.

The novelist bristles because the term denotes a difference. Whichever way one looks, “historical fiction” in code, category and casual shorthand, is a term that sets it apart from the contemporary novel. It is assumed, generally speaking, that the contemporary novel speaks of the times we live in, and the historical novel does something else. It is not uncommon to read journalists lauding a contemporary novel for showing us how we live now. And if the novelist dares read the Goodreads reviews through the cracks of their fingers—quelle horreur!—they might well discover their book is being read mostly as a clever simulation and commentary on the past.

Let’s suppose you are a novelist writing fiction set in an historical era. Ask yourself this question: What reader from 1817 would recognize themselves in a novel written 200 years later? That reader would collapse in a cold swoon and wake up bereft and bewildered. The novelist can expertly summon a voice. They might evoke with uncanny accuracy the morals and codes of an era. For sure they will step carefully through the minefield of anachronisms—or blow themselves up in the name of revisionism. But any idea of an authentic past in the novel is illusion—the historical novel is an act of prestidigitation.

It is an inescapable fact that the consciousness of the writer, the deeper meanings of language, and any articulation of a world view, are shaped by the heat and pressure of the times the writer lives in. The novel itself is formed by unspoken rules that govern what a modern reader will recognize, borne by the history of all the novels written before it—(“The ugly fact is books are made out of books,” as Cormac McCarthy once put it). A novelist can summon what the reader believes to be an authentic past but it is an impossibility to write truthfully of any other time than your own. We reach but cannot touch what has passed into dust and it is best to remind oneself of Emerson, who warned: “time turns to shining ether the solid angularity of facts.” Historical fiction is contemporary fiction and cannot be anything else.

Of course, we read the “historical novel” and marvel at its simulation of the past. But pay attention and you will see the historical novel can speak with cool clarity about what is timeless in the present. The modern novelist through the prism of the past seeks to remove the reader from the noise and rush of the now. A space is made around the reader. The novelist says, let us not be concerned with who we are now, but what we are always. For the historical novel, if it sees clearly, can show us how the modern world is governed by ancient forces: power versus weakness, truth versus falsehood, life versus death. And always there is the problem of living: how can we live well, or how can we survive within a world ranged against such enormous forces?

Emerson in his celebrated essay, “History,” gets to the heart of this problem. History, he says, is not the remote accumulation of facts but instead should be read as a biography of “the universal mind.” What we see and feel in the greatest historical writing reminds us always of ourselves. History, “remedies the defect of our too great nearness to ourselves. This throws our actions into perspective… so I can see my own vices without heat in the distant persons of Solomon, Alcibiades and Catiline.”

In my novel Grace, set during the great Irish famine, 14-year-old Grace Coyle lives through a period of enormous dislocation, disruption and dispossession, where the feelings of anger and resignation in a world shaped by indifferent power are the very same forces we see shaping our own world now.

Does the historical novel steal a trick from the classical novel? Perhaps it does. If you declutter the novel of the contemporary tumult, it will seek the same unswerving truths that hold us true to the classics. We return to Madame Bovary, not for Flaubert’s novel verisimilitude of the post-Napoleonic era, but because we feel Madame Bovary’s yearning frustration as our own. Captain Ahab and Raskolnikov evoke our own existential desire to test ourselves against a vastly indifferent universe. Who at some point in their life has not felt the same conviction and defiance as Hester Prynne? Or Hamlet’s crippling indecision? From the rumbles within each of us, the secret clamor of the soul, a book will become a classic when the problems of its characters are recognized and felt by each generation as their own. This too is how the historical novel seeks to move us. As Emerson puts it, “All that Shakespeare says of the king, yonder slip of a boy that reads in the corner feels to be true of himself.”

Paul Lynch is the author of the novels Red Sky in Morning; The Black Snow, which won France’s Prix Libr’a Nous for Best Foreign Novel, and Grace, which won the Kerry Group Irish Novel of the Year Award, and was a finalist for both the Walter Scott Prize for Historical Fiction and the Saroyan International Prize. He lives in Dublin with his wife and two children.

5 Reasons Why a Writer Should Move to Vancouver 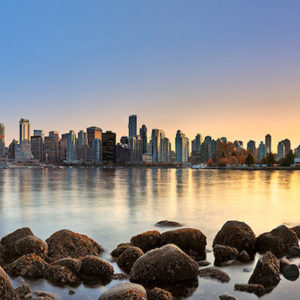 5 Reasons Why a Writer Should Move to Vancouver

Recently, while working at a coffee shop in my Brooklyn neighborhood, my thoughts wandered to a café on the opposite side...
© LitHub
Back to top