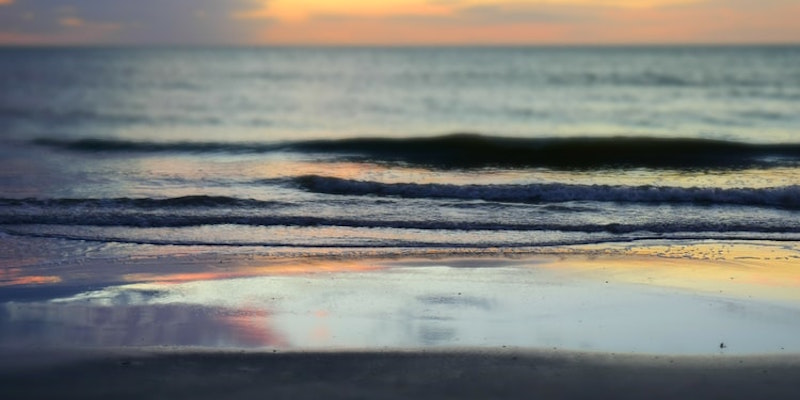 Thereness on the Outer Banks: On Landscape in Literature

Angel Khoury Considers What It Means to Evoke a Place

My remaining companion, Sarah Churchill, hopped into the kayak. I’d always thought of wire fox terriers as earth dogs, but she loved nothing better than a swim. If not a swim, a boat ride would do. To my surprise, the first stroke of the double-bladed paddle came up dripping gold. I raised it overhead. Yes!

On rare occasions on the beaches of the Outer Banks, I’d seen the fringed edge of incoming waves shimmering against the black of a nighttime sea. I’d never seen the shallow waters of the sound glittering with phosphorescence.

Abandoning clothes, kayak, and paddle, I put Sarah overboard. A fish swam by plump with light, its delicate fins outlined in gold. I skimmed my arms across the water, spawning a constellation, then dived beneath the surface, eyes open, each stroke peeling away the darkness. Never mind that we were swimming through bioluminescent creatures too small to see. We were mining light, above and below. I could hardly believe my eyes.

When we read, what do we see? That was Peter Mendelsund’s question in his book by that title, a meditation on how words on paper become alchemized into visions in the reader’s mind—that flash of specificity that makes the fictional dreamscape real. Mendelsund quotes from Kenneth Grahame’s The Wind in the Willows: “…this sleek, sinuous full-bodied animal, chasing and chuckling, gripping things with a gurgle and leaving them with a laugh, to fling itself on fresh playmates that shook themselves free, and were caught and held.”

Place is more than setting. It’s thereness: people’s response to their surroundings.

That might have been Sarah Churchill and me, swimming not in Ratty’s river but in the waters of Roanoke Sound. “This passage,” writes Mendelsund, “is not so much an evocation of a vision of a river as much as it is an evocation of a feeling: the feeling of being-happy-beside-a-river. (A feeling we might all remember.)”

Virginia Woolf writes in her 1929 diary, “I think it will begin like this: dawn; the shells on a beach: I don’t know—voices of a cock and nightingale; and then all the children at a long table—lessons … Could one not get the waves to be heard all through?”

In the space of a few words, are you there, in St. Ives? If so, you likely traveled by way of a familiar path, through a corner of your own mind. Where you’ve experienced dawn. Shells on a beach. Birdsong. Children at a table. Our perception of place, then, is intimately tied to feeling. Landscape isn’t information, but sensation; something you yourself have seen, heard, touched, tasted. In that sense, all fiction is historical.

My first job on the Outer Banks, a few years after college, was washing dishes in a pierhouse restaurant set on spindly pilings. Through cracks in the floor, I could see the ocean’s wash mimicking the work of my hands. Ben Dixon MacNeill’s book The Hatterasman sat propped above the sink.

“The Islands, and the Islanders, remember,” MacNeill wrote in 1958. “They remember, of their own recollection, how the Island looked and what happened on it … and, out of their inherited recollection, how it must have looked to Alexander Hamilton when he glanced shoreward in the waning light of a summer evening in 1773. It is not remembering altogether: it is a continuing of awareness on the Island ‘where yesterday is tomorrow and tomorrow is yesterday and today is compounded of them both.’”

Place is more than setting. It’s thereness: people’s response to their surroundings. Landscape in literature isn’t a travelogue description, but an evocation of a place, first filtered through a character’s mind, then embellished by the reader’s own experience.

The words, they form a picture in my mind—and if I’ve done my job, in yours as well—a Rorschach image imbued with our own experience.

As a student at the University of Virginia, I lived on a farm owned by a man from Nantucket Island. His mother was the novelist Elizabeth Hollister Frost. My trips to his house on Nantucket, built in 1776 on the open moor on the site of the old settlement of Sherburne, together with his mother’s writing, were transformational. A ferry may have taken me to Nantucket, but my truest visit to that island was in the pages of This Side of Land. My response to Frost’s novel, published in 1942, came from my mind’s transplantation of my own childhood visits to the Outer Banks where my imagination had an ocean’s breadth to roam. She evokes not only the landscape, but also its effect on the seafaring men and the women who watched for them from the widow’s walks of their island homes.

“Me-Me always thought it must be plain to everyone that there were two worlds, Here and There,” Frost wrote. “There comes Here differently, not on a wind of joy, but on a blast of grief. And if you are born Here…you listen very young for the sound of grief blowing up from the sea, for the grotesque and terrible wave with its fringe-face, man-fringe, man-spray; for the lone ship laying its bones on the beach, the torn side, the loose entrails (in with the surf, out with the surf….).”

Years later, I lived above Manteo Booksellers on Roanoke Island, where I met writers like Bob Shacochis, who was living on MacNeill’s own Hatteras Island. In “Squirrelly’s Grouper,” Shacochis maps the landscape of Hatteras not with a compass, sextant, and transit, but with an equally accurate measure, the emotional truth of a place:

A fish story is like any other, never about a fish but always about a man and a place. … On the Outer Banks of North Carolina, you can’t pitch a rock in the air in the morning without rock-throwing becoming widespread ruthless competition by the time the sun goes down over Pamlico Sound, and that’s because we go to the sea for a living, and because commercial fishermen think they are God’s own image of male perfection.

In describing what people are up to, Shacochis fills in the map for us, puts us right there, at a specific place in time, in the vernacular, so that how people talk, and how they think, are accurate as any signpost:

Willie Striker has been one to spurn the advancement of radio and the charity of fellow captains, not like the other jackers out there bounced wave to wave on the ocean. They yammer the livelong day, going on like a team of evangelical auctioneers about where the fish aren’t to be found, lying about how they barely filled a hundred-pound box, complaining how there’s too many boats these days on the Banks and too many Yankees on land, in a rage because the boys up in Manteo are fetching a nickel more for yellowfin, and who messed with who, and who’s been reborn in Christ, and who knows that college girl’s name from Rodanthe, and who’s going to get theirs if they don’t watch out.

Another writer who’s spent time on the Outer Banks, hiring out on Wanchese trawlers that bump bottom on their way through Oregon Inlet to the ocean beyond, is Mark Richard. His novel Fishboy is an incantation. Never mind if you’ve never shoveled ice pink with your own blood in the hold of a trawler, or fancifully, tried to sleep in an osprey nest. He will take you there:

Late that night, to escape the rising water, I shimmied up a fishhouse drainpipe and crawled into a vacant osprey nest. It was a saucer-shaped work of knitted twigs and sticks twisted atop the drainspout. Bird lice bit my flesh and it was a rank place of chalky dung and hatchlings’ crust. It was a good roost from which to watch the sleeping tattooed man and to wait for any ship that would come up our tidal creek.

In such hands as these, place becomes a kind of literary impressionism. The landscape comes alive. It’s what any writer strives to accomplish.

And so, to take you back to my nocturnal swim on a moonless night, in my novel Between Tides, I paint over my own experience to reveal a different landscape. Or is it? “There in the black water jeweled with topaz for a thousand ringed fingers, he grasped my wrists and swung me in a wide circle, my hair swooning outward, a sheath of gold that continued to shimmer long after he had folded me back in, our limbs leaving their imprint luminous on the dark eddies.”

The dirty dishes are gone, and so are the blue Dietz lanterns. Husband gone, guests gone, leaving just me and my imagination. I wrote much of my novel on that same pier. The words, they form a picture in my mind—and if I’ve done my job, in yours as well—a Rorschach image imbued with our own experience. In this way, writer and reader’s minds merge. The landscape is complete. 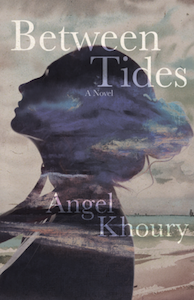 Angel Khoury’s Between Tides is available now via Dzanc Books.

Angel Khoury has lived on North Carolina’s Outer Banks for more than 40 years. She is the author of Between Tides, Dzanc Books, 2021. 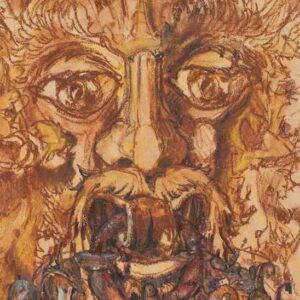