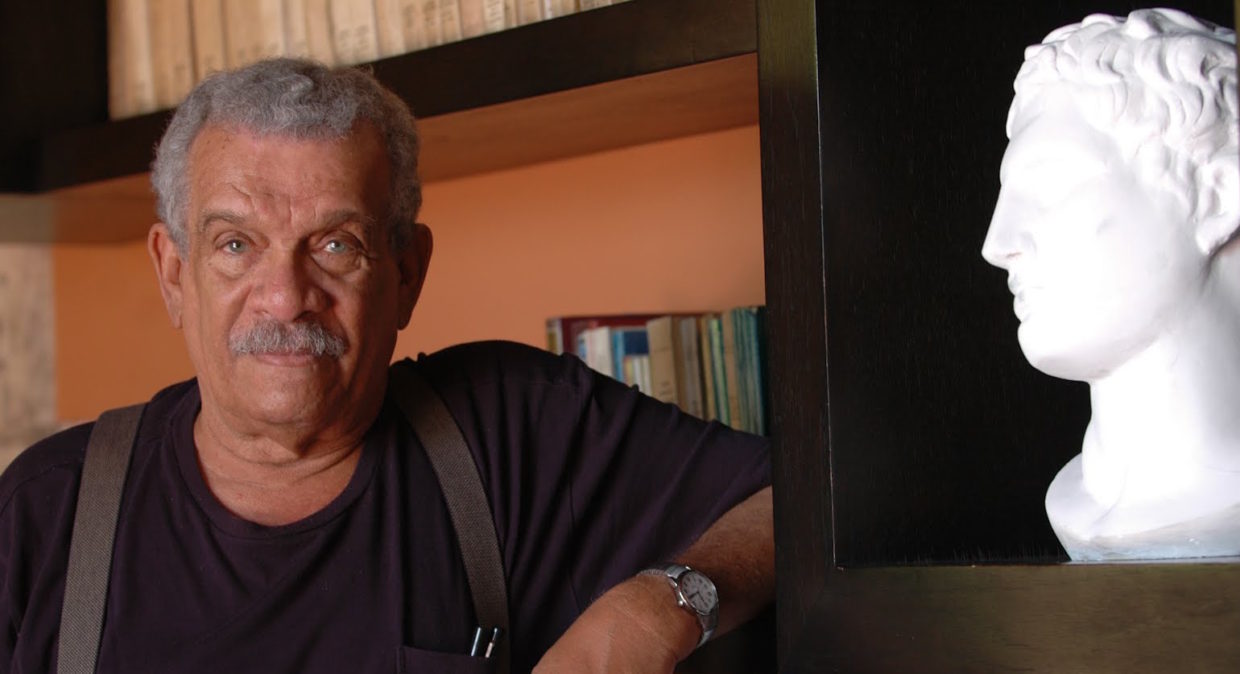 "prejudice is an inferior form of thinking"

“The future happens,” says the philosopher in Derek Walcott’s stage retelling of Homer’s Odyssey, “No matter how much we scream.” Walcott died on Friday at the age of 87—and instead of screaming, I’m feeling grateful towards this great poet, playwright and thinker, who wrote and spoke at length about language, conflicting identities, the place of the writer in America and elsewhere, and his lifelong religion of poetry. He was a teacher both in literal classrooms and in the world, that is, in his very state of being, and will be remembered as one of the most influential and important writers of the modern era. To help us all move forward with more Walcott in our brains, I’ve collected below a few of his teachings and comments on the job of the writer and the sublime art of poetry.

On poetry as prayer:
I have never separated the writing of poetry from prayer. I have grown up believing it is a vocation, a religious vocation. What I described in Another Life—about being on the hill and feeling the sort of dissolution that happened—is a frequent experience in a younger writer. I felt this sweetness of melancholy, of a sense of mortality, or rather of immortality, a sense of gratitude both for what you feel is a gift and for the beauty of the earth, the beauty of life around us. When that’s forceful in a young writer, it can make you cry. It’s just clear tears; it’s not grimacing or being contorted, it’s just a flow that happens. The body feels it is melting into what it has seen. This continues in the poet. It may be repressed in some way, but I think we continue in all our lives to have that sense of melting, of the “I” not being important. That is the ecstasy. … It’s gratitude, really. The more of that a poet keeps, the more genuine his nature. (From The Paris Review interview with Edward Hirsch, 1986)

On “originality”:
It proves that the truest writers are those who see language not as linguistic process but as a living element; it more closely demonstrates the laziness of poets who confuse language with linguistics and with archaeology. It also annihilates provincial concepts of imitation and originality. Fear of imitation obsesses minor poets. But in any age a common genius almost indistinguishably will show itself, and the perpetuity of this genius is the only valid tradition, not the tradition which categorizes poetry by epochs and by schools. We know that the great poets have no wish to be different, no time to be original, that their originality emerges only when they have absorbed all the poetry which they have read, entire, that their first work appears to be the accumulation of other people’s trash, but that they become bonfires, that it is only academics and frightened poets who talk of Beckett’s debt to Joyce. (From “The Muse of History,” collected in What the Twilight Says)

On ritual and the importance of the poem over the poet:
Any serious attempt to try to do something worthwhile is ritualistic. I haven’t noticed what my own devices are. But I do know that if one thinks a poem is coming on—in spite of the noise of the typewriter, or the traffic outside the window, or whatever—you do make a retreat, a withdrawal into some kind of silence that cuts out everything around you. What you’re taking on is really not a renewal of your identity but actually a renewal of your anonymity, so that what’s in front of you becomes more important than what you are. Equally—and it may be a little pretentious-sounding to say it—sometimes if I feel that I have done good work I do pray, I do say thanks. It isn’t often, of course. I don’t do it every day. I’m not a monk, but if something does happen I say thanks because I feel that it is really a piece of luck, a kind of fleeting grace that has happened to one. (From The Paris Review interview with Edward Hirsch, 1986)

At this period of my life and work, I think of myself in a way as a carpenter, as one making frames, simply and well. I’m working a lot in quatrains, or I have been, and I feel that there is something in that that is very ordinary, you know, without any mystique. I’m trying to get rid of the mystique as much as possible. And so I find myself wanting to write very simply cut, very contracted, very speakable, and very challenging quatrains in rhymes. Any other shape seems ornate, an elaboration on that essential cube that really is the poem. So we can then say the craft is as ritualistic as that of a carpenter putting down his plane and measuring his stanzas and setting them squarely. And the frame becomes more important than the carpenter. (From The Paris Review interview with Edward Hirsch, 1986)

On poetry as fragmentation:
Break a vase, and the love that reassembles the fragments is stronger than that love which took its symmetry for granted when it was whole. The glue that fits the pieces is the sealing of its original shape. It is such a love that reassembles our African and Asiatic fragments, the cracked heirlooms whose restoration shows its white scars. This gathering of broken pieces is the care and pain of the Antilles, and if the pieces are disparate, ill-fitting, they contain more pain than their original sculpture, those icons and sacred vessels taken for granted in their ancestral places. Antillean art is this restoration of our shattered histories, our shards of vocabulary, our archipelago becoming a synonym for pieces broken off from the original continent.And this is the exact process of the making of poetry, or what should be called not its “making” but its remaking, the fragmented memory, the armature that frames the god, even the rite that surrenders it to a final pyre; the god assembled cane by cane, reed by weaving reed, line by plaited line, as the artisans of Felicity would erect his holy echo. (From Walcott’s Nobel Lecture, 1992)

On the duty of the writer:
[A] fisherman, say, working on a beach doing his job, may be photographed by a tourist because it’s photogenic to see him working and the Caribbean is extremely photogenic so poverty is photogenic and a lot of people are photographed in their poverty and sometimes it’s kind of exploited. The poverty can be exploited sentimentally in terms of presenting certain images that are good for tourism, you know, a happy native woman holding up something, a smiling waiter, all of those sort of clichés that one has to avoid, I think it’s almost a duty of the writer to protect the people from that kind of cliché exploitation of them. (From an interview with Simon Stanford, 1992)

On what it means to be a great writer:
The best poetry in The Tempest, apart from Prospero’s speech at the end, is spoken by Caliban. And this is where the greatness of Shakespeare is. This is real greatness in the sense that he doesn’t make Caliban talk like Tarzan, or some ape, or he doesn’t make him grunt. He gives him the greatest language, the most musical language, in the mouth of someone who says, “You taught me language, and my profit on it is to learn how to curse.” Because he doesn’t only curse. He says beautiful things like, “Be not afraid, the isle is full of noises.” That’s his speech, you know. I think there is a point now for writers outside the periphery of the idea of empire as language, who look at really great writers and say the really, really great writer is someone beyond prejudice. And for truly great surviving writers—Shakespeare; Joyce, I think, had that kind of mind—prejudice is an inferior form of thinking. So that Caliban, the reason why Caliban speaks this beautiful language is Shakespeare is not being ironic, he simply gives it to him. That this man has learned this language. And what is the process, then, inside Caliban that makes him speak as well as Prospero? Not as well as, in terms of diction, but to render an imagination in language that says, “We have the same imagination.” (From an interview with Bill Moyers, 1988)

One may say: “How can you say that about certain sort of pessimistic poets?” But—I don’t think that there is a great pessimistic poet. I can’t think of a great poet who is a pessimist. You can think of very good poets, and very honest and true poets, and so on. Poets who may end in despair, and so on. But I think that even when these poets are writing, what they’re saying is: “It is something. Some feeling within me”. Right? Whereas, if one condemns man through man’s iniquity—only—then you have something that doesn’t redeem anything.

I’m not saying that the alternative is to be religious. I’m just saying—even if it is a very corny phrase—that life remains a mystery. That death remains a mystery. And if it’s not a mystery, and is simply a brutal extension of a purposeless existence—and that’s putdown—there’s always that thing beyond that that says: Well, you may think so; but that’s not a satisfactory answer, either. A desperate alternative is not to praise so you can save your soul.

What is then that thing that a poet is engaged in? I think that the answer is in the fact that any poet, really, would prefer to be anonymous—and not to have a name. Not even have a style, really. And I think it is just as sacred an occupation as… Whose purpose is… Even a sense beyond religion, in a way. [think that poetry can round a religion—right? Whereas religions don’t discover poetry. I mean—I think poetry can be the beginning of a religion. (From an interview with Luigi Sampietro)

Derek Walcott: Poet of Twilight, Poet of the Caribbean 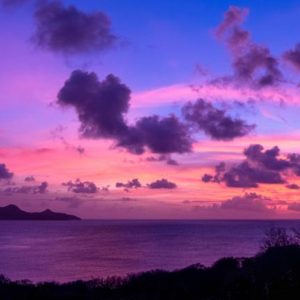 Derek Walcott: Poet of Twilight, Poet of the Caribbean

“The English language is nobody's special property,” Derek Walcott said in an interview with The Paris Review in 1985....
© LitHub
Back to top