On the Past and Future of Morocco's Al-Qarawiyyin Library

In my first month there, Morocco seemed encapsulated by three distinct smells: sweat, spices, and blood. The first arose from the humid heat and crowded streets of the ancient inner cities, the medinas. The second—most notably cumin and cinnamon—came from all the food being cooked outdoors and inside. And however ominous the third may seem, its source was always life-giving: the blood of animals recently slaughtered and butchered in open air as women and men and children walked by, or stopped to haggle over the price of a goat’s foot or a shark head.

These were the smells that engulfed us as we wound our way through the dense streets of Fes el Bali, the oldest walled portion of the city. Our group of American students was being guided by a Moroccan man in a brown djellaba (a type of overcoat), whose voice was nearly drowned out by the surrounding tumult of the market. There were enormous baskets filled with snails, their gray, glistening bodies sliding over the shells of others. Vendors stood behind pyramids of olives, some a forest green, others deep purple. Boxes of dates, stacks of fruits and vegetables, and meats from all types of animals lined the narrow alley. At one point we stopped to take pictures of a camel head, its eyes shut and long lashes drooping. As if it were simply asleep rather than dead.

“Camel is a very tender meat, like beef,” our guide explained. “But with lower cholesterol.”

When Westerners picture Morocco and other parts of the Middle East, these, I think, are the scenes rendered in their brains. The exoticism, the dirtiness, the trill of voices speaking a foreign language. But just as supermarkets say so much and so little about America, this strip of markets in Fes el Bali reflected only a tiny portion of its character. As we worked our way deeper into the heart of the medina, pushing past donkeys with comically large loads and women carrying bags of groceries or clothes, we came to an altogether different vein of activity. Here, off Souk el-Attarin, with metal workers hammering away on their products, came a place we foreigners weren’t allowed to enter. A place called Al-Qarawiyyin, which included a university and a library and a mosque. The library door was closed, of course, but we could peer past the grating of the mosque towards the interior and the university. What were those students learning? Did they go home at night with heads pounding from memorization, fingers ready to write papers?

“And this is the oldest library in use in the world,” the guide said, indicating the closed door at one corner of the square, past a crooked old tree.

Like most writers, I grew up adoring libraries. The smell of them, the orderly layout, the sight of all those spines propped upright and waiting to be read, the feeling of drowning in the vastness of written human experience and still believing I had something to offer. I dreamt of having a library like the one in Beauty and the Beast, where I could ride ladders from one wall to the next. I studied the Library of Alexandria, visited the main branch of the New York Public Library, salivated over the shelves at Trinity College Library in Dublin. My grandmother and my great aunt and my mother-in-law were all librarians; for a while I worked at my local library. I felt immersed in that world, familiar with it. So how could I possibly not have known that Morocco was home to the world’s oldest and longest-functioning library?

Because I was anticipating sweat, and spices, and blood—not books.

To be fair, the Al-Qarawiyyin Library is better known for its manuscripts than its books. It houses one of the country’s two main collections and includes 5,600 titles, more than half of which include multiple copies. The texts include everything from the Muqadimmah, a 14th-century historical treatise by the renowned scholar Ibn Khaldun (previously displayed by the Louvre in Paris), to a 9th-century Quran. Al-Qarawiyyin Library was a hub of intellectualism for hundreds of years following its founding in 859 C.E. all thanks to its founder—Fatima al-Fehri.

The Tunisian immigrant moved with her family to Fes in the mid 9th century. Fatima grew up being educated, along with her sister. When their father died, Fatima used her inheritance to create the library and mosque. It became a center of learning, for centuries providing Morocco with many of its judges and teachers. Women were even allowed to attend lectures that were thought to be of interest. It seems only fitting, given the library’s history, that a Moroccan woman would be asked to lead its restoration.

Aziza Chaouni is an architect who works in Canada and Morocco, and whose family history intertwines with that of the library. Her great-grandfather was a student at al-Qarawiyyin University. He came to the city of Fes from a northern village, riding on the back of a donkey and taking refuge in the library when he couldn’t return home to visit his family. Chaouni herself grew up in Fes, seeing the big library door but not knowing what lay behind it; at the time, the library wasn’t open to the public.

“Of course I was in love with books, so for me it would’ve been a fantastic place to visit,” Chaouni said in an interview with Georgia Tech Library. “As a child I imagined it as a fantastical large space with stacks that would be four stories high. I had the impression that it was only one big space, when actually it is composed of a very intricate set of three courtyard buildings that were each built at a different time” as succeeding generations made additions and modifications.

Those additions made it all the more challenging to conserve the library while also modernizing it. But Chaouni was chosen for her ability to respect the history and acknowledge the present. The renovated library will have much better climate control and high-tech stations for preserving the manuscripts, some of which have been damaged over the years. Best of all, the library will be opened to the public, including a manuscript viewing center.

“When I was young, I was immensely impressed by this young woman (Fatima al-Fehri) who devoted her entire fortune that she inherited and also her entire life to creating a center of knowledge for her city,” Chaouni said. “So when I was asked to rehabilitate this building, I was extremely excited. Me, myself being a woman, asked to rehabilitate a building by a woman.”

Today when I think of Morocco, I still remember the smells of the markets. But I also think of everything else I saw and learned there, and of the women who made such learning possible. Someday I hope to go back. And when I do, my first stop will be al-Qarawiyyin Library in Fes. A city of camel heads and donkeys and tanneries and books.

Lorraine Boissoneault is an Ohio native who currently lives in Chicago. She writers about science, history, and adventure for publications like The Atlantic, Chicago Magazine, Salon, Mental_Floss, JSTOR Daily, and Nautilus. The Last Voyageurs is her first nonfiction book. 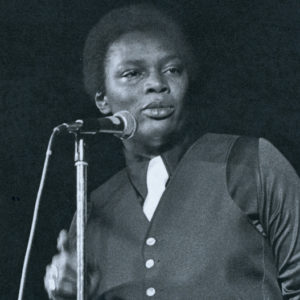 In her writing, Pat Parker developed a fully authentic and revolutionary voice grounded in her experiences growing...
© LitHub
Back to top