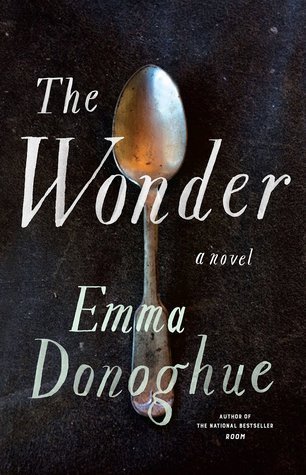 The following is from Emma Donoghue’s novel, The Wonder. Donoghue is a writer of contemporary and historical fiction whose novels include the bestselling The Sealed Letter, Landing, Life Mask, Hood, Stirfry, Room and Frog Music. Her story collections are Astray, The Woman Who Gave Birth to Rabbits, Kissing the Witch, and Touchy Subjects. She also writes literary history, and plays for stage and radio.

When she reached the cabin at nine that night she recognized the moaning chorus of the Rosary: Holy Mary, Mother of God, pray for us now and at the hour of our death, amen.

She let herself in and waited on one of the three-legged stools the Irish called creepies. Like babies, the Catholics, babbling as they squeezed their beads. Sister Michael’s head was up, at least, eyes on the little girl, but was she concentrating on her or on the prayers?

Anna was in her nightdress already. Lib watched her lips shaping the words over and over: Now and at the hour of our death, amen. She trained her gaze in turn on the mother, the father, the poor cousin, wondering which of them was plotting to evade her scrutiny tonight.

“Sister, you’ll stay for a cup of tea with us?” asked Rosaleen O’Donnell afterwards.

Anna’s mother was flaunting her preference for the nun, Lib decided. Of course they’d like Sister Michael, familiar and inoffensive.

Rosaleen O’Donnell was using a little rake to tidy the embers into a circle. She set down three fresh sods like spokes in a wheel and sat back on her heels, crossing herself. Once the fresh turf flared up, she scooped ash from a bin and shook it over the flames, damping them down.

Lib had a dizzying sense that time could fall into itself like the embers. That in these dim huts nothing had changed since the age of the Druids and nothing ever would. What was that line in the hymn they’d sung at Lib’s school? The night is dark, and I am far from home.

While the nun was doing up her cloak in the bedroom, Lib asked her about the day.

Three spoonfuls of water taken, according to Sister Michael, and a short walk. No symptoms any better or worse.

“And if you’d seen the girl engage in any surreptitious behaviour,” asked Lib in a whisper, “I hope you’d consider this a relevant

fact and mention it to me?”

It was maddening; what could they be missing? Still, the girl couldn’t hold out much longer. Lib would catch her out tonight, she was almost sure of it.

She chanced saying one more thing. “Here’s a fact. Manna from heaven,” she murmured in Sister Michael’s ear, “that’s what I heard Anna tell a visitor this morning, that she’s living on manna from heaven.”

The nun gave another tiny nod. Merely acknowledging what Lib had said, or affirming that such a thing was quite possible?

Sister Michael furrowed her forehead. “The Book of Exodus, I believe.”

“Thank you.” Lib tried to think of some more conversational note to end on. “It’s always intrigued me,” she said, letting her voice rise, “why you Sisters of Mercy are called walking nuns.”

“We walk out into the world, you see, Mrs. Wright. We take the usual vows of any order — poverty, chastity, obedience — but also a fourth, service.”

Lib had never heard the nun say so much before. “What kind of service?”

Anna broke in: “To the sick, the poor, and the ignorant.”

As Sister Michael left the room, Rosaleen O’Donnell came in but didn’t say a word. Was she refusing to speak to the Englishwoman now, after this morning’s spat about the visitors? She turned her back on Lib, bending to wrap the tiny girl in her arms. Lib listened to the whispered endearments and watched Anna’s thick hands, dangling at her sides, empty.

Then the woman straightened up and said, “Let you sleep well tonight, pet, and may only the sweetest of dreams come to your bed.

Angel of God, my guardian dear, to whom God’s love commits me here.” Dipping again, her forehead almost touching the child’s. “Ever this night be at my side, to light and guard, to rule and guide.”

“Amen.” The girl joined in on the last word. “Good night, Mammy.”

After a few minutes, the slavey came in with an unshaded lamp and set it down. She struck a match and lit the wick till it flared, then crossed herself. “There you go, ma’am.”

“That’s a great help, Kitty,” said Lib. The lamp was an old-fashioned thing with a burner like a forked stick inside a conical glass chimney, but its light was snowy white. She sniffed. “Not whale oil?”

This mysterious burning fluid smelled something like turpentine; alcohol in the mix, perhaps.

We must be scavengers in a time of calamity; that line of Miss N.’s came back to Lib now. At Scutari the nurses had had to root through storerooms for chloride of lime, tincture of opium, blankets, socks, firewood, flour, lice combs . . . What they couldn’t find—or couldn’t persuade the purveyor to release—they had to improvise. Torn-up sheets became slings, sacks were stuffed to make tiny mattresses; desperation was the mother of the makeshift.

“Here’s the can, and the lamp scissors,” said Kitty. “After six hours you snuff it and trim off the charred bit and top it up and light the yoke again. And watch out for draughts, the fellow said, or they can shoot soot through the room like a black rain!”

The child was on her knees by the bed, pressing her hands flat together in prayer.

“Good night, pet,” Kitty told her with a wide yawn, and she trudged back to the kitchen.

Lib opened to a new page and took up her metallic pencil.

Her first night shift. She’d never minded working these hours; there was something steadying about the quiet. She made a last pass over the sheets with the flat of her hand. Searching for hidden crumbs had already become routine.

Lib’s eyes fell on the whitewashed wall, and she thought of the dung, hair, blood, and buttermilk mixed into it. How could such a surface ever be clean? She imagined Anna sucking it for a trace of nourishment, like those wayward babies who ate fistfuls of earth. But no, that would stain her mouth, surely. Besides, Anna was never alone anymore, not since the watch had begun. Candles, the girl’s own clothes, pages out of her books, fragments of her own skin—she had no chance to nibble on any of these things unobserved.

Meet Emma Donoghue on her book tour, starting in London on September 15, and ending in Seattle on October 22. 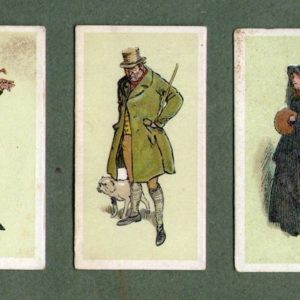 10 Dickensian Character Names Deciphered You have to love Charles Dickens’ knack for naming characters. Who else could have come up with monikers like Mr. Sweedlepipe,...
© LitHub
Back to top