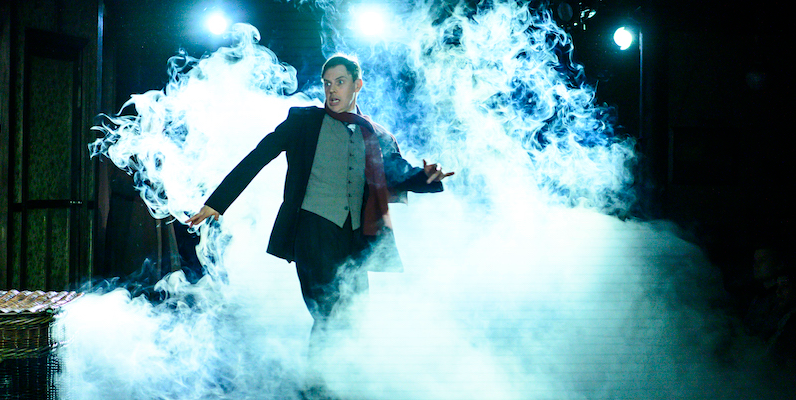 The Woman in Black has come to haunt New York City.

The McKittrick Hotel, already the home to the eerie, theatrical somnambulation Sleep No More, has offered one of its many empty, low-lit crannies to host a second production during this bleak mid-winter season: the West End’s long-running hit The Woman in Black, based on Susan Hill’s 1983 novel of the same name. Watching the production, which is as much about being alive and not, as it is about encountering the oscillating corporeality and ephemerality of the theater space, I couldn’t help but think of a sentence written by the literary scholar Stephen Greenblatt about how to reconcile writing about texts of the distant past: “I began with a desire to speak to the dead.”

How do we encounter figures from the past, and how do we revive them? How do we communicate with beings not physically there to talk back to us—or, how can they talk to us, when they are not there? How do we bring stories to life? The ghost story offers a popular format to exercise (exorcise?) these questions, but the production of the gothic The Woman in Black has some other ideas up its sleeve.

Susan Hill’s novel (sort of a cross between Dracula and The Turn of the Screw) is about a no-nonsense London solicitor who arrives in a small countryside town to settle the estate of a recently deceased elderly recluse. Everyone in the town is afraid of the remote mansion to which he must travel, so he enters it alone. And when he begins to sort through the affairs of the deceased woman, he begins to have terrifying encounters with a malevolent spirit, who materializes as a skeletal young woman wearing a black dress and veil.

Hill’s novel, which is told in the first person (like so many of the Gothic stories it emulates), is concerned with the telling of this fantastic, and horrifying episode. But the play is concerned with something a bit different—how to translate the fundamental conceits of “narration” and “recounting” to a stage environment. Playwright Stephen Mallatratt has resolved this by making his adaptation (written in 1987) primarily about different ways we reanimate the past—through memory, yes, but also through theater.

The play quickly becomes a meditation about the kind of occultish magic that only the theater, where flesh-and-blood bodies are convincingly taken over by other identities, can produce. Arthur Kipps (David Acton), the lawyer who experienced the feverish horrors of sinister Eel Marsh House many years before, has written them down—but instead of publishing them as is, contacts a theater practitioner (Ben Porter) to figure out how to deliver his story orally to a crowd. But Kipps is a nervous performer, and can’t play himself in his own script, so he and the Actor switch roles, with Kipps taking on all the supporting parts and the actor playing his client’s younger self. The Actor, is startled to find that the stuttering Kipps now overcomes his stage fright; his memories of these distinct people are so strong, that he imitates them all flawlessly, and is finally able to, as he wants, “relive it through the telling.”

But the deeper he reanimates his experiences, the more painful it is. And as he grows more confident in his actual performance skills, the more the theater space becomes a kind of a séance, awakening manifestations of other kinds—kinds that the Actor is surprised to encounter but believes to be produced by special effects. Are they? The play, with its copious shadows, ambient shrieks, and sudden thunder-cracks, is content to let us guess which is which, on its many different levels.

In this way, the production reminds us that theater’s most fundamental illusion is its co-opting of its audience, having them accept the phantasmagoria before them as legitimate, or causing them to imagine it on their own. Indeed, the terrifying visions that Kipps encounters as he wanders through the house and along the moors, which are conjured in the space only by the Actor’s commanding performance, often occlude the real audience visually, but are just as chilling as if they had physically appeared. It is impressive how haunting this production actually is, especially given its minimalism: just two actors, barely any set, and no dog to play the dog. Then again, this is a play-within-a play, and the bare-bones stage is the actual setting and very much the entire point: framed under the proscenium, which is lined with a translucent scrim for a curtain, is the alter from which all the magic (theatrical and otherworldly) will be raised.

As the general meditation on empty stages goes: it’s hard to imagine so much could have happened in a space which is so barren. Underscoring this helpfully, is that The Woman in Black first debuted on the West End in 1989 and, much like its eponymous phantom, has not left. How many actors have come and gone in the play’s memory? How many times has the story been shared? Seeing the play is to commune with ghosts of all kinds, at once absent and eternally present in the telling of the tale, for as long as it is told, and even longer as it is remembered.