These three new pairs of poems by Albert Mobilio are rare instances of artistic demolition and poetic erasure aimed inward. Artists and writers have long appropriated materials from the world, including other artists; our fading fad for erasure poetry yet another example. Often, the concept is all that matters and the source material is readily trampled upon. The concept at work here, one is happy to report, is interesting, but not nearly as interesting as the poems themselves—in which each ‘pair’ is a truncated, redacted or reduced, entirely new version (or anti-version) taken from the text above. One thinks of the gorgeous ravages of Rosamond Purcell’s art—where books, dice, herring bones or other primordial bits of natural and manmade materials are set to fester, linger, auto-destruct (the image above is from Purcell’s Bookworm, from W.W. Norton). Yet Mobilio, like Purcell, isn’t after the cheap trick of chic ruins or easy implosion. (For me, the destructive impulse, even as “art,” tires quickly.) Instead, the poet has found a constraint that interrogates the finished original, and demanded from it a lessening, whether sibling or offspring, a sort of mental rhyme (or not) in dissolving form. A patient composure counterbalances the chaos of erosion. So the reader may judge for herself, even as the poet, musically and mysteriously, already has.

The judgment scene was laugh-track time we sought

oral & otherwise scary was the sense that human

touch was nothing more than loud more loudly

its portion divvied out to words so different from

each other you can’t circulate one noun among

toward then turned their faces back the way

they’re made we get the point—the window, the alley,

the criss-cross motion—no one wants to travel

unless the shoulder dips, the hand repeats

whatever hitch-hike works & straight again you

the air for disembodied, snake-shaped sounds,

they fill the auditorium & feeble love

is nothing we can add much to except we can

make lists of what deserves to die & other numbered

see it goes higher up

In the midst of this widely unread

In midst of this widely unread life in the line

outside a washroom where truly we are as hollow

as our own confessions those shaken

out of us by close reading tomes about the middle

ages the sun darkening for a dying pope & wintry

crowns jeweled with groans we wore our sexual

sorrow to warm the indentation left in bed

If you wait long enough songs come they have

momentum that shows itself amid shouting as

the ambulance arrives we called

ourselves skyward rising through bluish haze,

the ignorant mouths their nouns around

The point of philosophy was saving whatever

face we could in this otherwise incurable

dirty with perplexities we strummed slick

smells from our hidden parts the breath glistens

like fresh meat cut, splayed & left for flies we brought

our wrath to perfection so it might finally end

the midst of this

This dancer is out

This dancer is out of step with that one whenever

the mood makes you wish you

weren’t as devout as you are your mental

cracks only visible when close enough to sense

The nightfall was beauty was strange in its hills,

its desolations penciled on scrap paper,

letters to ancestors & you have become over

aware of mouth movements their history

of dirty words the sleepless camera’s

focus pulling back though the actor isn’t pleased

You bring money & show off your face & opposites

attract indifferently but that’s the loneliness

of sand that’s nothing to me & thoughts

by the millions go begging, truly an exalted life

you’re giving yourself to the agitated air,

smug boots & mock sensation: who are your gods,

are they the ones that fight the daytime’s fire

The featured image is from Rosamond Purcell’s Bookworm

Albert Mobilio is the recipient of a Whiting Writers’ Award. His books of poetry include Bendable Siege, The Geographics, Me with Animal Towering, Touch Wood. Games and Stunts, a book of short fictions, is forthcoming from Black Square Editions. He is an assistant professor of literary studies at the New School’s Eugene Lang College and an editor at Bookforum.
Share:

Alain de Botton on the False Promises of Romantic Love

13 Books You Should Read This June 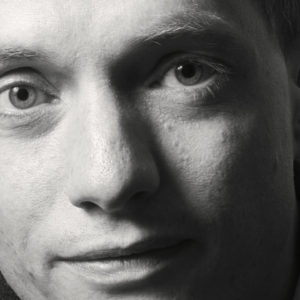 Alain de Botton on the False Promises of Romantic Love In part one of their conversation, Alain de Botton and Paul Holdengraber discuss everything from David Hume to the false...
© LitHub
Back to top