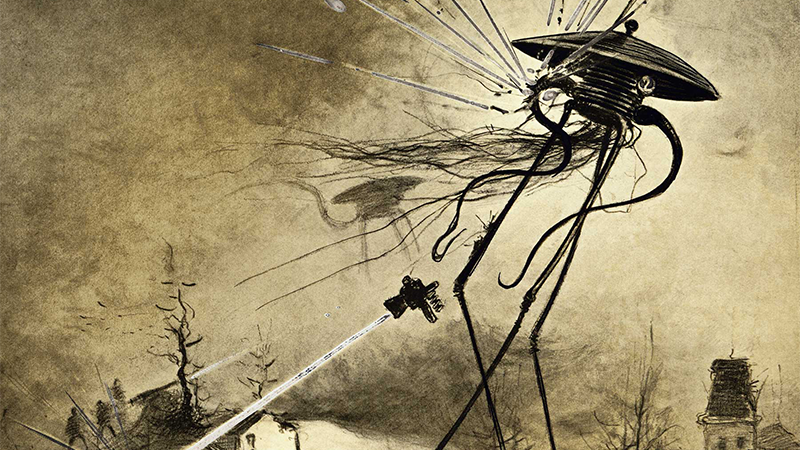 On this very day, in 1938, Orson Wells broadcasted an adaptation of H. G. Wells’ The War of the Worlds. It aired over the Columbia Broadcasting System network as a special Halloween episode.

It begins like this: “We know now that in the early years of the twentieth century, this world was being watched closely by intelligences greater than man’s and yet as mortal as his own.” An alien invasion, descending upon the Earth? Definitely seasonally-appropriate, spooky fun, right? Wrong.

Apparently, listeners who turned in after the announcer explained the project thought it was all real. (Much like when the Lumière brothers first showed a projection of a train, and the audience members thought it was actually heading towards them.) Bouncing between staged interviews with meteorologists and other industry experts, the adaptation was framed as a panicked breaking news broadcast—complete with objects hurtling out of the sky, interrupted calls from fighter plane pilots, and a mass exodus from New York City as citizens fled to safer ground.

There were people who, for that dark hour, thought that the world really was ending. (In fact, there were outraged listeners who thought that he should be sued for “his inhuman instincts and his fiendish joy in causing distress and suffering all over the country.”)

Can you imagine the relief they must have felt when the broadcast came to this beautiful close?

This is Orson Welles, ladies and gentlemen, out of character to assure you that The War of The Worlds has no further significance than as the holiday offering it was intended to be. The Mercury Theatre’s own radio version of dressing up in a sheet and jumping out of a bush and saying Boo! Starting now, we couldn’t soap all your windows and steal all your garden gates by tomorrow night… so we did the best next thing. We annihilated the world before your very ears, and utterly destroyed the C. B. S. You will be relieved, I hope, to learn that we didn’t mean it, and that both institutions are still open for business. So goodbye everybody, and remember the terrible lesson you learned tonight. That grinning, glowing, globular invader of your living room is an inhabitant of the pumpkin patch, and if your doorbell rings and nobody’s there, that was no Martian . . . it’s Halloween.

How I wish all the horrible world-ending news we hear every day could end with a sign-off from Orson Welles, assuring us that the world is not ending, that it’s all merely a simulation.