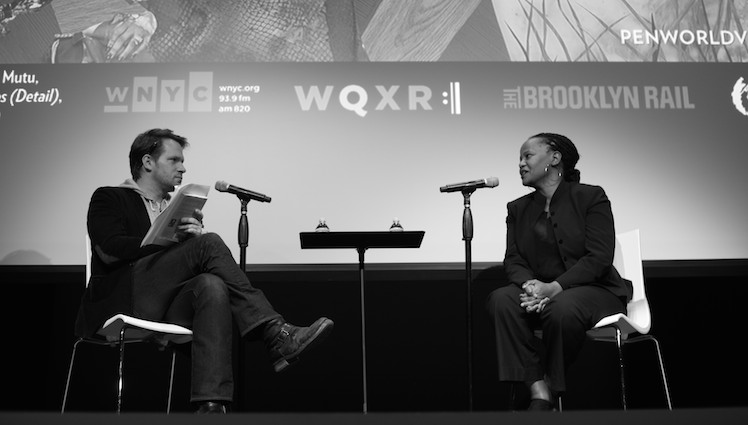 The View of Haiti from Brooklyn

“The notion of a story is not really yours. It’s communal,” Edwidge Danticat said to a packed auditorium at the PEN World Voices Festival. What she was getting at was in the Haitian oral storytelling tradition (and I suppose in all oral storytelling traditions), stories are told and retold… and in the retelling, they evolve, become modified, reordered, like memory itself. And memory and narratives—no matter what their form—drive Danticat.

Danticat and Lit Hub’s John Freeman, who moderated the discussion, explored these other narratives, the “something else” that fosters Danticat’s creativity. A video mélange of traditional Haitian art with accompanying music enveloped the room. Freeman described the artwork as “lush” and “ecstatic.” Indeed, it was. The “brilliant colors, naïve perspective, sly humor” as noted on the titles, complemented the hopeful song that drummed our bellies with sound. “They are saying, Haiti won’t be broken,” Danticat said, partly referring to a post-earthquake Haiti. “A lot of art was destroyed by the earthquake,” she said. Freeman asked her when was it she recognized what she saw on the walls as “art.” “Port-au-Prince was kind of a museum… and at home, we had a picture of Jesus on the wall. And he was white.” We all laughed uncomfortably.

We watched another short film about a Haitian metal sculpture street artist, François André. It is obvious that art illuminates Danticat’s writing, and her enthusiasm for the evening’s topic was evident to all. “Haitian artists paint their dreams. They paint their hopes.” When Danticat looks at a Haitian painting, like a Haitian painter, she doesn’t try to replicate exact things. “It’s my vision of what I see.”

When Danticat was two, her father immigrated to the U.S. Two years later, her mother joined him, leaving her and her brother in the care of her aunt and uncle. Her parents sent letters and she “didn’t realize what a pretty story they were telling” until she arrived in the U.S. at age twelve and figured out the subtext of their words. But the subterfuge was two-sided. “We [she and her brother] went to great pains not to narrate the bad parts our lives.” The result was she didn’t know her parents and they didn’t know her. What then?

After arriving in Brooklyn, Danticat said, “people were calling us boat people and beating us up at school… and I couldn’t believe you could take ten books out of the library!” There, she first read the giants of Haitian literature. “It was a way of going back home. I’m not in Haiti but Haiti’s in me.”

The hour-long discussion was its own mélange, of memory, art, hope, dreams, and erasure. Danticat’s grandfather died in U.S. Immigration custody. The family didn’t know why. They used the Freedom of Information Act (FOIA) to gain access to the documents that might explain. Most of it was redacted with “big black boxes.” The family found out later, he died because his cancer medication had been taken away, his death an unexpected expungement on American soil.

“What are you grateful for?” Freeman asked Danticat. “Life, family, friends… I’m a cliché.” We doubt it. 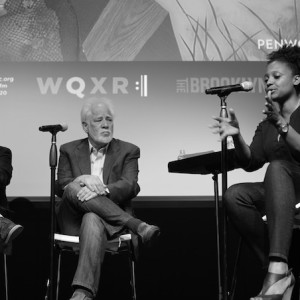 Michael Ondaatje, Luc Sante, and Tracy K. Smith couldn’t answer many of the questions posed to them. They couldn’t pin down...
© LitHub
Back to top