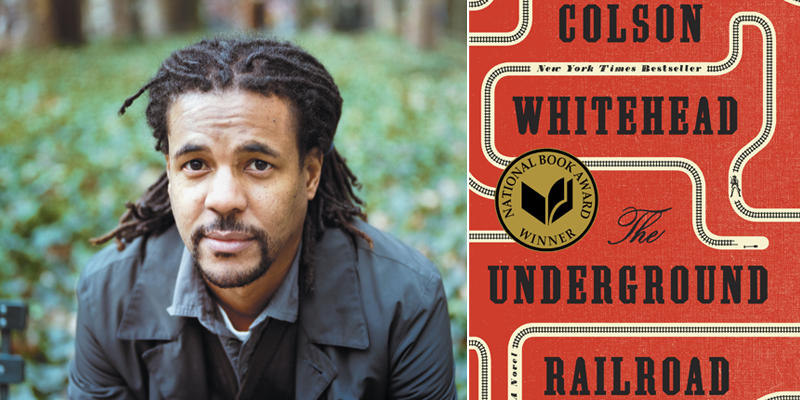 "When you are sold that many times, the world is teaching you to pay attention"

The following is an excerpt from Colson Whitehead’s The Underground Railroad, a finalist for the 2017 PEN/Jean Stein Book Award.

The first time Caesar approached Cora about running north, she said no.

This was her grandmother talking. Cora’s grandmother had never seen the ocean before that bright afternoon in the port of Ouidah and the water dazzled after her time in the fort’s dungeon. The dungeon stored them until the ships arrived. Dahomeyan raiders kidnapped the men first, then returned to her village the next moon for the women and children, marching them in chains to the sea two by two. As she stared into the black doorway, Ajarry thought she’d be reunited with her father, down there in the dark. The survivors from her village told her that when her father couldn’t keep the pace of the long march, the slavers stove in his head and left his body by the trail. Her mother had died years before.

Cora’s grandmother was sold a few times on the trek to the fort, passed between slavers for cowrie shells and glass beads. It was hard to say how much they paid for her in Ouidah as she was part of a bulk purchase, eighty-eight human souls for sixty crates of rum and gunpowder, the price arrived upon after the standard haggling in Coast English. Able-bodied men and child- bearing women fetched more than juveniles, making an individual accounting difficult.

The Nanny was out of Liverpool and had made two previous stops along the Gold Coast. The captain staggered his purchases, rather than find himself with cargo of singular culture and disposition. Who knew what brand of mutiny his captives might cook up if they shared a common tongue. This was the ship’s final port of call before they crossed the Atlantic. Two yellow-haired sailors rowed Ajarry out to the ship, humming. White skin like bone.

The noxious air of the hold, the gloom of confinement, and the screams of those shackled to her contrived to drive Ajarry to madness. Because of her tender age, her captors did not immediately force their urges upon her, but eventually some of the more seasoned mates dragged her from the hold six weeks into the passage. She twice tried to kill herself on the voyage to America, once by denying herself food and then again by drowning. The sailors stymied her both times, versed in the schemes and inclinations of chattel. Ajarry didn’t even make it to the gunwale when she tried to jump overboard. Her simpering posture and piteous aspect, recognizable from thousands of slaves before her, betrayed her intentions. Chained head to toe, head to toe, in exponential misery.

Although they had tried not to get separated at the auction in Ouidah, the rest of her family was purchased by Portuguese traders from the frigate Vivilia, next seen four months later drifting ten miles off Bermuda. Plague had claimed all on board. Authorities lit the ship on fire and watched her crackle and sink. Cora’s grandmother knew nothing about the ship’s fate. For the rest of her life she imagined her cousins worked for kind and generous masters up north, engaged in more forgiving trades than her own, weaving or spinning, nothing in the fields. In her stories, Isay and Sidoo and the rest somehow bought their way out of bondage and lived as free men and women in the City of Pennsylvania, a place she had overheard two white men discuss once. These fantasies gave Ajarry comfort when her burdens were such to splinter her into a thousand pieces.

The next time Cora’s grandmother was sold was after a month in the pest house on Sullivan’s Island, once the physicians certified her and the rest of the Nanny’s cargo clear of illness. Another busy day on the Exchange. A big auction always drew a colorful crowd. Traders and procurers from up and down the coast converged on Charleston, checking the merchandise’s eyes and joints and spines, wary of venereal distemper and other afflictions. Onlookers chewed fresh oysters and hot corn as the auctioneers shouted into the air. The slaves stood naked on the platform. There was a bidding war over a group of Ashanti studs, those Africans of renowned industry and musculature, and the foreman of a limestone quarry bought a bunch of pickaninnies in an astounding bargain. Cora’s grandmother saw a little boy among the gawkers eating rock candy and wondered what he was putting in his mouth.

Just before sunset an agent bought her for two hundred and twenty-six dollars. She would have fetched more but for that season’s glut of young girls. His suit was made of the whitest cloth she had ever seen. Rings set with colored stone flashed on his fingers. When he pinched her breasts to see if she was in flower, the metal was cool on her skin. She was branded, not for the first or last time, and fettered to the rest of the day’s acquisitions. The coffle began their long march south that night, staggering behind the trader’s buggy. The Nanny by that time was en route back to Liverpool, full of sugar and tobacco. There were fewer screams belowdecks.

You would have thought Cora’s grandmother cursed, so many times was she sold and swapped and resold over the next few years. Her owners came to ruin with startling frequency. Her first master got swindled by a man who sold a device that cleaned cotton twice as fast as Whitney’s gin. The diagrams were convincing, but in the end Ajarry was another asset liquidated by order of the magistrate. She went for two hundred and eighteen dollars in a hasty exchange, a drop in price occasioned by the realities of the local market. Another owner expired from dropsy, whereupon his widow held an estate sale to fund a return to her native Europe, where it was clean. Ajarry spent three months as the property of a Welshman who eventually lost her, three other slaves, and two hogs in a game of whist. And so on.

Her price fluctuated. When you are sold that many times, the world is teaching you to pay attention. She learned to quickly adjust to the new plantations, sorting the nigger breakers from the merely cruel, the layabouts from the hardworking, the informers from the secret-keepers. Masters and mistresses in degrees of wickedness, estates of disparate means and ambition. Sometimes the planters wanted nothing more than to make a humble living, and then there were men and women who wanted to own the world, as if it were a matter of the proper acreage. Two hundred and forty-eight, two hundred and sixty, two hundred and seventy dollars. Wherever she went it was sugar and indigo, except for a stint folding tobacco leaves for one week before she was sold again. The trader called upon the tobacco plantation looking for slaves of breeding age, preferably with all their teeth and of pliable disposition. She was a woman now. Off she went.

She knew that the white man’s scientists peered beneath things to understand how they worked. The movement of the stars across the night, the cooperation of humors in the blood. The temperature requirements for a healthy cotton harvest. Ajarry made a science of her own black body and accumulated observations. Each thing had a value and as the value changed, everything else changed also. A broken calabash was worth less than one that held its water, a hook that kept its catfish more prized than one that relinquished its bait. In America the quirk was that people were things. Best to cut your losses on an old man who won’t survive a trip across the ocean. A young buck from strong tribal stock got customers into a froth. A slave girl squeezing out pups was like a mint, money that bred money. If you were a thing—a cart or a horse or a slave—your value determined your possibilities. She minded her place.

Finally, Georgia.  A representative of the Randall plantation bought her for two hundred and ninety-two dollars, in spite of the new blankness behind her eyes, which made her look simpleminded. She never drew a breath off Randall land for the rest of her life. She was home, on this island in sight of nothing.

Cora’s grandmother took a husband three times. She had a predilection for broad shoulders and big hands, as did Old Randall, although the master and his slave had different sorts of labor in mind. The two plantations were well-stocked, ninety head of nigger on the northern half and eighty-five head on the southern half. Ajarry generally had her pick. When she didn’t, she was patient.

Her first husband developed a hankering for corn whiskey and started using his big hands to make big fists. Ajarry wasn’t sad to see him disappear down the road when they sold him to a sugar-cane estate in Florida. She next took up with one of the sweet boys from the southern half. Before he passed from cholera he liked to share stories from the Bible, his former master being more liberal-minded when it came to slaves and religion. She enjoyed the stories and parables and supposed that white men had a point: Talk of salvation could give an African ideas. Poor sons of Ham. Her last husband had his ears bored for stealing honey. The wounds gave up pus until he wasted away.

Ajarry bore five children by those men, each delivered in the same spot on the planks of the cabin, which she pointed to when they misstepped. That’s where you came from and where I’ll put you back if you don’t listen. Teach them to obey her and maybe they’ll obey all the masters to come and they will survive. Two died miserably of fever. One boy cut his foot while playing on a rusted plow, which poisoned his blood. Her youngest never woke up after a boss hit him in the head with a wooden block. One after another. At least they were never sold off, an older woman told Ajarry. Which was true—back then Randall rarely sold the little ones. You knew where and how your children would die. The child that lived past the age of ten was Cora’s mother, Mabel.

Ajarry died in the cotton, the bolls bobbing around her like whitecaps on the brute ocean. The last of her village, keeled over in the rows from a knot in her brain, blood pouring from her nose and white froth covering her lips. As if it could have been anywhere else. Liberty was reserved for other people, for the citizens of the City of Pennsylvania bustling a thousand miles to the north. Since the night she was kidnapped she had been appraised and reappraised, each day waking upon the pan of a new scale. Know your value and you know your place in the order. To escape the boundary of the plantation was to escape the fundamental principles of your existence: impossible.

It was her grandmother talking that Sunday evening when Caesar approached Cora about the underground railroad, and she said no.

This time it was her mother talking. 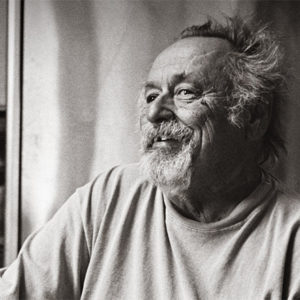 In November of 2003, less than a month before his 66th birthday, the poet and writer Jim Harrison—who died last March at the age of 79—left...
© LitHub
Back to top