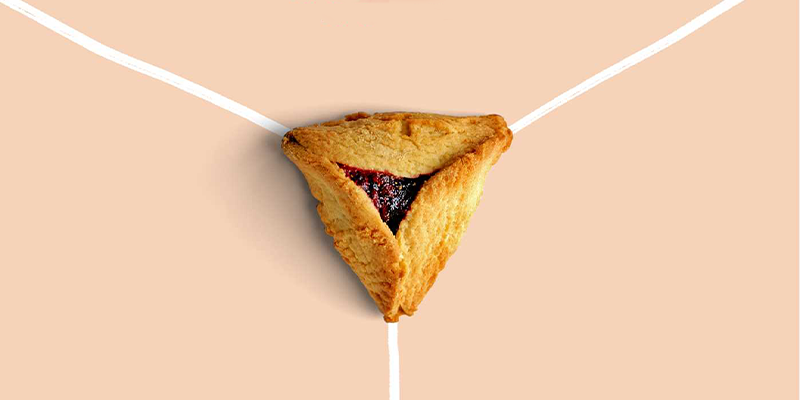 Felicia Berliner on the Line Between Tradition and Transgression

What’s in the middle? A good book jacket reveals something of the inside, and hints at more still hidden. The cover of my debut novel, Shmutz, features a strategically placed hamantaschen, a triangle-shaped cookie eaten on the Jewish holiday of Purim (which falls on March 16-17 this year). On a peachy-beige background with three white lines that evoke thighs and a crotch, sometimes a cookie is not just a cookie. This one has an open center, traditionally filled with poppyseed paste (mohn, in German) in a pastry pocket (tasche): a mohn-tasche, or hamantaschen.

“Why did you show me that?” my friend protested when I showed him the book cover. “Now I’ll never be able to look at a hamataschen without seeing a vagina!”

The hamantaschen cover is a Rohrshach, revealing people in two camps: those who love it and those who find it embarrassing. Some of us thought all along that a hamantaschen was quite vulva-esque. The cover is a kind of affirmation, a knowing wink.

This anatomical resemblance may not be accidental. Susan Schnur’s herstory of hamantaschen calls them “contemporary sacred vulva cakes.” Arielle Kaplan also tracks the lineage of the “poppy pockets” that may have originated as fertility cakes baked in devotion to Ishtar, the Babylonian goddess of sex, fertility, war and justice, who was later personified as Esther, the protagonist of the Purim story who becomes queen and saves the Jewish people from destruction. What’s in the middle, of the story and the cookie—half-hidden and half-revealed—is a woman’s sexuality.

I’ve never made a perfect hamantaschen, but who has? That “homely” look, as a friend called it, is part of their joy; you can sense the presence of the hands that shaped the dough, inviting your hands (and lips) to follow suit.

And what could be more homely than the lovely, plump vulva cookie: each one a shape like no other, the hinge at the top from whence the folds flow, the juicy, beckoning and unknowable dark hole at the center, asking for a finger or a tongue. Asking to be explored.

As to be expected with any upstanding Jewish food, there are rules and recipes—tradition!—with explicit instructions on How to Hamantaschen, which inspired in me a certain desire to… break the rules. The ones I grew up eating were made with margarine or other nondairy fat (my grandma always had a few tubs of Crisco around for her pareve baking), so my first deviation from tradition was using a butter-based recipe for the pastry. What’s wrong with butter? Nothing, except that kosher-keeping Jews don’t eat it with meat, traditionally waiting six hours after any fleishigs, and no one wants to wait six hours for their after-dinner sweets. I love the buttery pastry, especially zinged up with orange or lemon zest and sometimes orange juice.

The thingness of the hamantaschen is in its structure, the triangle and its corners, the tension between boundaries on three sides and the middle that threatens to overflow.

I didn’t stop at tampering with the dough; next I decided to shift gears on the filling from sweet to salt.

I’m certainly not the first to innovate savory hamantaschen. There are sweet-potato-parmesan or tomato-beef recipes from Leah Koenig’s Modern Jewish Cooking. Empanadas and calzones, pocket pastry traditions from other cultures, inspired Koenig to create savory hamantaschen. But those are sealed—the dough is not designed as a peep show for the filling! Hamantaschen are the crotchless panties of the cookie world, showing off a juicy jelly center while keeping a little fabric folded over the edges.

How about a bacon hamantaschen? Yup, I made that. Think pig in a blanket but sweeter, a triangle of dough instead of a tube. I fried the bacon, then chopped it and let it cool before I centered the bits in small circles of dough and folded the three sides over the illicit cargo. The bacontaschen tasted divine right out of the oven. The super-crispy bits, like crystal bacon, shards of spice in hot, sweet pastry. They didn’t last long enough for me to tell you what they taste like at room temperature.

While the bacontaschen takes the prize for forbidden flavor, I’ve circled back to more traditional triangles. I still have a sweet spot for the sweet spot: Nutella, with or without bittersweet chocolate chips, with or without walnuts. And my all-time favorite, Bonne Maman orange marmalade with threads of bitter orange peel that I mix with high-cacao, high-quality dark chocolate chips, so the sugar of the preserves is cut by the bitterness of the cacao and the tart zest in my dough—yum.

In a bacontaschen, is transgression the key ingredient?

Using vegetable oil for non-dairy dough and beef bacon, I made the bacontaschen in my own brand of kosher (not kosher enough for some, freakishly kosher for others). Technically, if not spiritually, my bacontaschen was kosher, nudging the boundaries of what’s acceptable rather than hardcore traife. But I didn’t make them to please anyone outside my home. I didn’t want approval. As a former yeshiva girl, I have plenty of stick-it-to-the-rabbi spirit.

Yet that isn’t the whole of it for me. The transgression is also a way to encounter tradition. The bacontaschen (re)connects me to G-d and the mystical divine, to the rabbis and their rules. And to a sense of community with so many people marking Purim on this day: the Jews alive and doing it and the Jews murdered by the Nazis who used to do it and the Jews before them who did it. My relatives mixed into all those camps.

In the forbidden frisson of the bacontaschen I taste the stories of the women in the Book of Esther. Yes, the bacontaschen tastes like the women of Purim. It tastes like Vashti defying the king, saying hell no, I won’t come naked to your party. It tastes like Queen Esther carefully, craftily hosting a series of banquets for two men, her king and her arch enemy, her husband and her would-be murderer. Vashti was killed for disobeying the king, but her defiance sets the story in motion, her self-possession the big sister to Esther’s courage. The spicy, salty flavor holds all the uncertainty of Queen Esther’s plan, her wait for the perfect moment. The bacontaschen conjures the upheaval, the plot twist at the end, when King Ahasuerus asks, “Who is he and where is he?” and Esther accuses “this evil Haman!”—revealing the precarity of her life as a Jew as she unmasks Haman and brings him to justice. This is the sweet and savory dream: to name those who wish us harm, to have the power of the state behind us when we call for justice, instead of the other way around, the state’s power used to quash the innocent.

From poppy to bacon, sweet to savory, the central ingredient cannot be discovered on any recipe. The thingness of the hamantaschen is in its structure, the triangle and its corners, the tension between boundaries on three sides and the middle that threatens to overflow. I’ve made plenty hamantaschen of this ilk, oozy burnt corners, the bottom not so much a dough boat as the low water mark of a middle that would not be contained, the middle becoming the bottom of the bottom, flavors that will not part, the mixing of items that are supposed to stay separate, compartmentalized, and won’t. The jam that burns bitterness into its own sweet. And this is where the bacontaschen gets built: in the elusive memory or illusion-memory of a childhood hamantaschen so perfect it renders all others as lesser creations.

There is no perfect hamantaschen. The homelier the better, I say.

In fact, the Platonic form of hamantaschen does not exist because when I grew up no one put in chocolate, or tomato-beef, or bacon. Always I was praying for chocolate in the mysterious dark center and biting into the despicable gluey prune, or the grainy poppy. I made do with apricot, cheerful at least, and still I wanted them then, and still I want to give you one now, the hamantaschen that will change your life, the hamantaschen that will finally make you understand why anyone would cherish this homely mess of a cookie.

There is no perfect hamantaschen. The homelier the better, I say. Like the messy story of a real woman. If you come across a perfect-looking hamantaschen, a machine-made isosceles, keep your expectations low. It will not taste good. A mass-produced hamantaschen is guaranteed to have all the flavor of sugary cardboard around colored rubber band. It may still have some Jew-Proustian madeleine value, but generally speaking, this item is Not Worth The Calories. If you can find hamantaschen with uneven pinches and the riffle of fingerprints baked into the dough—those are the best. Homely. Home-made. Haimish. Welcome home.

A few friends have asked for the bacontaschen recipe. But I cannot give that. Think about it: a recipe for breaking the rules. A conundrum. Anathema to tradition-breakers everywhere.

Besides, I have no idea how it would taste for anyone else. Maybe bacon simply tastes like bacon in your house, not like what is forbidden. Maybe beef bacon is a pale imitation of pig bacon, with none of the smoky fatty intonations of pig. A pale rebellion. A kosher rebellion! Just how revolutionary can that be? Not very, perhaps.

But maybe you’ll be inspired to one-up me, to dip a finger in your favorite filling and have a lick.

Felicia Berliner is a writer in New York City. Her debut novel, Shmutz, will be published by Simon & Schuster on July 19, 2022. www.feliciaberliner.com 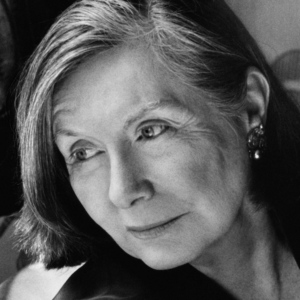 Image courtesy of Marion Ettlinger. Maureen Howard, an author of adventurous fiction and a prize-winning memoir, and an esteemed...
© LitHub
Back to top