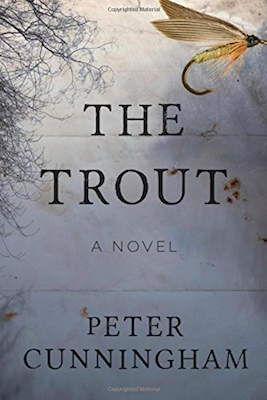 The following is from Peter Cunningham’s novel, The Trout. Alex receives a trout fly in the mail, with no message and no return address. It stirs a fear that he is being stalked after the publication of his most recent book, and it awakens in him deeply buried, inchoate memories from his childhood in Ireland. It also evokes the guilt that he may have murdered a man. Peter Cunningham is an award-winning novelist, who won the Prix de l’Europe and the Prix Caillou.

Trout tend to rise according to the stages being followed by hatching flies and aquatic organisms. If fish are bulging and darting in weeds and shallows but not breaking the surface, they are usually snatching at nymphs in mid-water. The next stage is when the fish start taking duns on the surface and the third stage is when they go for the spinners.

The object of the fly fisherman is to use flies that mimic each of these stages.

The waiting room is overheated. Every so often I receive a report from the management company into whose bank account I pay a sum each month. The last report I received spoke of “reduced mobility.” A large young woman in a white uniform hastens in and introduces herself as Mary.

“You must be exhausted.”

Nurse Mary has a file out, and now, sitting opposite me, begins to go through it attentively. There is some purpose to her that is external to the file, as if the file is a prop. Is he dead? Imagine if he had died even as I was flying here. The dead take away such secrets with them. The nurse looks up.

“Your father is well. He is fundamentally in excellent health for a man of ninety-one. We’ll be all lucky to be as good as Paddy, if we get that far.”

“His mobility is reduced.”

“No more than you’d expect. He sees the physio twice a week.”

“Oh, yes, he can still walk—but we walk with him.”

“Paddy is a very kind man. He is our most long-standing resident.”

What is this woman trying to tell me? Sadness colours the edges of her attitude, and I suddenly understand. Nurse Mary is sad, not for the doctor, but for me. She sighs.

When a fish refuses a fly, it can be either because the fly is the wrong size, or has been poorly presented, or because the fish has noticed something that has alerted him to danger.

On most summer nights the doctor went down along the river with Father McVee, the new curate. The priest was tall and broad, with thick black hair and soaring eyebrows that reminded Mrs. Tyrrell, our housekeeper, of Clark Gable, she once whispered to me, when the doctor was not listening.

No other person can land such a blow on me; but, then, it has always been so. Nurse Mary’s wincing expression conveys her sympathy.

“I did ring your Canadian number, but you’d left. I didn’t want to leave a message.”

“Perhaps he’s not fit to make such a decision.”

“Who knows what he’s thinking? But he has his rights too. We can’t force him.”

He has rights but he also has responsibilities.

“I want you to give him something.” From my pocket I take out my book. “I wrote this. He would like it, I think.”

“Oh!” The nurse becomes temporarily unbalanced by this unexpected development. “You’re a writer.”

“That’s wonderful. Sulphur by Alex Smyth. Is it a novel?”

“Yes. It will have special meaning for my father. It’s about a father and son in Ireland. Their relationship.”

“Oh, my goodness, I never thought you were a writer.” Her eyes are suddenly a nest of clichés. “I’m sorry, but are you famous?”

“Not at all, but I’d be most grateful if you could give him the book. I’ll stay here.”

As she leaves the room, looking back over her shoulder, I go to the table by the window where she has put down her file. dr. patrick smyth, saint anne’s. next of kin: alex smyth, bayport, lake muskoka, ontario, canada. I open it and thumb through daily charts of medical jargon and records of bowel movements. Blood type and medication regime. Diet. Exercise and physiotherapy. My telephone number.

I expected his first refusal, since no other course was likely, given the last time. But throughout my childhood the doctor had prided the written word above all else, and urged me to do the same. Now I have written a book. Outside, a slow soft rain slants over the green garden. White seats stand out forlornly. I am ever sucked back to this climate, to this region and its people.

She is shaking her head, because she doesn’t want me to be hurt a second time.

Without warning, my legs give. I’m on one knee.

“Just take it easy for a minute.”

“I told him he was being silly,” she says. “I’m sorry. There is nothing more I can do.”

The book is on the floor between my feet. The only review I really crave is the one I’m never going to get. I want him to be as caught up in the reading as I was in the writing; but therein lies the flaw. I wrote the book not to tell the truth but to please him.

She becomes happily flustered again, fumbling out a pen and spelling out her surname. Signing the title page, I add the date, hand her the book and leave the room.

With the heel of my hand I ram in green double doors to my right.

The air in the corridor is stiff with floor wax. Elderly women in pink dressing gowns gape. At the end of the hallway there is a sign: saint anne’s.

The doctor was slightly built and spry. He wore collar and tie, tweed waistcoat with jacket and matching plus-fours—trousers gathered below the knee, the lower leg clad in a ribbed green stocking—the feet in stout brown brogues. A small, silky moustache ran across his top lip, like a caterpillar.

Sometimes, when he had to leave the car in order to open the gate to a farm, he would spring from nowhere into my vision, thumbs in his ears, his hands spread out to make horns.

I loved these impromptu displays of affection, for they swept away my doubts about the doctor and burnished the love that always lay waiting within me. I had come to accept that closeness was a difficulty for him. Unlike the fathers of other boys, he no longer had a wife, and men without wives were different. Mrs. Tyrrell, when the doctor was not looking, liked to catch me and kiss me, but she was not my mother; and I knew, and so did Mrs. Tyrrell, that because of this the doctor did not approve of such displays of affection.

Behind me, the nurse’s voice is calling, then fading. Gaudy yellow and orange panels spring out along the corridor, like the inside of a colour-box. My feet resound on the diamond-patterned linoleum. Each room is called after a saint; Saint Anne’s is at the end of the corridor.

He is in an armchair by the window, his back to the door, reading a newspaper. This amazes me: that having just judged the thousands of days in which we loved and respected one another as nothing, the doctor can turn to something as banal as a daily newspaper. Clamped behind each of his large hairy ears, like a leech, is a flesh-coloured hearing-aid. I move forward, into his line of vision.

“There is something I have to ask you.”

He looks up and the paper sinks into his lap. So many years have gone by and now it is as if the man I remember has not so much changed as faded. Dressed in a jacket and trousers that I recognise, he wears a blue shirt, slightly frayed at the collar. No tie though. Without the tie, the open neck of the shirt allows sight of his pale, stringy gullet. Large, horn-rimmed spectacles greatly magnify his pupils. He beholds me coldly and moistens his lips.

“I need some information,” I say. “It’s important.”

He tries to speak, but cannot find the words, for he has not expected this intrusion and could never believe that his instructions would be ignored.

“I bear you nothing but goodwill,” I say. “I am glad you are so well.”

The doctor straightens himself in his chair.

“Have you come to shame your father? Again?”

Mottled brown spots mark his face and the backs of his hands.

“You have a great-grandson. His name is Tim. He will be eight this year.”

A huge urge seizes me to relate the details of Tim’s dyslexia, for at my core I believe that of all the doctors in the world, only this old man can fully understand my grandson’s condition.

“I think he looks like my mother,” I say instead.

The doctor stares with such astonishment, as if the dead have suddenly appeared, that I want to wrap him in my arms. But he cries out, “I want him to leave! Nurse! Nurse!”

He attempts to resume his reading, I see with bewildered resentment, although a shake is evident in the spotted hands.

“A name, Dad. From the 1950s. It was a farmyard in the South Riding, all grass—even the way in was a field. Religious iconography everywhere. A husband and wife—the wife was your patient. They had a nephew, about my age. His name was Terence. Something happened. Something bad. Where did Terence go? What was their name?”

The doctor appears not to hear, then his shoulders rise in the merest shrug of unknowing, or indifference, and he peers at his newspaper as if suddenly absorbed by its contents. My hand sweeps the paper away.

“Fuck you! I’ll never see you again, but tell me what I want to know or I’ll pray you’ll have a hard death.”

Cherries of colour light up his cheeks.

“How dare you come back here! After the shame you brought on me?”

“You hate me because I succeeded where you failed. I wanted your love, but you are only capable of loving yourself.”

Trembling, I turn away. “You will never know.”

At the door to the room, I look back for one last sight of the head I once accepted as being at the centre of my universe.

From The Trout. Used with permission of Arcade Publishing. Copyright © 2017 by Peter Cunningham. 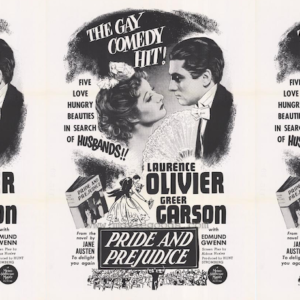 Lit Hub Daily: July 26, 2017 There’s no such thing as a historical novel: how we look to the past to write about the present. | Literary Hub ...
© LitHub
Back to top